Nigeria’s Catholic bishops lament the attack on a church during Pentecost Sunday Mass that left at least 50 people dead and scores of others injured.

LAGOS, Nigeria (CNS) — Condemning the actions of gunmen who attacked a Catholic Church as parishioners gathered for Mass on the feast of Pentecost, Nigeria’s Catholic bishops lamented that nowhere is safe in the country after the incident left dozens of people dead.

Archbishop Lucius Ugorji, president of the Nigerian Catholic bishops’ conference, released a statement from the bishops June 6, saying he was shocked and dismayed to learn of the attack a day earlier at St. Francis Xavier Church in Owo, a town in Ondo state in the southwestern part of the country.

Witnesses said unidentified gunmen began shooting at people during Mass and outside the church. The gunmen escaped and remained at large June 6.

Nigeria has experienced an increase in violence in recent months.

A doctor said at least 50 people had died and were taken to two hospitals, the Reuters news agency reported. The dead included children, witnesses said.

“Nowhere seems to be safe again in our country; not even the sacred precincts of a church,” said Archbishop Ugorji, who is preparing to be installed as the leader of the Archdiocese of Owerri June 22. 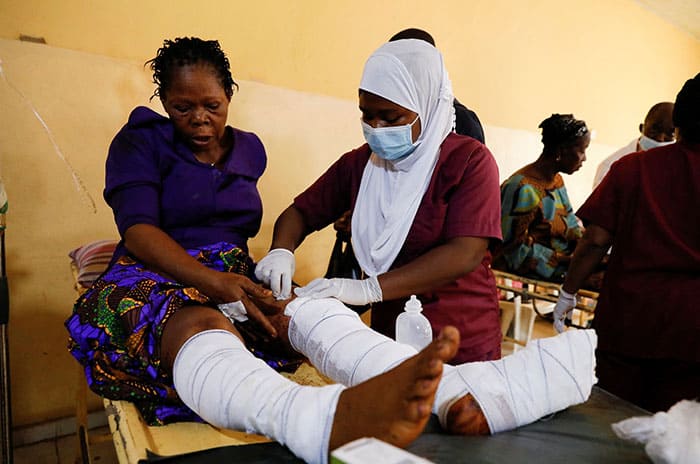 A nurse attends one of the victims of the attack by gunmen at St. Francis Xavier Church in Owo, at the Federal Medical Centre in Owo, Ondo, Nigeria. Reports said at least 50 people were killed in the attack. (CNS photo/Temilade Adelaja, Reuters)

“We condemn in the strongest terms the spilling of innocent blood in the house of God. The criminals responsible for such a sacrilegious and barbaric act demonstrate their lack of the sense of the sacred and the fear of the God,” he said.

The archbishop called on government to quickly find the gunmen, saying that if they were not taken into custody and prosecuted, he feared the country would descend into anarchy.

“The world is watching us. Above all, God is also watching us,” he added.

Ondo Governor Rotimi Akeredolu hours after the attack said his administration will do everything possible to find the perpetrators and prosecute them.

Saying through a spokesman that he was saddened by the unprovoked attack, Akeredolu said he spoke with Bishop Jude Arogundade of Ondo, who was traveling to Owo.

“The vile and satanic attack is a calculated assault on the peace-loving people of Owo kingdom who have enjoyed relative peace over the years, ” the spokesman quoted the governor as saying. “It is a black Sunday in Owo. Our hearts are heavy. Our peace and tranquility have been attacked by the enemies of the people. This is a personal loss, an attack on our dear state.”

Bishop Arogundade appealed for calm in the wake of the violence.

In a June 5 statement, the bishop acknowledged that the parish community was devastated by the violence and asked for prayers for peace in Nigeria and for normalcy to return to Owo and Ondo state.

“At this point in the history of our dear country, Nigeria, we need God’s ultimate intervention to restore peace and tranquility,” Bishop Arogundade said.

The Owo Diocese said that the parish priests were safe. Early social media reports erroneously said they had been kidnapped by the gunmen.

One of the priests, Father Andrew Abayomi, told local media that the attack occurred near the end of Mass when gunshots could be heard from different locations. 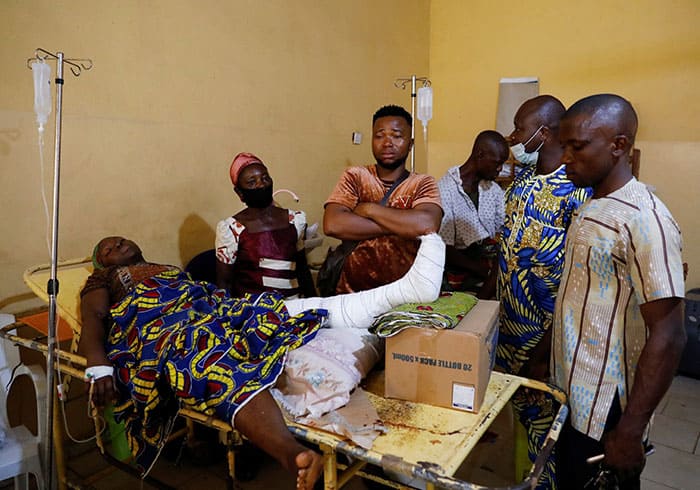 Relatives gather around one of the victims of the attack by gunmen during a Pentecost Mass at St. Francis Xavier Church in Owo, as she receives treatment at the Federal Medical Centre in Owo, Nigeria, June 6, 2022. (CNS photo/Temilade Adelaja, Reuters)

“We hid inside the church, but some people had left when the attack happened,” he said. “We locked ourselves inside the church for more than 20 minutes. It was when we heard that they had left that we opened the church and rushed the victims to the hospital.”

He said an unknown number of parishioners died in the attack.

At the Vatican, Pope Francis expressed his solidarity and closeness with Catholics in Nigeria in response to the violence.

“While the details of the incident are being clarified, Pope Francis prays for the victims and the country, painfully stricken in a moment of celebration, and entrusts both to the Lord, so that he may send his Spirit to comfort them,” said Matteo Bruni, director of the Vatican press office, in a statement June 5.

The attack met with swift condemnation from other prelates and community organizations.

Archbishop Alfred Adewale Martins of Lagos expressed concern for the victims and questioned the country’s existence to protecting innocent people.

“We have never had it so bad for our country to be failing in nearly all aspects of her corporate existence,” he said in a statement released June 5 by the archdiocese.

“Security is in shambles, the economy has failed as majority of Nigerians are living in extreme poverty, and even the trend in politics gives a lot of concern to the average Nigerian,” he said.

Nigerians are living in a time of fear and anxiety and that their concerns were not being addressed by the government, he said, while calling on Nigerian leaders to step up effort to prevent similar attacks.

“This only points to a failing state that has abdicated all its statutory responsibilities such that nonstate actors operate freely and with impunity,” the archbishop said.