Thousands of Christians have been hacked to death by militants in Nigeria in the first 200 days of 2021, a recent investigation has established, further revealing that the number is the highest in years.

The report by the International Society for Civil Liberties and Rule of Law (Intersociety) indicates that at least 3,000 Christians, including ten Priests and Pastors, were murdered in Nigeria from the beginning of this year to July 18.

“The number of defenseless Christians hacked to death by Nigeria’s Islamic Jihadists and their collaborators in the security forces in the past 200 days or 1st January to 18th July 2021 has risen to no fewer than 3,462 and this is just sixty-eight deaths less than the total deaths of Nigerian Christians in 2020, which the Open Doors’ World Watch List of Persecuted Christians put at 3,530,” Intersociety says in its 2021 report.

Broken down, the figure translates to 17 Christians being murdered daily in Nigeria, especially in States experiencing extreme militant attacks.

Further, the figure is second highest since 2014 when over 5,000 Christian deaths were recorded in the hands of Boko Haram and Jihadist Fulani Herdsmen, authors of the Intersociety report have observed.

The report indicates that while Boko Haram was responsible for the death of over 4,000 Christians in 2014, the Jihadist Fulani Herdsmen accounted for 1,229 Christian deaths.

Intersociety is a research and investigative rights group, which has been monitoring and investigating religious persecution and other forms of religious violence by State and non-State actors across Nigeria since 2010.

This, the human rights group does through the use of direct contacts with the victims, eyewitnesses, media tracking, review of credible local and international reports, interviews and closed sources among other methods. 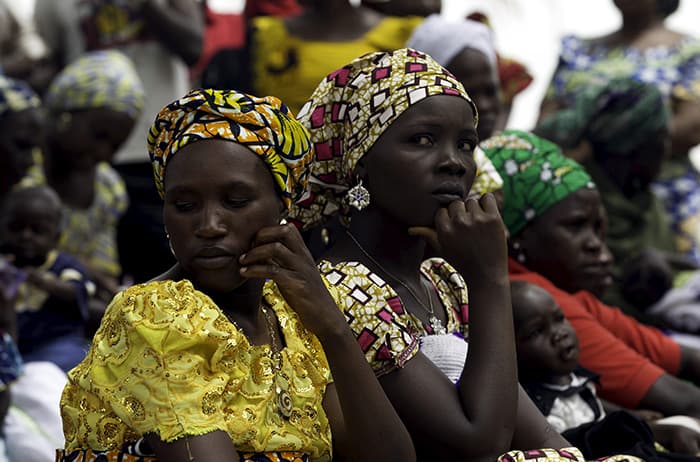 Displaced members of the Chibok community in Abuja, Nigeria, gather April 14, 2015, to mark the first anniversary of the mass kidnapping of 276 schoolgirls from a secondary school in Chibok by Boko Haram militants. As of July 16, 2021, the whereabouts of 112 girls remained unaccounted for. (CNS photo/Afolabi Sotunde, Reuters)

The investigation found out that at least three out of every 30 abducted Christians were most likely to have died in captivity, thereby indicating additional secret death in jihadists’ captivity of 300 Christians.

Additional deaths of 150 are also added to represent what the team of investigators refer to as “dark figures”, implying deaths that occurred but not reported or recorded.

Additionally, the number of churches threatened or attacked and closed or destroyed or burnt since January 2021 is also estimated to be around 300, with at least ten Priests or Pastors abducted or killed by the jihadists, the investigators say in the report signed by their Board Chair & Lead-Researcher, Emeka Umeagbalasi.

They say that Taraba State in North Eastern Nigeria was discovered to be the most affected with at least 70 churches threatened or attacked and closed or burnt or destroyed.

The leadership of the human rights group finds it “deeply saddening” that to date, those responsible for the anti-Christian butcheries in the country have continued to evade justice and remained unchecked, untracked, uninvestigated and untried; leading to impunity and repeat-atrocities.

According to the organization, surviving victims and families of the dead victims are also totally abandoned by the Government of Nigeria.

The organization notes that the Nigerian Government has continued to face sharp criticisms and strong accusations of culpability and complicity in the killings and supervision of the same.

“The country’s security forces have so fumbled and compromised that they hardly intervene when the vulnerable Christians are in danger of threats or attacks, but only emerge after such attacks to arrest and frame up the same population threatened or attacked,” the investigators report.

They add, “In the North, the jihadists operate freely under the cover and protection of the security forces; abducting, killing, looting, destroying or burning and forcefully converting their captive and unprotected Christians and their homes and sacred places of worship and learning. But the same security forces hatefully and brutally respond with utter ferocity against Southern and Northern Christians accused of infraction or offending the law.”

They are followed by Boko Haram, the Islamic State in West Africa Province (ISWAP) and Muslim Fulani bandits who jointly killed 1,063 Christians, while Nigerian Army, joined by the Nigeria Police Force and other branches of the Armed Forces accounted for 490 Christian deaths.

“The Muslim Fulani Bandits, originally formed in Zamfara State in 2011, are jointly responsible for terrors going on in Christian parts of Southern Kaduna, Niger, FCT, Nasarawa and Kogi States,” those behind the report say.

The Fulani bandits, according to the job report, are also responsible for attacks on indigenous Hausa Muslims in Zamfara, Katsina, Sokoto and Kebbi.

In Kebbi State in North-western Nigeria, for instance, the Muslim Fulani bandits target and kill or abduct both Christians and Muslims, holding against their fellow Muslims a jihadist belief that the “indigenous Hausa Muslims are not pure Muslims,” the Intersociety reports.

For a similar belief, the bandits are also staging what the organization refers to as “ferocious jihadist attacks” against their fellow Muslims in Zamfara, Katsina, Sokoto, and Muslim areas of Kaduna and Niger States.

Featured image: Soldiers from Chad drive in the retaken town of Damasak, Nigeria, March 18, 2015. Armies from Nigeria, Cameroon, Chad and Niger launched an offensive to end Boko Haram’s six-year campaign, which has killed thousands in northern Nigeria and spilled over into Cameroon and Niger. (CNS photo/Emmanuel Braun, Reuters)