Advocates are frustrated that DACA is on hold while progress toward legislation allowing dreamers to remain in the U.S. has stagnated.

WASHINGTON (CNS) — Standing outside the U.S. Capitol pleading with lawmakers to grant her and her peers a path toward citizenship is not how DACA “dreamer” Zuleyma Barajas pictured her life 10 years after she was granted a temporary solution to remain in the U.S.

Barajas believed her future included permanent residency, then citizenship, after President Barack Obama announced, through an executive order June 15, 2012, he was extending protections for young adults who, like her, were brought into the country illegally as minors — via the Deferred Action for Childhood Arrivals.

The program, commonly known as DACA, gave her a reprieve from deportation, documents to work and drive, and hope that Congress would soon work together to find a permanent fix. Obama announced it as temporary “stopgap” measure.

“I expected we’d be fighting another fight,” Barajas told Catholic News Service June 15 outside the U.S. Capitol, saying she was “definitely frustrated” that absolutely nothing has happened in 10 years.

She said she wanted to ask lawmakers: “What is it that you need to hear? We’ve taken the necessary steps.”

A politically divided Congress, however, has not been able to agree on a comprehensive immigration plan, nor a bill to offer the approximately 760,000 DACA recipients a path to citizenship.

Auxiliary Bishop Mario E. Dorsonville of Washington, who is chairman of the U.S. Conference of Catholic Bishops’ Committee on Migration, said on the anniversary of DACA that in the years that have passed “its beneficiaries have come to be known for their abundant contributions to our society.”

“But after a decade of temporary relief, most DACA recipients still face uncertainty about their future in this country, to say nothing of their families, including hundreds of thousands of U.S.-citizen children, employers and the communities that depend on them,” he said in a statement.

“For those confronted by this reality, the church remains committed to walking with you and seeing this injustice remedied, furthering God’s plan,” he said.

While DACA “was never a cure for the underlying challenges” recipients faced, Bishop Dorsonville said, “it was a welcome step toward recognizing their inherent dignity and unrealized potential.” 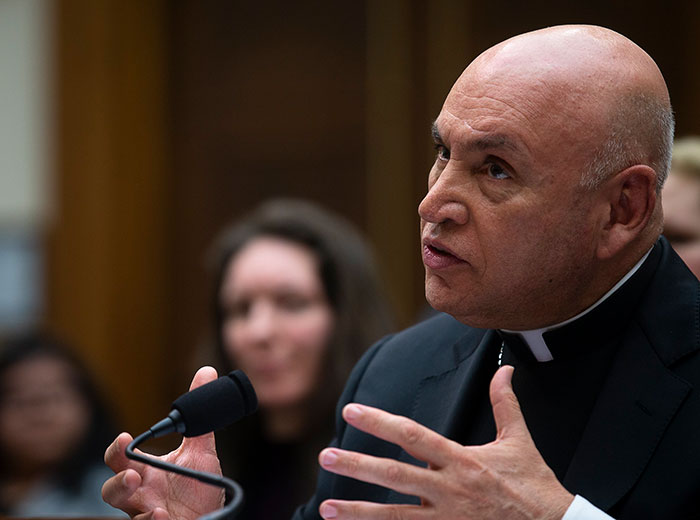 “Only Congress can ensure the full integration of this population. We therefore urge legislators to make this moment the long-awaited inflection point that leads to a permanent solution … one of many steps to address an immigration system in desperate need of reform,” Bishop Dorsonville said.

Via Twitter, President Joe Biden, who was vice president during the Obama administration, said DACA was “one of our proudest accomplishments.”

“On this 10th DACA Anniversary, we celebrate the transformational impact it’s had on hundreds of thousands of young people. It’s time for Congress to make this permanent now,” he said.

Fran Eskin-Royer, executive director of the National Advocacy Center of the Sisters of the Good Shepherd, speaking in favor of DACA recipients, said in a June 15 news release that it was time to “end their nightmares; give them back their dreams.”

“Children embody our hope; our dreams. And dreams embody the American spirit and opportunity. What does it say if we rip away the dreams of our children?” she asked.

Most Americans want them to stay in the U.S., she said.

In June 2020, a poll by the Pew Research Center showed that close to three-quarters of U.S. adults said they favored granting DACA recipients permanent legal status.

Neil Bradley, the U.S. Chamber of Commerce’s executive vice president and chief policy officer, said in a statement that it was “outrageous and unacceptable that after a decade of debate, Republicans and Democrats in Congress have not been able to come together and enact legislation” to protect them.

Business groups such as the American Business Immigration Coalition echoed the call from Bradley in demanding that Congress do something.

“Brought here as children, the vast majority of these young men and women know no other home than the U.S.,” he said. “They have been educated here and they contribute to their communities and the businesses where they work. Some have even started their own business where they employ other Americans. That is the American dream.”