Advocates Say Congress Must Act After Ruling Against DACA

Ruling bars the government from approving new DACA applications but leaves it for current participants.

WASHINGTON (CNS) — Catholic immigration advocates are urging Congress and President Joe Biden to speed up legislation to protect immigrants after a federal judge ruled to end a program that prevents the deportation of thousands of immigrants brought into the U.S. illegally as children.

These groups immediately took to social media to respond to the July 16 decision by U.S. District Judge Andrew Hanen, who said the Deferred Action for Childhood Arrivals, or DACA, was illegal.

His ruling, which plaintiffs plan to appeal, bars the government from approving any new applications to the program but leaves it in place for current participants.

The decision means that “tens of thousands of people who applied but had their initial cases stuck in limbo due to crisis-level processing delays … will not receive life-altering protection from deportation or stability, security, opportunity,” tweeted Lisa Parisio, director of advocacy for Catholic Legal Immigration Network, or CLINIC.

“We must meet this moment and we must all make it impossible for Congress not to deliver. This is way past enough,” she said of the “politically motivated, inhumane, morally bankrupt decision.”

Hanen ruled in favor of Texas and eight other states that filed suit in 2018 against DACA on the grounds that former President Barack Obama, who created the program by executive order in 2012, did not have the authority to do so because he bypassed Congress.

The states that joined Texas in the lawsuit – Alabama, Arkansas, Kansas, Louisiana, Mississippi, Nebraska, South Carolina and West Virginia– also said the program has been a financial strain. 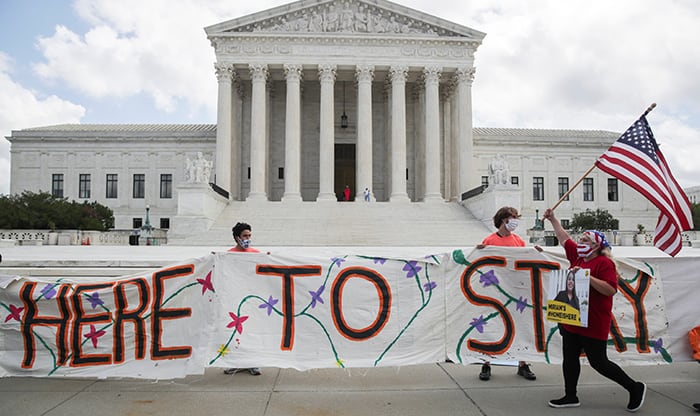 Beneficiaries of the Deferred Action for Childhood Arrivals program and their supporters celebrate outside the U.S. Supreme Court in Washington June 18, 2020, after the high court upheld DACA in a challenge brought by the Trump administration. Judge Andrew S. Hanen of the U.S. District Court for the Southern District of Texas in Houston ruled July 16, 2021, that DACA is unlawful, nine years after it was created by President Barack Obama by executive order. (CNS photo/Jonathan Ernst, Reuters)

DACA has enabled about 700,000 qualifying young people, described as Dreamers to work, go to college, get health insurance, a driver’s license and not face deportation. These young adults were brought to the U.S. as children by their parents without legal documentation.

In a June 19 statement, Washington Auxiliary Bishop Mario E. Dorsonville, chairman of the Committee on Migration of the U.S. Conference of Catholic Bishops, said the bishops were disappointed with judge’s ruling, but they have also known “that DACA was never meant to be a permanent solution for Dreamers.”

“This ruling is simply the most recent development in a long list of events warranting action by Congress,” he said.

Similarly, Anna Gallagher, CLINIC’s executive director, said in July 19 statement that the decision “underscores yet again the urgency for Congress and the Biden administration to prioritize, protect and respect the human rights and dignity of undocumented immigrants in this country.”

He said the ruling was “yet another blow to DACA recipients and especially to new DACA applicants” and is a reminder that “immigrants with temporary protection will always be vulnerable to attacks and legal challenges.”

“Temporary protection isn’t a solution and should never be,” he added.

In response to the Supreme Court’s ruling, the USCCB urged President Donald Trump to “strongly reconsider terminating DACA” and they also urged U.S. senators to “immediately pass legislation that provides a path to citizenship” for Dreamers, stressing that this kind of “permanent legislative protection” is long overdue.

“Texas does not have the right to dictate federal immigration policy or to upend the lives of hundreds of thousands of DACA recipients. Congress and the President must act decisively and swiftly to enact lasting protections for Dreamers, including a pathway to citizenship,” tweeted Hope Border Institute July 16.

Similarly, the Cabrini Immigrant Services of New York tweeted: “We demand that Congress and @POTUS take immediate action to provide a pathway to citizenship. We cannot wait any longer. There are NO excuses.”

Hanen similarly indicated that Congress needs to step in. When he rejected Texas’ request in 2018 to end DACA through a preliminary injunction, he wrote at the time: “If the nation truly wants to have a DACA program, it is up to Congress to say so.”

Currently, a Senate committee is considering the American Dream and Promise Act of 2021. The House passed its version of the measure in March, along with the Farm Workforce Modernization Act, which provides a path to legal status for farmworkers.

The American Dream measure would create a “conditional permanent resident” status valid for up to 10 years that would protect DACA recipients and other Dreamers from deportation, allow them to work legally in the U.S. and permit them to travel outside the country – if they meet several requirements.

On DACA’s ninth anniversary June 15, Bishop Dorsonville implored Congress to act on creating a pathway to citizenship for those in the program.

He also submitted written testimony that same day for a hearing by the Senate Judiciary Committee on the proposed bipartisan legislation to help Dreamers. The bishop stressed that DACA recipients – along with Temporary Protected Status and Deferred Enforced Departure holders, migrant agricultural workers and essential workers in the country without documents – deserve relief.

The bishop said the USCCB has worked with members in the House and Senate on drafting the first versions of the DREAM Act in 2000 and 2001, which stands for the Development, Relief and Education for Alien Minors Act.

He said the bishops have been “calling for passage of such a measure ever since.”

Featured image: Supporters of the Deferred Action for Childhood Arrivals program are seen in San Diego June 18, 2020. Judge Andrew S. Hanen of the U.S. District Court for the Southern District of Texas in Houston ruled July 16, 2021, that DACA is unlawful, nine years after it was created by President Barack Obama by executive order. (CNS photo/Mike Blake, Reuters)