In one of the most anticipated cases of the term, the Supreme Court on June 18 ruled against efforts by the Trump administration to end the Deferred Action for Childhood Arrivals program, known as DACA.

In a 5-4 decision, the court said the Trump administration’s actions in rescinding the program were “arbitrary and capricious.”

Last November, the court examined three separate appellate court rulings that blocked President Donald Trump’s 2017 executive order to end DACA, a program that started in 2012 by executive order under the Obama administration and which has enabled about 700,000 qualifying young people, described as “Dreamers,” to work, go to college, get health insurance, a driver’s license and not face deportation. These young adults were brought to the U.S. as children by their parents without legal documentation.

“We welcome the U.S. Supreme Court’s decision noting that the Trump administration did not follow proper administrative procedures required to repeal the DACA program,” said a statement by the U.S. Conference of Catholic Bishops.

“To DACA youth, through today’s decision and beyond, we will continue to accompany you and your families. You are a vital part of our church and our community of faith. We are with you,” said the statement by Archbishop Jose H. Gomez of Los Angeles, president of the U.S. Conference of Catholic Bishops, and Washington Auxiliary Bishop Mario E. Dorsonville, chairman of the USCCB’s Committee on Migration.

The bishops urged the president to “strongly reconsider terminating DACA,” noting that “immigrant communities are really hurting now amidst COVID-19 and moving forward with this action needlessly places many families into further anxiety and chaos.”

They also urged U.S. senators to “immediately pass legislation that provides a path to citizenship for ‘Dreamers.’ Permanent legislative protection that overcomes partisanship and puts the human dignity and future of ‘Dreamers’ first is long overdue.” 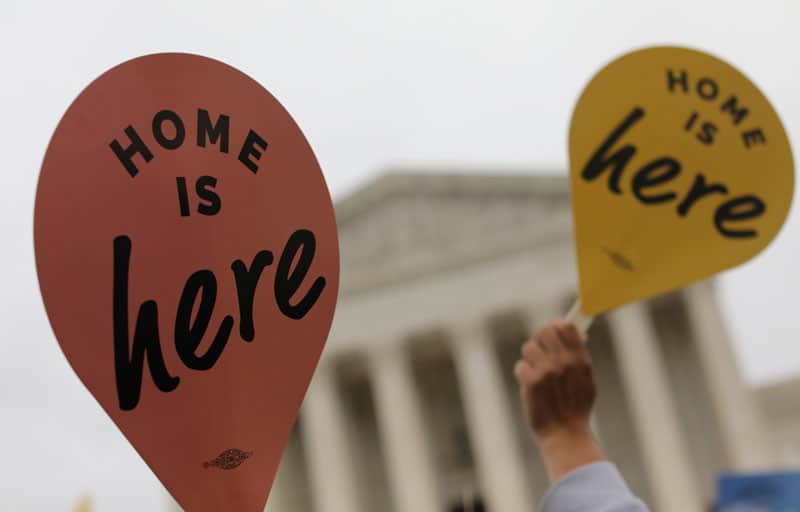 DACA demonstrators hold signs outside the U.S. Supreme Court in Washington Nov. 12, 2019. In a 5-4 decision June 18, 2020, the Supreme Court rejected President Donald Trump’s executive order to cancel the Deferred Action for Childhood Arrivals program, which provides legal protections and work authorization to immigrants brought to the U.S. as children by their parents without legal documents. (CNS photo/Jonathan Ernst, Reuters)

The court’s majority opinion, written by Chief Justice John Roberts, points out that the court’s action does not stop future efforts to end DACA but that the government failed to give acceptable reasons for ending it. It said acting Homeland Security Secretary Elaine Duke, in her efforts to dismantle DACA in 2017, didn’t use all options to limit the program and didn’t consider just how important it was to participants.

“Here the agency failed to consider the conspicuous issues of whether to retain forbearance and what if anything to do about the hardship to DACA recipients,” the opinion said. “That dual failure raises doubts about whether the agency appreciated the scope of its discretion or exercised that discretion in a reasonable manner. The appropriate recourse is therefore to remand to DHS so that it may consider the problem anew.”

Roberts was joined in the majority by Justices Ruth Bader Ginsburg, Stephen Breyer, Elena Kagan and Sonia Sotomayor. Justices Clarence Thomas, Samuel Alito, Neil Gorsuch and Brett Kavanaugh dissented from the decision and said they would have permitted the Trump administration’s efforts to end the program.

Trump responded to the court’s decision with the tweet: “Do you get the impression that the Supreme Court doesn’t like me?” and another tweet saying: “These horrible and politically charged decisions coming out of the Supreme Court are shotgun blasts into the face of people that are proud to call themselves Republicans or Conservatives.”

In the dissenting opinion, Thomas wrote: “Today’s decision must be recognized for what it is: an effort to avoid a politically controversial but legally correct decision.”

He also said the court’s action simply provided a stopgap measure to protect DACA recipients but has given “the green light for future political battles to be fought in this court rather than where they rightfully belong — the political branches.” 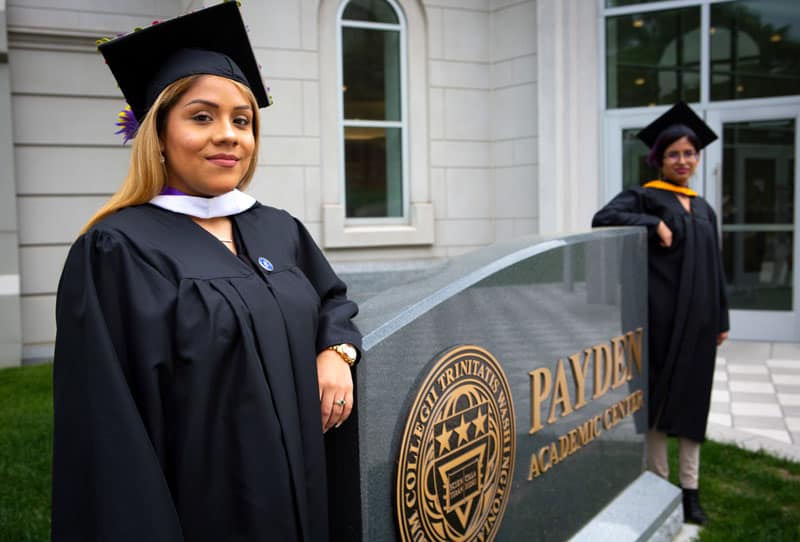 Brenda and Yarely — two “Dreamers” posing for a photo before their 2018 graduation from Trinity Washington University — consider themselves symbols of the Deferred Action for Childhood Arrivals program, known as DACA, which provides legal protections and work authorization to immigrants brought to the U.S. as children by their parents without legal documents. (CNS photo/Chaz Muth)

Catholic leaders joined more than 35 other groups in filing friend-of-the-court briefs urging the court to support the DACA program. And many Catholic leaders reacted positively with statements and tweets immediately after the decision was announced.

“Thank God the Supreme Court recognized the human dignity of #DACA recipients,” tweeted Bishop John E. Stowe of Lexington Kentucky, while Archbishop Gustavo Garcia-Siller of San Antonio tweeted: “DACA young adults and families, today, your tears are tears of joy. We are with you!”

Sister Patricia McDermott, president of the Sisters of Mercy, said in a statement the court’s decision affirms what the Mercy sisters “have believed all along. These young immigrants are our neighbors, they share our pews, they are in our universities and they are here to stay!”

Pat McGuire, president of Trinity Washington University, which has 100 DACA undergraduate students, told Catholic News Service in an email that the court’s decision is a “triumph for justice in America.”

“Young people whose presence in this country is a result of their parents’ flight from violence and oppression in search of a better life deserve respect, support and every opportunity to succeed in American society,” she said. She also said the efforts to rescind DACA “caused immense pain and suffering among Dreamers who did nothing wrong, who have been striving for better lives for themselves and their families.”

Featured Image: News crews film supporters of the Deferred Action for Childhood Arrivals program holding signs and cheering at the U.S. Supreme Court in Washington June 18, 2020, after the justices handed down a 5-4 ruling rejecting President Donald Trump’s executive order to cancel DACA. The program was established by the Obama administration to provide legal protections and work authorization to immigrants brought to the U.S. as children by their parents without legal documents. (CNS photo/Rhina Guidos)