VATICAN CITY (CNS) — From a vaccination clinic in the atrium of the Vatican audience hall to a visit to the ancient Iraqi city of Ur and later to a refugee camp in Lesbos, Greece, Pope Francis demonstrated throughout 2021 what he means by seeing all people as brothers or sisters.

Pope Francis issued his social encyclical, “Fratelli Tutti, on Fraternity and Social Friendship,” in October 2020, then proceeded to explain and apply it in 2021 in meetings with migrants and refugees, in hosting religious leaders making a plea to governments to act on climate change and in setting out his vision for a synod process that listens to and relies on the prayers of all Catholics.

In March, with representatives of Muslim, Christian, Yazidi and other religious communities in Iraq, Pope Francis made a pilgrimage to Ur, an archaeological dig on a dusty desert plain about 10 miles from modern-day Nasiriyah.

There, at the birthplace of the patriarch Abraham, the first person to believe in the one God and father of all, the pope called all believers to demonstrate their faith by treating one another as the brothers and sisters they are.

“From this place, where faith was born, from the land of our father Abraham, let us affirm that God is merciful and that the greatest blasphemy is to profane his name by hating our brothers and sisters,” the pope said.

And meeting in Cyprus and in Greece with refugees and asylum-seekers, he called for individual action, national policies and international cooperation that would recognize each one of them as a member of the human family deserving of a helping hand.

“God loves us as his children; he wants us to be brothers and sisters,” the pope said Dec. 5 in the camp on the shore of the Mediterranean on the Greek island of Lesbos. “He is offended when we despise the men and women created in his image, leaving them at the mercy of the waves, in the wash of indifference.” 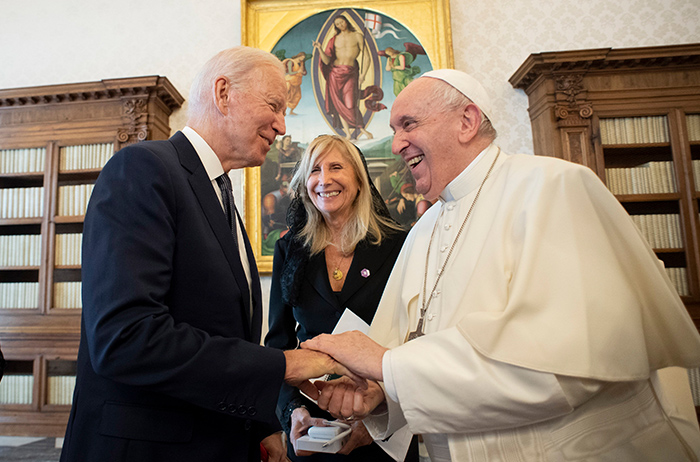 U.S. President Joe Biden greets Pope Francis during a meeting at the Vatican Oct. 29, 2021. Biden, the nation’s second Catholic president, spent 75 minutes talking to the pope privately and later told reporters that the pope had indicated that he was a “good Catholic.” (CNS photo/Vatican Media)

As in 2020, Pope Francis’ activities throughout the year were modified or impacted by the ongoing COVID-19 pandemic, the precautions needed to slow its spread and advocacy for greater access to vaccines for everyone.

In January and February, Pope Francis and retired Pope Benedict XVI got their two doses of the Pfizer vaccine; they both received their booster shots in October.

First in the atrium of the audience hall and later in the Charlemagne Wing under the colonnade in St. Peter’s Square, the Vatican vaccinated not only its residents and employees, but also the residents of Vatican-owned shelters for the homeless and many of the people who regularly seek showers, barbers, doctors and food at the Vatican.

But a different health concern landed the pope in Rome’s Gemelli hospital for 10 days in July for colon surgery. The Vatican said the pope scheduled his operation to treat “a symptomatic diverticular stenosis of the colon.”

He underwent a three-hour surgery that included a left hemicolectomy, which is the removal of the descending part of the colon, a surgery that can be recommended to treat diverticulitis, when bulging pouches in the lining of the intestine or colon become inflamed or infected.

The only scheduled event Pope Francis skipped during his recovery was a Mass July 25 to mark the first World Day for Grandparents and the Elderly. He had been released from the hospital July 14. 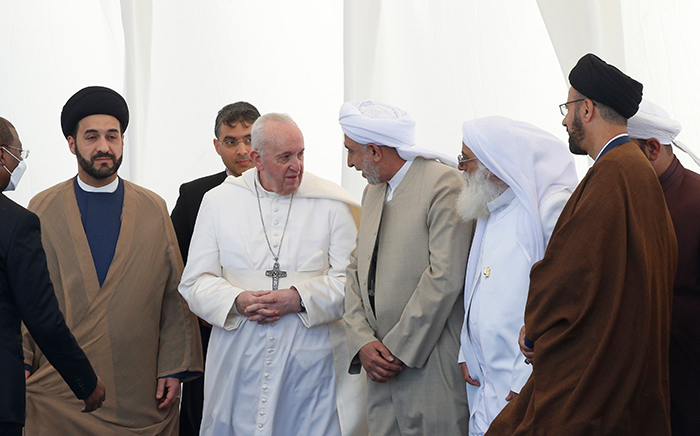 Pope Francis talks with a religious leader during an interreligious meeting on the plain of Ur near Nasiriyah, Iraq, March 6, 2021. Despite security and COVID-19 risks, the pope completed a successful visit to Iraq. (CNS photo/Paul Haring)

But the pandemic restrictions played more havoc with the papal schedule, forcing either the postponement of big events or a limit on attendance. In 2021, Pope Francis celebrated no Masses for the canonization of new saints, and he held no consistory to create new cardinals.

Even one of the largest celebrations of the year — a day of reflection Oct. 9 and a Mass Oct. 10 to launch the process leading to the assembly of the Synod of Bishops in 2023 — included many key people participating virtually because of pandemic travel restrictions.

Vaccinated, and often masked, Pope Francis did some traveling of his own, visiting Iraq in March, Hungary and Slovakia in September and Cyprus and Greece in December, just two weeks before his 85th birthday Dec. 17.

He also hosted a visit by U.S. President Joe Biden in late October. The Vatican, citing COVID-19 restrictions, did not allow reporters into the Apostolic Palace for the visit, so the public record of the meeting consisted of a brief official statement from the Vatican and ad-lib comments from the president.

The meeting was an unusually long 90 minutes, including 75 minutes of private talks between the pope and president.

Asked if abortion was one of the topics of his meeting with the pope, Biden told reporters, “We just talked about the fact he was happy that I was a good Catholic, and I should keep receiving Communion.” The Vatican offered no comment on the president’s remarks.

Although Pope Francis issued no encyclicals or apostolic exhortations in 2021, he promulgated two documents that made headlines around the world: “Traditionis Custodes” (Guardians of the Tradition), restoring limits on the celebration of the pre-Vatican II Mass; and the revision of the Code of Canon Law’s “Book VI: Penal Sanctions in the Church” particularly to incorporate changes made over the past 15 years to protect children, promote the investigation of allegations of clerical sexual abuse and punish offenders.

The pope also showed some special attention to his “sisters” in the Lord, amending canon law to allow both women and men to be installed formally in the ministries of lector and acolyte; naming Xavière Missionary Sister Nathalie Becquart one of two undersecretaries of the Synod of Bishops; and appointing Sister Raffaella Petrini, a Franciscan Sister of the Eucharist, to be the first female secretary-general of the office governing Vatican City State.

Featured image: Pope Francis participates in a memorial prayer for the victims of the war at Hosh al-Bieaa, the church square, in Mosul, Iraq, March 7, 2021. Despite security and COVID-19 risks, the pope completed a successful visit to Iraq. (CNS photo/Paul Haring)