Visiting the Greek island of Lesbos, Pope Francis speaks to the nations of the European Union and  governments around the world about responding to refugees.

MYTILENE, Greece (CNS) — Standing in a tent on the shore, Pope Francis said the Mediterranean Sea, “the cradle of so many civilizations, now looks like a mirror of death.”

He was speaking Dec. 5 to Greek and U.N. officials, but especially residents at the Mavrovouni refugee camp, formally called the Reception and Identification Center. But he also was speaking to the nations of the European Union and to governments around the world.

About 2,200 people, including minors who made their journey across the sea without a parent or other adult, call Mavrovouni home. They live in orderly rows of tents and small pre-fab shelters on the Greek island of Lesbos outside of Mytilene. The center replaced the infamous Moira camp after a fire in 2020.

The Greek government now moves refugees and asylum-seekers throughout the country, taking pressure — and media attention — off Lesbos and other islands close to Turkey. The Ministry of Migration and Asylum said that at the end of October, 4,352 migrants and refugees were living on Lesbos compared to the 18,872 who were there in October 2020.

While the government’s idea is that asylum-seekers will spend only a few months in camps on Lesbos before moving to an apartment or being transferred to the mainland, many at Mavrovouni told reporters accompanying the pope that they had been there for years.

Mohammadi Zagul, a 34-year-old mother of five from Afghanistan, said she and her family have been on Lesbos for two years. They want to leave the camp and start a real life, she said, but it does not really matter in what country. 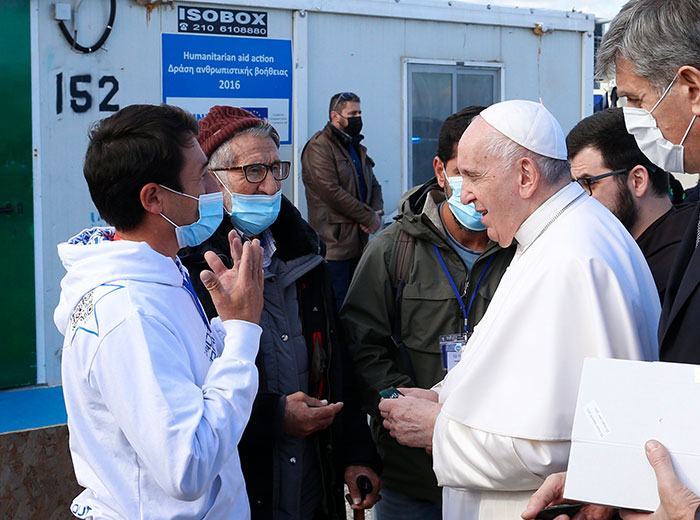 Pope Francis speaks with a man during a visit with refugees at the government-run Reception and Identification Center in Mytilene, Greece, Dec. 5, 2021. (CNS photo/Paul Haring)

Christian Tango Mukalya, a 30-year-old Congolese Catholic who arrived on Lesbos more than a year ago with two of his three small children, told Pope Francis that he and the others want only “a safe place in Europe for the future of our families.”

“I am a pilgrim,” he said, “an asylum-seeker in search of a safe refuge” after “persecution and death threats in my country of origin.”

Visiting the camp on a Sunday morning, Pope Francis used verbs from the Advent Scripture readings to pray that God would “rouse” and “shake” and “awaken” the consciences of everyone to respond to the desperate plight of migrants and refugees in Greece and around the world.

With Greek President Katerina Sakellaropoulou in attendance, the pope once again called the European community to task for insisting countries where migrants arrive enforce European Union immigration policies but doing little to help those countries manage the migration flows.

Basically, he accused the European Union of hypocrisy.

“In Europe there are those who persist in treating the problem as a matter that does not concern them,” the pope said. “How many conditions exist that are unworthy of human beings! How many hotspots where migrants and refugees live in borderline conditions, without glimpsing solutions on the horizon!”

And yet, he said, the EU “is constantly promoting” respect for human rights worldwide and insisting to others that “the dignity of each person ought to come before all else.”

A professed belief in human dignity, he said, must spur nations to work together to come up with intelligent, comprehensive policies to meet the immediate needs of those who feel forced to flee their homelands and to help them find a home where they and their families can start again. 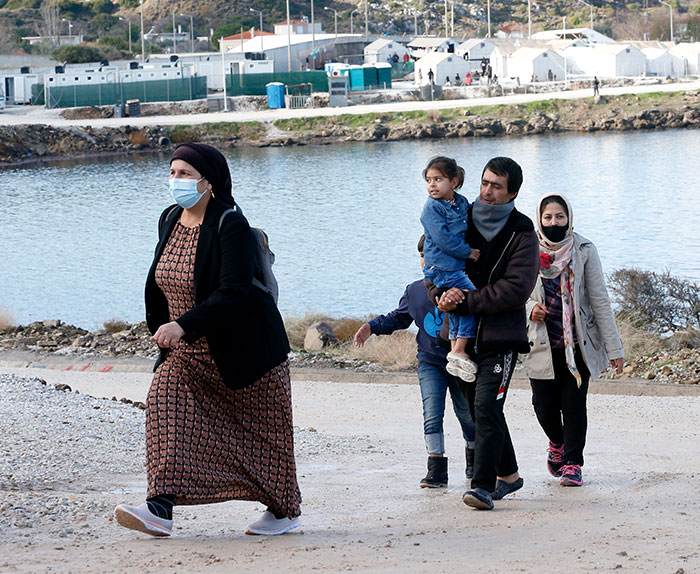 Refugees arrive for a visit with Pope Francis at the government-run Reception and Identification Center in Mytilene, Greece, Dec. 5, 2021. (CNS photo/Paul Haring)

“It is easy to stir up public opinion by instilling fear of others,” Pope Francis said. “Yet why do we fail to speak with equal vehemence about the exploitation of the poor, about seldom-mentioned but often well-financed wars, about economic agreements where the people have to pay, about covert deals to traffic in arms, favoring the proliferation of the arms trade?”

The causes of migration “should be attacked, not the poor people who pay the consequences and are even used for political propaganda,” he insisted.

Christians have a special obligation to reject political rhetoric that paints migrants as a threat, he said. “God loves us as his children; he wants us to be brothers and sisters. Instead, he is offended when we despise the men and women created in his image, leaving them at the mercy of the waves, in the wash of indifference, justified at times even in the name of supposedly Christian values.”

With a gentle breeze only slightly rippling the water behind him, Pope Francis urged everyone — government leaders and individual citizens — to look at the faces of the migrant children.

“May we find the courage to feel ashamed in their presence; in their innocence, they are our future,” he said. “They challenge our consciences and ask us: ‘What kind of world do you want to give us?'”

“Let us not hastily turn away from the shocking pictures of their tiny bodies lying lifeless on the beaches,” the pope said. “The Mediterranean, which for millennia has brought different peoples and distant lands together, is now becoming a grim cemetery without tombstones.”

“Please,” he pleaded, “let us stop this shipwreck of civilization!”