Biden Thanks Pope for Speaking Up for the Poor, Fighting Climate Crisis
By Catholic News Service
Oct 29, 2021
News
ShareTweet it!LinkedinEmailPrint

VATICAN CITY (CNS) — Pope Francis and U.S. President Joe Biden had an unusually long meeting at the Vatican Oct. 29, talking about the climate crisis and poverty, among other issues.

The Vatican described the president’s meetings with both the pope and with top Vatican diplomats as consisting of “cordial discussions,” with both sides “focused on the joint commitment to the protection and care of the planet, the health care situation and the fight against the COVID-19 pandemic.”

They also discussed “refugees and assistance to migrants,” the Vatican said, and “reference was also made to the protection of human rights, including freedom of religion and conscience.”

The pope and the president also exchanged “views on some matters regarding the current international situation, also in the context of the imminent G20 summit in Rome, and on the promotion of peace in the world through political negotiation,” it said.

According to a statement released by the White House, “President Biden thanked His Holiness for his advocacy for the world’s poor and those suffering from hunger, conflict and persecution.

“He lauded Pope Francis’ leadership in fighting the climate crisis, as well as his advocacy to ensure the pandemic ends for everyone through vaccine sharing and an equitable global economic recovery,” the statement said.

The president later told reporters that the two did not talk about abortion.

Some U.S. bishops have argued that Biden, who regularly attends Mass, should not receive Communion because of his support for legalized abortion, while Catholic Church teaching emphasizes the sacredness of human life from conception to natural death.

Asked if abortion was one of the topics of his meeting with the pope, Biden responded, “We just talked about the fact he was happy that I was a good Catholic, and I should keep receiving Communion.” 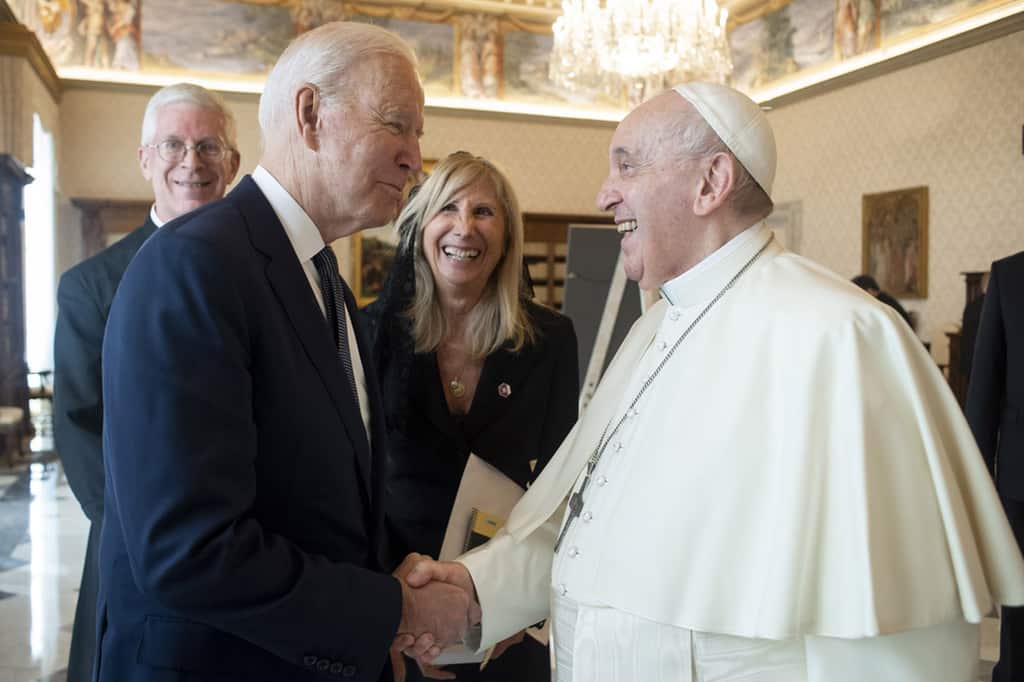 During a nearly 90-minute meeting in the library of the Apostolic Palace, which included 75 minutes of closed-door discussions between the two leaders, Pope Francis gave Biden a large painted ceramic tile of a pilgrim walking along Rome’s Tiber River and pointing to St. Peter’s Basilica in the distance. It and its border of shell designs symbolize “protection from adversity” during one’s spiritual growth and the hope of reaching a deeper and more fulfilling purpose at the end of this spiritual journey, according to an explanation of the artistic piece.

Pope Francis also gave the president a signed copy of his message for World Day of Peace 2021, a collection of his major documents, including his document on human fraternity, and the book, “Why Are You Afraid? Have You No Faith? The World Facing the Pandemic.” The book contains photographs and homilies, messages and prayers the pope delivered during the pandemic, emphasizing the importance of love, hope, solidarity and the common good.

Biden presented Pope Francis with a framed, handwoven “fiddleback” chasuble that had been made by Gamarellis, the famous Rome tailor shop, in 1930, for Jesuits in the United States. The White House was also making a donation of winter clothing to charities in the name of Pope Francis to commemorate the World Day of the Poor Nov. 14.

Biden also gave the pope a copy of his memoir, “Promise Me, Dad: A Year of Hope, Hardship, and Purpose,” about losing his firstborn son, Beau Biden, to brain cancer at the age of 46 and a presidential command coin inscribed with the unit of his late son, who had been deployed to Iraq in 2008. 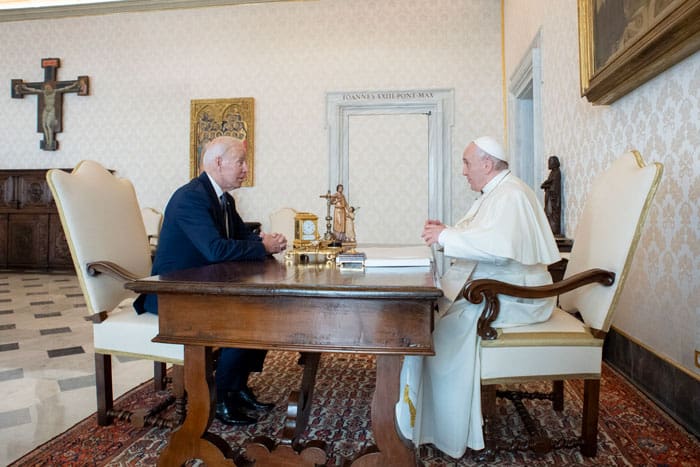 Biden explained the reason for the coin to the pope, “I’m not sure this is appropriate, but there’s a tradition in America that the president has what is called a command coin that he gives to warriors and leaders and you are the most significant warrior for peace I’ve ever met.”

“And with your permission, I’d like to give you this coin,” he said, saying, “I know my son would want me to give this to you.”

“The tradition — I’m only kidding about this — next time I see you, if you don’t have it, you have to buy the drinks,” Biden said, adding, however, “I’m the only Irishman you’ve ever met who’s never had a drink.”

Later, as the pope walked Biden to the door, he thanked him for the visit and “for this,” he said, clutching the coin.

The White House said in a statement that those discussions included “efforts to rally global support for vaccinating the developing world against COVID-19” and Biden thanking the Vatican for its “leadership in fighting the climate crisis” and for “speaking out on behalf of the wrongfully detained, including in Venezuela and Cuba.”

“The leaders committed to continue using their voices to advocate for personal and religious freedoms worldwide,” the White House said. 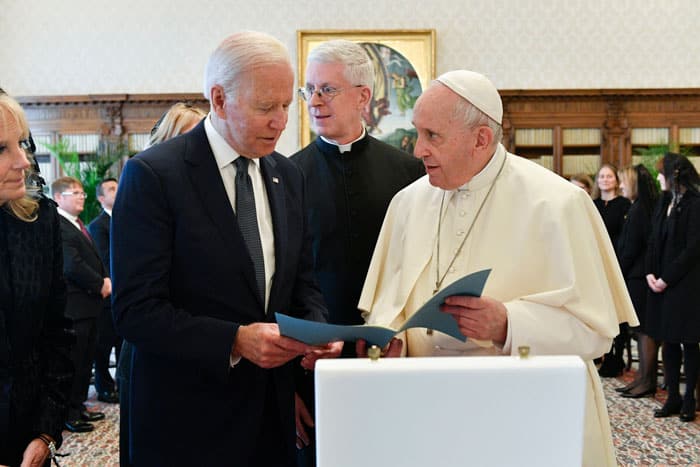 The Vatican had unexpectedly canceled — about 24 hours before Biden’s arrival — a scheduled livestream of the visit to the objections of reporters. Accredited journalists covering the Vatican have not been present for the beginning and concluding portions of any meetings with heads of state in the papal library since late February 2020 because of the COVID-19 pandemic.

A group of reporters was given permission to be present for Biden’s arrival by car in the San Damaso Courtyard of the Apostolic Palace and a livestream was aired only of the presidential vehicle convoy arriving at the Vatican and stopping in the courtyard.

The only explanation the Vatican provided was that no livestreams of the pope’s meetings with heads of state have been provided since the pandemic began. However, as is customary, Vatican Media provided photographs and edited footage of some parts of the meeting.

Reaching the courtyard of the Apostolic Palace, where the U.S. flag had been raised and a formation of Swiss Guards stood watch, Biden and his wife were welcomed by Msgr. Leonardo Sapienza, regent of the papal household. Shaking his hand, Biden said, “It’s a pleasure to see you,” introduced his wife, and added that he was “glad to be here.”

“It’s good to be back,” he said, smiling, greeting and thanking each of the awaiting papal gentlemen who would accompany him upstairs.

“I’m Jill’s husband,” he told one member of the papal household, and, “If I had had your hair, I would have been elected much earlier,” he joked to another gentleman, blessed with a full head of salt-and-pepper-colored curls.

The monsignor then led them upstairs to the papal library before the live footage was cut off. 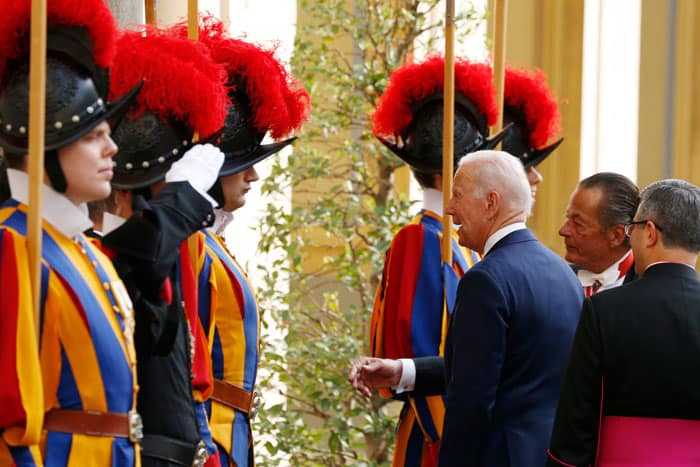 U.S. President Joe Biden turns toward Swiss Guards in the San Damaso Courtyard of the Apostolic Palace as he leaves after a meeting with Pope Francis at the Vatican Oct. 29, 2021. (CNS photo/Paul Haring)

The private papal audience was Biden’s first presidential visit to the Vatican. Pope Francis had previously met Biden three times when Biden was vice president; the previous time was in 2016, after they both spoke at a conference on adult stem-cell research at the Vatican.

Biden is now the 14th U.S. president to have met a pope at the Vatican and the second Catholic president after President John F. Kennedy met Pope Paul VI almost 60 years ago.

The White House had said in mid-October that Biden planned on discussing working together on efforts promoting the respect of basic human dignity, ending the COVID-19 pandemic, addressing the climate crisis, income inequality and migration, and caring for the poor.