The World Court has found prima facie evidence of violence against Rohingya by the junta, which could lead to a ruling of genocide.

The International Court of Justice (ICJ, also known as the World Court) will hold public hearings over the Rohingya genocide in February, starting with preliminary objections raised by Myanmar’s military junta.

The main judicial organ of the United Nations said in a press release last week that it will hold public hearings concerning the application of the Convention on the Prevention and Punishment of the Crime of Genocide in The Hague, Netherlands, from Feb. 21-28.

In January 2020, the ICJ had ordered Myanmar to carry out emergency provision measures and to respect the requirements of the 1948 Genocide Convention.

The court found there was prima facie evidence of breaches of the convention and ruled that the estimated 600,000 Rohingya remaining in Myanmar were “extremely vulnerable” to violence at the hands of the military.

The case was brought by the Gambia, a Muslim-majority African state that accused Myanmar of breaching the Genocide Convention.

The complaint is one of the first attempts to use the international justice system to help the estimated 740,000 Rohingya refugees who fled Myanmar following Myanmar’s military brutal crackdown in Rakhine state in 2017.

International pressure continues to mount on the military leaders including coup-leader Min Aung Hlaing to be tried at the ICC over rights abuses. 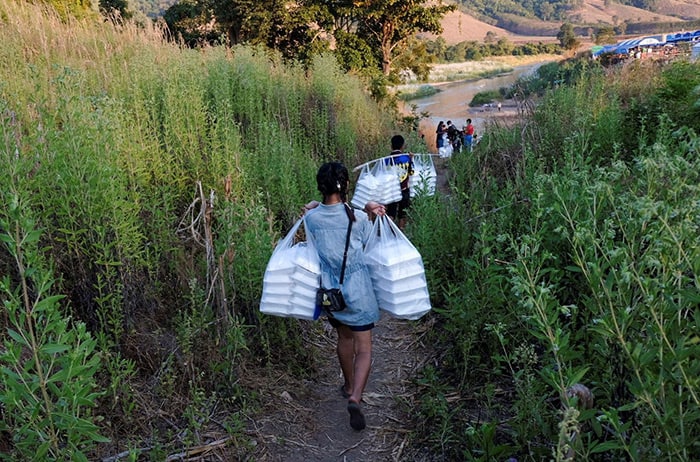 Refugees, who have fled a flare-up in fighting between the Myanmar army and insurgent groups and settled temporarily along the Moei River, receive aid from Thailand on the Thai-Myanmar border, in Mae Sot, Thailand, Jan. 4, 2022. (CNS photo/Reuters)

Myanmar’s then civilian leader Aung San Suu Kyi had led Myanmar’s delegation and defended the genocide case at The Hague by attending personally in December 2019.

Suu Kyi, who was deposed in a coup in February 2021 and sentenced to six years in detention, appealed to ICJ judges to dismiss allegations that Myanmar committed genocide and instead allow the country’s court martial system to deal with any human rights abuses.

The junta organized a new legal team led by its foreign minister in June 2021. However, it is yet to be announced who will go to The Hague for the upcoming court hearings.

A Reuters report said citing sources that the junta has been engaging with the court to submit court-ordered reports every six months on the situation with the Rohingya. The reports are not public.

Myanmar has been facing international pressure including from the International Criminal Court (ICC) and an Argentine court over atrocities against Rohingya Muslims in Rakhine.

A UN fact-finding mission reported that “genocidal acts” carried out in Rakhine by Myanmar’s military in 2017 resulted in more than 740,000 Rohingya fleeing to Bangladesh.

International pressure continues to mount on the military leaders including coup-leader Min Aung Hlaing to be tried at the ICC over rights abuses against peaceful protesters and civilians across the country.

More than 1,400 people including children have been killed and around 10,000 people are detained by the junta since the military coup.

In view of the Covid-19 pandemic, the hearings will have some members of the court attending the oral proceedings in person while others will participate remotely by video link.

Representatives of the parties to the case will participate either in person or by video link, the ICJ has said.

Featured image: A Rohingya woman and children after being rescued by Indonesia’s navy in the waters off Bireuen in Lhokseumawe, Aceh province, Indonesia, on Dec. 31, 2021. (Photo: AFP)