An international rights group has demanded that Malaysia and Thailand urgently rescue Rohingya refugees stranded at sea and provide them with assistance and access to asylum.

Malaysian authorities detained 269 Rohingya refugees who arrived on a damaged boat off Malaysia’s coast at Langkawi on June 8. A second boat with an estimated 300 Rohingya remains at sea near Thailand’s Koh Adang island, according to the Malaysian Maritime Enforcement Agency.

Human Rights Watch (HRW) said the boats left Bangladesh in February, meaning that the hundreds of Rohingya on board have been at sea for four months without access to adequate food and water.

On a previous boat bound for Malaysia that was rescued by the Bangladesh coast guard, as many as 100 might have died on board as a result of the deplorable conditions.

“Southeast Asian governments are callously passing the buck on protecting Rohingya refugees desperate for sanctuary and a future after Myanmar’s military drove them from their homes with mass atrocities,” said Brad Adams, Asia director at HRW.

“While Myanmar remains ultimately responsible for the Rohingya refugees’ plight, Malaysia and Thailand should stop wearing blinders about the immediate risks and suffering that they face at sea.” 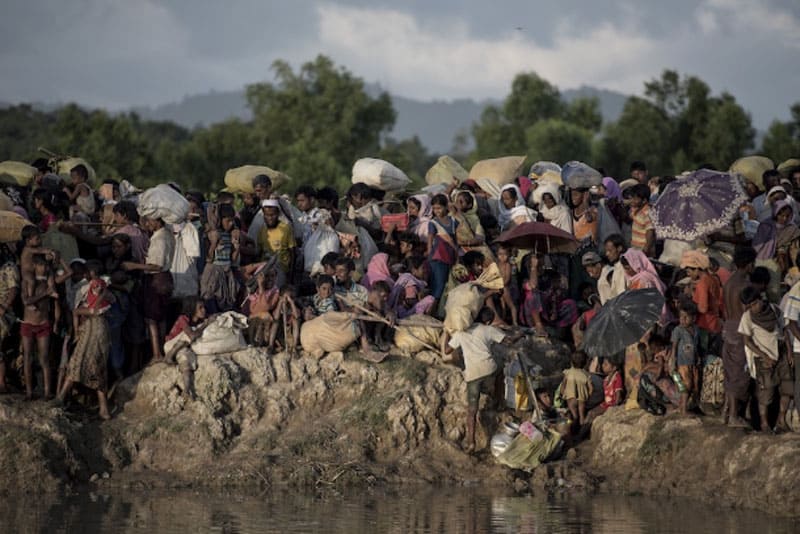 Rohingya refugees fleeing Myanmar arrive at the Naf River on the Bangladesh border on Oct. 10, 2017. In a final report released on Sept. 18, a U.N. probe says six members of Myanmar’s military including chief Min Aung Hlaing should be investigated for genocide. (Photo by Fred Dufour/AFP via UCAN)

Malaysian officials who intercepted the Rohingya boat on June 8 intended to return it to international waters but a damaged engine prevented the pushback. About 50 refugees jumped off the boat and swam ashore, where they were detained, while the boat with the remaining passengers was towed to Langkawi.

Only 70 percent of the detained Rohingya were able to walk when they arrived due to the harsh conditions and lack of food and water, according to the director-general of Malaysia’s maritime agency.

From January to March, numerous boats, each with hundreds of refugees, left overcrowded, flood-prone camps in Bangladesh’s Cox’s Bazar for Malaysia.

Over the past two months, Malaysian authorities have repeatedly turned away boats of asylum seekers attempting to land, leaving hundreds of Rohingya in life-threatening conditions at sea, contrary to international search and rescue obligations according to the rights group.

In May, UNHCR, the International Organization for Migration and the UN Office on Drugs and Crime said “deterring movements of people by endangering life is not only ineffective; it violates basic human rights, the law of the sea and the principles of customary international law by which all states are equally bound.” 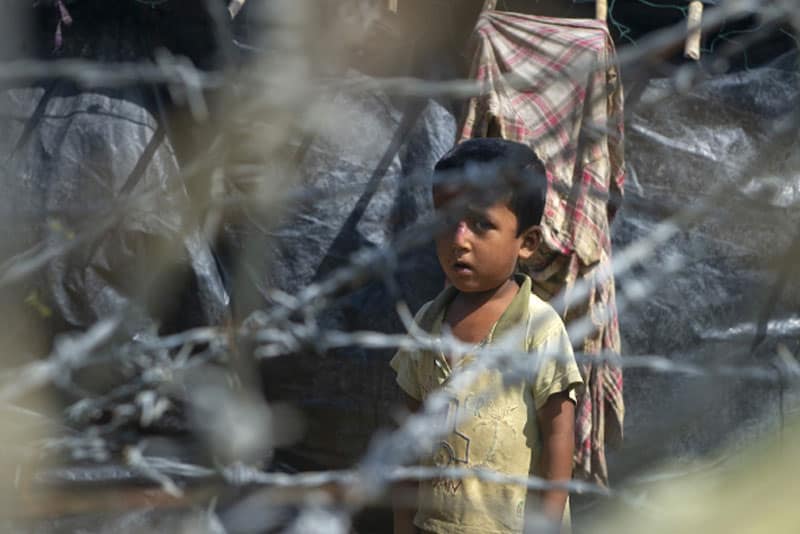 Rohingya refugees gather near a fence in “no man’s land” between Myanmar and Bangladesh as seen from Maungdaw, Rakhine State, on June 29. More than 700,000 Rohingya fled an army crackdown in August 2017 that the U.S. and U.N. have called ethnic cleansing. (Photo by Phyo Hein Kyaw/AFP via UCAN)

“We call on states in the region to uphold the commitment of the 2016 Bali Declaration as well as Asean pledges to protect the most vulnerable and to leave no one behind,” the groups stressed.

In February, the Task Force on Planning and Preparedness of the Bali Process on People Smuggling, Trafficking in Persons and Related Transnational Crime made a commitment to saving lives when responding to irregular maritime migration. Malaysia, Indonesia, Myanmar, Thailand and Bangladesh are all members.

HRW said responsibility for the security of the Rohingya rests primarily with the Myanmar government but extends to the countries where they seek refuge.

About 900,000 Rohingya are living in refugee camps in Bangladesh, most of whom fled Myanmar since August 2017 to escape the military’s bloody crackdown.

The estimated 600,000 Rohingya who remain in Rakhine state are subject to government persecution and violence, confined to camps and villages without freedom of movement, and cut off from access to adequate food, healthcare, education and livelihoods.

Tens of thousands of Rohingya have fled Rakhine and boarded overcrowded and unsafe boats for Malaysia, Indonesia and Thailand.

A crackdown on human trafficking in Thailand in 2015 triggered a humanitarian crisis when smugglers abandoned their human cargo on land and at sea.

Featured image: A Rohingya girl holds a baby at the Aung Mingalar segregation quarter for Rohingya Muslims as they observe the first day of the Eid al-Fitr holiday in Sittwe in Myanmar’s Rakhine state on May 20. (Photo: AFP via UCAN)