There’s much to be said about what each one of the blesseds means and represents as a missionary, a young and an older committed lay member, a prophet of the Catholic Church.

The best known of the four, and probably the most talked about, is Father Rutilio.

St. John of the Cross said the beloved has a certain way of transforming into the lover, and I believe something similar happens with friends. In a relationship between two bosom friends, they end up imitating the values each admires about the other.

St. Oscar Romero, who was assassinated in 1980, died for justice and his social compromise with the poor. His closeness with Father Rutilio, who was working for the same goals, has been closely documented, with many attributing St. Romero’s compromise to Father Rutilio’s martyrdom in 1977. But I argue that they were disciples of one another.

As St. Romero demanded justice at the national level, Father Rutilio demanded justice for the less visible rural poor, even as he faced great personal challenges. Like many Salvadorans, Father Rutilio suffered psychological wounds. Some arose from his background as a child who struggled in rural poverty as well as challenges in his family life. But he was able to overcome his afflictions and sought help. With the grace and mercy of God, he improved and went on to seek a better way of life — not for himself but for the farmers, agricultural workers, child laborers and the poor in his beloved rural flock.

In speaking up for what was owed them as children of God, a life of dignity, livable wages, food, education, the right to assemble to practice their faith, he met death on the way to a novena March 12, 1977. Accompanied by his two companions in martyrdom, a boy in his teens and a sacristan in his 70s, he died after being shot more than a dozen times by those who believed he spread a dangerous message.

Franciscan Father Cosme Spessotto could have lived out a much happier and more comfortable life at any convent in his native Italy. But from there, he came to El Salvador in the 1950s to live in poverty among the Nonualcos, an indigenous people whose past had included state-sponsored extermination of their ancestors in 1932. Bringing in some traditions from his native home, he rode the dusty roads around San Juan Nonualco, carrying the Gospel throughout the region in a Vespa and teaching the local Salvadorans to cultivate grapes for wine production. 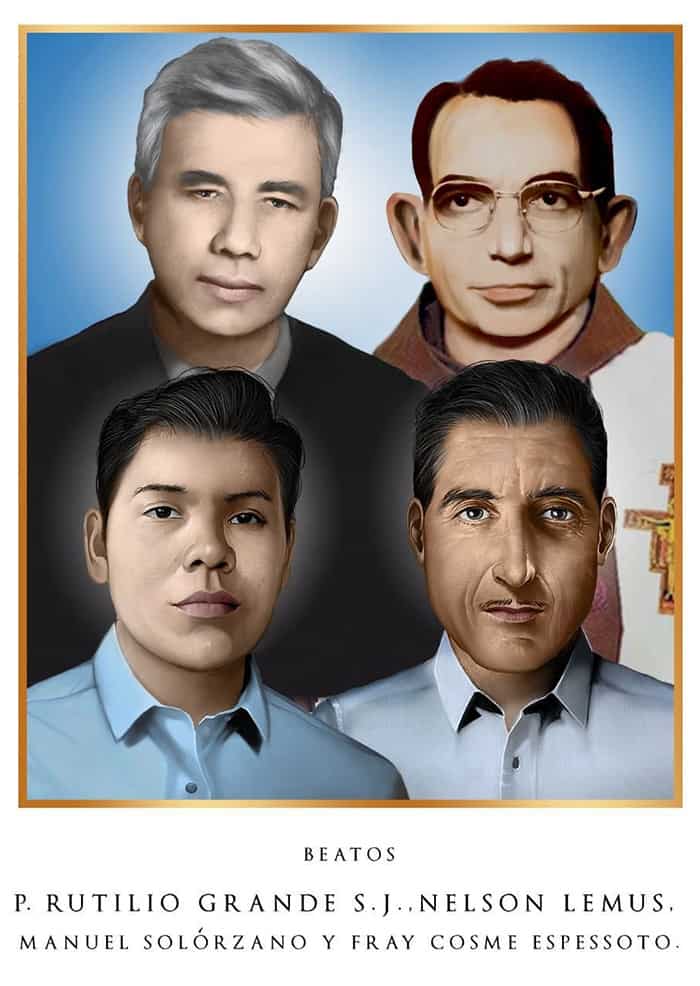 Salvadorans who knew him speak of how a few struggled to understand his Spanish at the beginning, but he made up for it with the language of Christ, using tenderness, inviting the poorest among them in for food, a cup of coffee, and listening to their problems. When war drums began beating in El Salvador in the 1970s, he stopped the military from taking over a church in the region and ordered them to free priests they had detained, telling them Jesus was inside and watching what they were doing.

He pastored to parents who had sons and daughters disappear and spoke in defense of catechists who never returned, not from spreading political propaganda, as they were accused, but who were carrying the word of God to remote locations in El Salvador. When Father Rutilio was martyred, Cosme spoke against his killing and stepped up his denunciations of what the military was doing to civilians.

As death threats against him increased, he penned an undated letter, forgiving his murderers in case he were harmed and thanked his parishioners for their prayers, for their love, ending his message with: “I hope to keep helping you from heaven.”

I’ve been impressed with the offertory of his life away from his native home, and his forgiveness ahead of being shot in the head in June 1980 as he prepared for Mass–the price he paid for his simple mission of evangelization.

Cosme was one of many martyrs from a time when El Salvador became a stage for Catholic martyrs, including many who came from far. Some include the Jesuit priests, most of them from Spain, who were dragged from their residence at a university in San Salvador and were murdered on the campus in 1989. They also include two women religious buried in a cemetery in my diocese, Maryknoll Sisters Ita Ford and Maura Clarke, who along with Ursuline Sister Dorothy Kazel and lay missionary Jean Donovan on Dec. 2, 1980, became part of the roster of more than 70,000 innocent victims the war produced.

With our lay brothers, Nelson and Manuel, the church is recognizing an important sacrifice by the laity. They were said to accompany Father Rutilio everywhere he went. Without giving a thought to the danger that constantly surrounded their pastor, they made the decision to stay with him. These now-recognized lay martyrs represent all the catechists, young like Nelson and older like Manuel, ministers that our church sacrificed during the war in the 1970s and 1980s, a time of bloody persecution against a church that opted to be on the side of the poor.

It’s a church that those who still refuse to accept the Second Vatican Council still do not embrace. It’s one that led to the killing of these martyrs out of the hatred of our faith and one that still faces the problem that, in a time when the country was predominantly Catholic, they were likely martyred, as some here have argued, at the hands a fellow baptized Catholic.

Bishop Escobar, a Discalced Carmelite, is head of the Diocese of Chalatenango, El Salvador, and has written a book about St. Oscar Romero and his pastoral experience in Chalatenango.