Web-Only Reflection:
A Maryknoll lay missioner holds on to hope after the assassination of Haiti’s president, with the country under a “state of siege.”

“Where were you when … ?” is a question typically asked regarding moments that continue to impact people long after the fact. Being in Haiti during the past couple of years has left me with no shortage of such moments. My head is left spinning in the most recent event, which occurred just as my work time in Haiti is coming to an end.

In the early morning hours of July 7, President Jovenel Moïse was assassinated and First Lady Martine was shot in their home. The first lady was transported to the United States to receive medical treatment. A state of siege has been declared and, as a result, all planes are grounded and flights are postponed. The country has entered into a chaotic lock down of sorts, with several outbreaks of conflicts. Roads to many cities are blocked. Port-au-Prince, the capital, is more intense than it ever has been since my arrival in January 2019.

Some mourn the loss of the president. Some do not consider it a loss at all. Some are just trying to secure their safety to make it to tomorrow. And all of us are left holding a breath heavy with uncertainty for what comes next. As we’ve learned over the past couple of years, there is a high chance of things getting uglier before any healing is allowed to occur.

For many of us expats on the ground, bearing witness to a country in the wake of presidential assassination is unprecedented. It is still too new a situation to have the proper scope in terms of processing it all. In some regards, we have little choice but to go with it. I was scheduled to be on a plane returning home this weekend, but to be frank, it is unlikely the situation will be resolved by then. It, like so many other times here, is completely out of my hands.

I know that I am considerably privileged that the biggest impact of this event is that I may have to change my flight plans. It is in that perspective that I can breathe through these moments, keep my loved ones informed, and hold onto hope with my Haitian community here.

The government has issued an official statement placing a “state of siege” order on the country for 15 days. However, Haiti does not have a legitimate army presence, only a police force with different branches. It is therefore uncertain how the order can be carried out.

There is also ambiguity around who can or should be heading the country as the interim leader. There is interim Prime Minister Claude Joseph, but he was never duly installed by Moïse. As an alternative, the head of the Supreme Court could have taken over and run elections in a few months, but he died due to COVID-19 recently. Moïse fired many of the government members who could have made moves to decide the next course of action. Essentially, while the few who remain in offices have called for the state of siege, there is little in place to enable them to effectively carry it out. 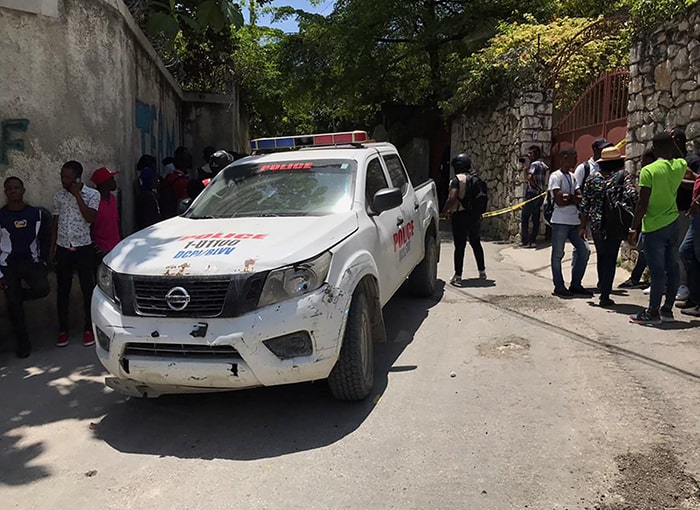 People stand next to a police car and a yellow police cordon near the residence of Haitian President Jovenel Moïse near Port-au-Prince July 7, 2021. The president was assassinated in an early morning attack at his home, the prime minister said. The first lady was also shot in the attack; her condition was not immediately clear. (CNS photo/Estailove St-Val, Reuters)

This has increased the stress of some people currently seeking refuge in response to the state of siege order. Human rights activists as well as other public figures who have spoken out against Moïse or his policies fear the order will allow the government unchecked power to search any home or institution without a warrant. In the most extreme scenario, they fear for their lives. With roads blocked, and the Dominican Republic not currently an option, many people involved in the heat of politics in Port-au-Prince are in a dangerous position should the government follow through on the warrantless searches.

The assassination comes at a critical time for Haiti, as COVID-19 cases are on a near catastrophic rise. The lack of vaccine availability is appalling. A World Health Organization official recently called Haiti an extreme example of the “stark inequities on vaccine access.”

The problems currently facing Haiti are not limited to Port-au-Prince or due to the state of siege. People in outlying communities and in the countryside are facing just as many threats; they just come in the form of illness and hunger. Market prices are steadily on the rise, while the value of the country’s currency, the gourde, continues to fall. Ongoing road blocks in various places makes it difficult to have a steady flow of trade goods and necessary products that promote sustainability to various regions. It is a critical time for the country, and viable solutions need to be worked toward for a sustainable future.

I expect little less than chaos in the coming weeks for Haiti, and that concerns me for the people I love here. It is a 180 from how I would like to leave this beloved island. I cannot tell you what all comes next. I hope with everything I have and am that I am proven wrong, that a peaceful resolution comes swiftly, that those I love here can move into a future of peace and security, and that these dark days of siege do not extend into the coming weeks. I hope for this, but I cannot assure anyone of it.

I will encourage people not to lose hope. Haiti has weathered many political hardships, unstable ground, and internal conflict. In this most recent storm, we do what we can to remain grounded in each other and remain determined to seek out brighter days. For now, it is taking it step by step and doing what we can to look out for one another. Remembering each other’s sacredness as humans is paramount to working through this. To look, not with pity, but with love to the other.

I ask that you uplift Haiti and her people in your thoughts and prayers. We pray for peace, we pray for healing, we pray for a tomorrow full of light for the people of Haiti. We pray for those who lost a father, child, brother to violence and their grief. To all of you, please continue to stay safe, be kind, and know you are loved. As we are able, we will keep our communities apprised of the situation as it develops.

A version of this story was originally published on the Maryknoll Lay Missioners’ website.

Featured image: People walk past a wall with a mural depicting Haitian President Jovenel Moïse in Port-au-Prince July 7, 2021. Moïse was assassinated in an attack in the early hours of July 7 at his home outside of the capital, Port-au-Prince, the prime minister said. (CNS photo/Robenson Sanon, Reuters)

Abby Belt is a Maryknoll lay missioner who serves in two ministries in Gros Morne, Haiti—providing continuing education to teachers at Jesus-Mary School and assisting with a scholarship and empowerment program for young women at Mercy Beyond Borders.