CELAM wants Church that heeds the cry of the poor and excluded, with greater roles for women, young people and laypeople.

LIMA, Peru (CNS) — The church in Latin America and the Caribbean is called to be a missionary church that heeds the cry of the poor and excluded; a synodal church where women, young people and laypeople have greater roles; and a church that is evangelized even as it evangelizes, according to the final document of the church’s First Ecclesial Assembly held a year ago in Mexico.

The document of reflections and pastoral challenges resulting from the assembly was released by leaders of the Latin American bishops’ council, CELAM, Oct. 31 during a news conference at the Vatican. The conference was livestreamed on various platforms.

The publication reflects a desire for a church that “goes out to the periphery … a Samaritan church … a church that builds fraternity, which is grounded in love, in the encounter with those who suffer most,” Archbishop José Luis Azuaje of Maracaibo, Venezuela, president of Caritas in Latin America and the Caribbean, said in a video message at the presentation.

The document is the fruit of a monthslong process that included a “listening” period from April to August 2021, during which some 70,000 people throughout the region provided input, followed by the weeklong assembly Nov. 21-28.

That process, which echoed the methodology used for the Synod of Bishops for the Amazon in October 2019, made the ecclesial assembly “a practical laboratory” for the Synod of Bishops on synodality, which began with listening sessions this year, to be followed by meetings in Rome in 2023 and 2024, said Archbishop Miguel Cabrejos of Trujillo, Peru, CELAM president.

Published in English, Spanish, Portuguese, Italian and German, with a French version also promised, the document is meant not only as a summary, but as a guide for action in the coming years, said Cardinal Leopoldo José Brenes of Managua, Nicaragua, and CELAM’s second vice president.

“This isn’t just another document,” he said, adding that the reflections and proposals “are something much more dynamic … which will give a new impetus to our pastoral work.”

The document, titled “Toward a Synodal Church Going Forth into the Periphery,” begins by summarizing “signs of the times” in the region, including the COVID-19 pandemic — which meant that only about 100 participants attended the assembly in person, while another 1,104 participated online.

These signs of the times, based on input from the listening sessions, include social and economic inequalities exacerbated by the pandemic; government corruption and the fragility of the region’s democracies; ravaging of the environment, especially in the Amazon; massive migration; the growth of cities; and an expansion of both Pentecostal churches and secularism.

Issues within the church that were mentioned during the listening process and in the assembly included the need to “overcome clericalism,” a call for transparency in handling cases of abuse, better formation for priests and religious, and opportunities for more formation of and participation by laypeople, including women, young people, Indigenous people and those of African descent.

Men and women religious in the region “are embracing our identity as disciples and missionaries, and we understand that it is necessary that we be converted,” Sister Liliana Franco Echeverri of the Company of Mary Our Lady, president of the Latin American and Caribbean Conference of Religious, said in a video message. 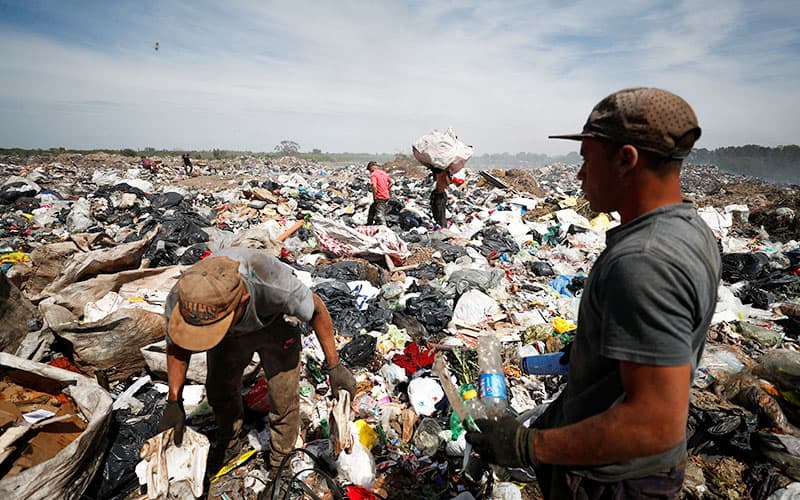 Waste recyclers look through heaps of waste for cardboard, plastic and metal, at a landfill in Buenos Aires, Argentina, Oct. 5, 2022. The recyclers work 12-hours shifts as Argentina faces one of the world’s highest inflation rates, set to top 100% this year. Among the challenges identified during the process of the Latin American church’s First Ecclesial Assembly were social and economic inequalities exacerbated by the pandemic. (CNS photo/Agustin Marcarian, Reuters)

“We all need formation to be better witnesses and to prioritize formation in synodality so as to overcome the many and very diverse forms of clericalism,” she added. “In contexts as complex as those of our world, we are called to be a sign, to be an expression of a way of being and of values that definitely must be countercultural and eloquent.”

Participants in the 2021 Ecclesial Assembly also called for a greater role for young people, a plea echoed by Paola Balanza, a Bolivian youth ministry leader, in a video message at the news conference.

Young people, with their creativity and enthusiasm, “can make a great contribution to the church. But we need to be in spaces where decisions are made, where we are taken into account, and where our voice is heard,” Balanza said. “It is important that we realize that we are the work of God, we are the holy ground, we not only are the future, we also are the present.”

She urged the region’s church leaders not to leave the post-assembly document on the shelf, but to take action to implement it.

The document ends with dozens of “lines of action” for addressing the challenges raised in the “signs of the times” section. When the CELAM leaders were asked at the news conference about how those actions would be implemented, the response was generally that the specific steps would be up to each bishops’ conference.

To some extent, that leaves the Ecclesial Assembly document in the same situation as the document that ended the Fifth General Conference of Bishops of Latin America and the Caribbean in Aparecida, Brazil, in 2007. That gathering ended with a call for a “great continental mission” to reach out to Catholics who had left the church and invite others to join.

While individual jurisdictions may have made efforts, however, no regionwide plan was ever developed.

It was for that reason that when the Latin American bishops proposed a sixth general conference to mark the 15th anniversary of Aparecida, Pope Francis — who as Cardinal Jorge Bergoglio of Argentina led the commission that drafted the Aparecida document — instead asked them to find a way to implement conclusions from Aparecida that remained pending. That request led to the listening process and the Ecclesial Assembly.

But although there is not a specific plan, the document does list the action areas for each challenge. The bishops at the news conference also agreed on the need to implement the guidelines from the Ecclesial Assembly, some of which are also serving as input for the synod on synodality.

With their skill in using technology for networking, young people can play a key role in continuing the process, said Cardinal Odilo Pedro Scherer of São Paulo, first vice president of CELAM. During the Ecclesial Assembly, he said, young participants took advantage of social networks to quickly form discussion groups with members from as many as 20 countries.

The document is part of a process that began with discernment, continued through the assembly and does not end with publication of the conclusions, Archbishop Cabrejos said. “It’s like a door that opens, but that is not going to close.”

Emphasizing the participation of laypeople, including women and young people, he added, “This was the outcome of a dialogue of the people of God.”

Featured image: Carla Marquez, 36, who is six months pregnant, burns wood on the street to cook a meal for her husband, Carlos Henrique Mendes, 25, and their daughter, Gabriela, 5, outside their home in São Paulo Sept. 16, 2022. Marquez and her family live in a room paid for by a church and struggle to feed their daughter. Among the challenges identified during the process of the Latin American church’s First Ecclesial Assembly were social and economic inequalities exacerbated by the pandemic. (CNS photo/Amanda Perobelli, Reuters)