MEXICO CITY (CNS) — Nearly 1,000 church leaders — lay and religious — from Latin America and the Caribbean called for a more inclusive and synodal church, one that pays attention to people’s realities, opens increased roles for women and excluded groups, combats clericalism and continues taking the Gospel to the peripheries of society.

Although bishops from the region had met in historic meetings five previous times, the Nov. 21-28 Ecclesial Assembly of Latin America and the Caribbean was the first such meeting to include laity. The assembly drew approximately 100 in-person participants to Mexico City, but also included participation by another 900 people who tuned in virtually.

“It was a space for participation, a lot of diversity and a lot of listening … which is a novelty,” said Consolata Father Venanzio Mwangi Munyiri, coordinator of the Afro-Colombian ministry of the Archdiocese of Cali, Colombia. “Listening to the cries of each person, of the experiences, enriches the vision of the church on the continent and naturally also challenges the way we evangelize.”

Participants in the ecclesial assembly said no final document signed by bishops would be released — a reflection of the nature of the assembly.

Cardinal Marc Ouellet, president of the Pontifical Commission for Latin America, told participants, “Pope Francis is not interested in a new church model. … He does not expect a new pastoral program from this ecclesial assembly, but he does expect a new and strong push toward the continental mission, which we know is unfinished.”

Cardinal Ouellet, who also heads the Congregation for Bishops, said in his homily at the closing Mass at the Basilica of Our Lady of Guadalupe that assembly participants must “become aware of their missionary identity.” 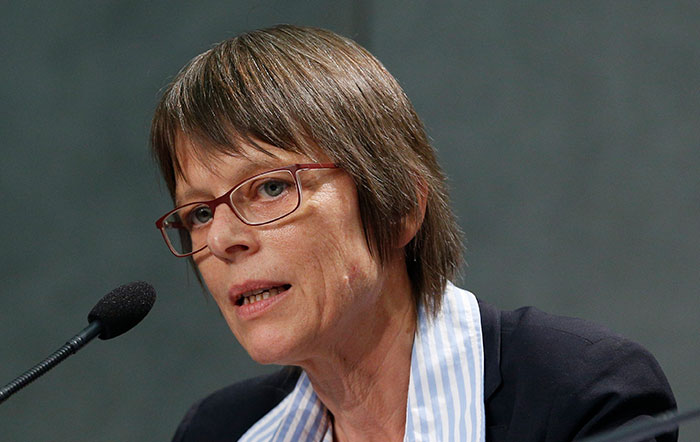 Sister Birgit Weiler, a member of the Medical Mission Sisters who works in the Peruvian Amazon, speaks at a news conference after a session of the Synod of Bishops for the Amazon at the Vatican Oct. 11, 2019. During the Nov. 21-28 Ecclesial Assembly of Latin America and the Caribbean in Mexico City, sister Weiler said religious and laity can also feed clericalism. (CNS photo/Paul Haring)

The identity was detailed in the assembly’s final document, “We are all missionary disciples going forth,” from all participants, not just bishops. It described a “church going forth” from the parishes to the peripheries — a vision outlined by then-Cardinal Jorge Mario Bergoglio (now Pope Francis) in the document he edited at the Latin American bishops’ fifth general conference in Aparecida, Brazil, in 2007.

This assembly’s final document, released Nov. 27, embraced the call, saying, “We reaffirm in this ecclesial assembly that the path for experiencing the pastoral conversion discerned in Aparecida is that of synodality.”

That synodality, or listening, must occur within the church itself, participants said, along with a need to address the role of women and impact of clericalism.

“There was talk of the need for a transformation in the way of living out our relationships within the church, moving from clerical relationships to more synodal relationships,” said Sister Liliana Franco, a member of the Sisters of the Company of Mary and president of the Latin American Confederation of Religious.

The recurring issue of clericalism also emerged as an issue to be addressed by Catholics in Latin America. 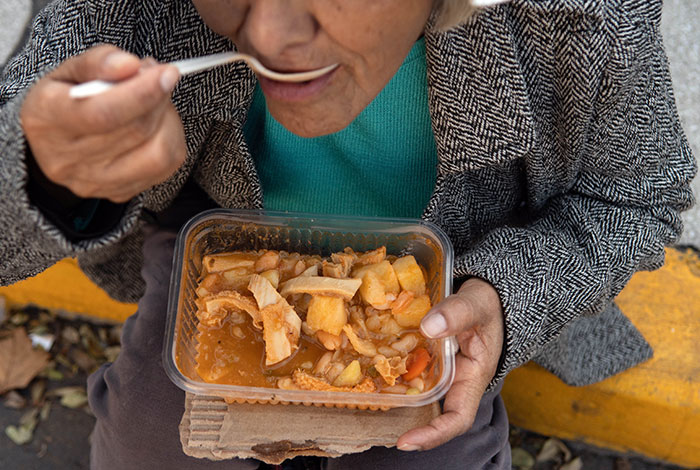 A person enjoys a free meal on a street in Buenos Aires, Argentina, June 15, 2020. The Ecclesial Assembly of Latin America and the Caribbean ended with a call for synodality and to continue taking the Gospel to the peripheries of society. (CNS photo/Carlos Brigo, Latin America News Agency via Reuters)

“Clericalism is, at its root, an abuse of power, and not only is it fed by priests and bishops, but also the laity and religious,” said Sister Birgit Weiler, a member of the Medical Mission Sisters who works in the Peruvian Amazon. It has “cultural roots,” Sister Weiler said, adding it is often “mutually supported” by machismo in Latin America, but overcome by people treating each other as “brothers and sisters in conditions of dignity, appreciating our gifts and charisms.”

The final document noted, “The outcry of those who suffer because of clericalism and authoritarianism in relationships, which leads to the exclusion of the laity, especially women in the process of discernment and decision-making on the mission of the Church, constitutes a great obstacle to synodality.”

“This is not going to mark a pastoral plan. This simply is the expression of the people,” said Emilce Cuda, an Argentine theologian and head of office of the Pontifical Commission for Latin America. “There is no new pastoral plan. The current pastoral plan continues being Aparecida.”

In the final document, the participants said, “This assembly is a kairos, a propitious time for listening and discernment that connects us in a renewed way with the pastoral orientations of Aparecida and the magisterium of Pope Francis, and encourages us to open new missionary paths toward the geographical and existential peripheries.”

The document continued: “The church is, in itself, synodal. Synodality belongs to its essence. Hence, it’s not a passing fad or an empty slogan. With synodality we are learning to walk together as a church, as the people of God, involving everyone without exclusion in the task of communicating the Gospel with joy — as missionary disciples going forth.”

Featured image: Pope Francis greets Emilce Cuda, an Argentine theologian and head of office of the Pontifical Commission for Latin America, at the Vatican March 17, 2017. Cuda, a participant at the Nov. 21-28 Ecclesial Assembly of Latin America and the Caribbean in Mexico City, said the meeting did not issue a new pastoral plan for the region, but will continue evangelization efforts outlined in the 2007 Aparecida document. (CNS photo/Vatican Media)