MAE SAM LAEP, Thailand (CNS) — Pah Kler climbs onto a boat laden with bags of rice and disappears around a bend in the Salween River, on his way to deliver lifesaving aid to families hiding in the jungle in Myanmar.

A Catholic catechist, Kler coordinates cross-border aid to 43 separate groups of people displaced by the brutal violence that followed a 2021 military coup in Myanmar.

“People began showing up near my village at the beginning of the year, and new families continue to arrive. They can’t go back to their villages because they’re afraid of airstrikes by the military,” Kler told Catholic News Service.

“They’re in bad shape. When they left home in a hurry, they couldn’t carry anything. They look for root crops in the jungle that they can boil. They’ve gotten some help from other villagers, but this is the time of year between crops when there’s no excess food. When we get this rice to them, they’ll boil it with forest greens and bamboo shoots. It will keep them alive for a while.”

More than 1.3 million people remain displaced across the country; more than 1 million of them have been displaced since the 2021 military takeover, according to an Oct. 1 report from the U.N. Office for the Coordination of Humanitarian Affairs.

Over 14 million people — roughly one-quarter of the country’s population — need humanitarian assistance, according to the World Food Program. Yet the military continues to restrict or outright block their access to aid, so getting food and other supplies to the needy is challenging.

Kler works closely with officials from Thailand’s Diocese of Chiang Mai. With support from Maryknoll — the Catholic Foreign Mission Society of America — diocesan officials purchase food, medicines and shelter materials and transport them to where the Salween River forms the international border.

There, Kler and other volunteers from Myanmar’s Diocese of Hpa-an take over, transporting the material along the river to a point where it can be offloaded. The rice is then transported on the backs of volunteers, who walk circuitous forest paths that take them far from military checkpoints along the roads. Some routes take up to two-and-a-half days, Kler said.

During one recent trip, he and other volunteers carried in one month’s supply of rice to 429 families living in one displaced settlement.

While food — particularly rice — remains the priority, the Catholic supply chain also brings in medicines; Kler said malaria, diarrhea and malnutrition are commonplace among the displaced.

“I do this because I witnessed the suffering of the people. When faced with the sick and hungry, as a catechist my role is to make church teaching real in the lives of the people,” he said. “And I am the one who knows the people on the Thai side, so I try to be the bridge between the churches on each side of the border.” 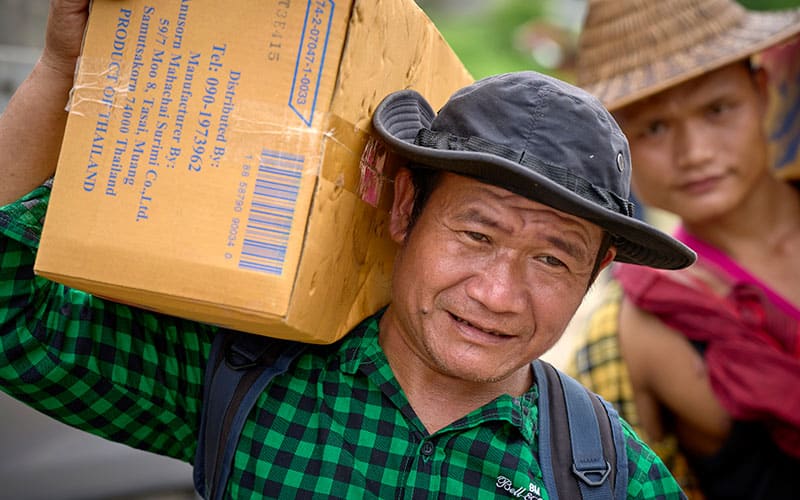 Pah Kler, a Burmese Catholic catechist who supervises the movement of food and other humanitarian supplies to internally displaced families hiding in the forests of Myanmar, loads food on a boat in Mae Sam Laep, a Thai village on the Salween River, which marks the border between Thailand and Myanmar, Sept. 29, 2022. Boats are loaded here with food and other humanitarian supplies, the first stage of transporting the material to communities of displaced people within Myanmar. (CNS photo/Paul Jeffrey)

Father John Barth, a Maryknoll missionary from Buffalo, New York, who works with the aid operation, said poor Myanmar residents carrying food through the jungle to their suffering neighbors is an image of the church at its best.

“The catechists and other volunteers are amazing. They take tremendous risks simply to feed hungry people. If we can provide the food, they’ll get it where it needs to be,” he said.

“I grew up hearing the stories of the saints, and these people are as close as I’ve come to meeting real saints. They are heroes.”

Father Barth said the church is in a unique position to aid the displaced in a political environment where other humanitarian agencies are not welcome.

“Thais are in general very hospitable, but the Thai military walks a tightrope. They’re pressured by the U.S. and other countries to crack down on Myanmar. Yet Thailand doesn’t want to piss off the Burmese,” he said, using the alternative name for people of Myanmar. “The last time they went to war, the Burmese kicked ass. So the Thais don’t want to antagonize them by allowing a highly visible humanitarian operation.”

Father Barth said because the church-run operation relies on clergy and laypeople already on the ground, it is both efficient and low-profile.

Yet church workers express frustration that they can’t reach more people. Their operations are largely limited to communities that can be reached on foot from the border.

“People are starving. In the past year, with so many people on the run, farmers haven’t been able to plant. And U.N. agencies and NGOs are not allowed to help them,” said a church worker involved in getting assistance to settlements of displaced Myanmarese near the border. He asked not to be named for security reasons. He fled Myanmar earlier this year after the killing of several coworkers, yet his family remains.

He says the Myanmar military government has criminalized the provision of food to the hungry.

“Helping anyone is against their rules. Even if you are just bringing a bag of rice or some medicines, they can arrest you and do anything to you. And the Thai military is very close to the Myanmar military. If they arrest me in Thailand and deport me back to Myanmar, then I am dead,” he said.

In a few border areas, he said, they’ve been able to get supplies past military checkpoints because Myanmar soldiers sympathetically looked the other way. In other cases, he said, the poorly supplied soldiers can be bribed with food. Yet such collaboration is unusual and can change with deadly consequences, without warning.

Despite the risks, the church worker continues helping the displaced.

“There are a lot of people we can’t reach with food, but they contact me. They’re on the brink of starvation,” he said.

“The World Food Program has so many rules and regulations about who they can help, and they can only go where the Myanmar military lets them,” he said. But many displaced people “are in hidden areas, and when the military finds them it forces them to return home.”

The man said Myanmar does not want the world to see displaced people or refugees. “For them, the people who oppose the regime are terrorists, not refugees.”

Featured image: Pah Kler, a Burmese Catholic catechist who supervises the movement of food and other humanitarian supplies to internally displaced families hiding in the forests of Myanmar, rides in a boat loaded with bags of rice in Mae Sam Laep, a Thai village on the Salween River, which marks the border between Thailand and Myanmar, Sept. 29, 2022. Boats are loaded here with food and other humanitarian supplies, the first stage of transporting the material to communities of displaced people within Myanmar. (CNS photo/Paul Jeffrey)