Human rights groups report that Haiti is paralyzed by violence perpetrated by criminal gangs, including extreme acts of aggression against women.

PORT-AU-PRINCE, Haiti (CNS) — The profound political and humanitarian crisis in Haiti has had a disproportionate impact on women and girls, say organizations representing refugees, female merchants, women, as well as the United Nations and the human rights sector.

“The deterioration of the sociopolitical situation, the proliferation of armed gangs, and the multiple crises affecting the country are exposing girls to constant risks of ill-treatment,” said the Support Group for Refugees and Repatriated Haitians, known by its French acronym GARR, in a statement to mark International Girls’ Day in mid-October. GARR specializes in documenting and advocating for the rights of Haitian migrant workers regularly expelled from the neighboring Dominican Republic.

Between May and September 2022, the support group documented 800 lone, undocumented girls cast out of the Dominican Republic. These girls are “at the mercy of mafia networks; they face human trafficking, sexual abuse and domestic slavery,” carried out not only by civilians but also by Dominican soldiers and border officials.

GARR cited a local partner organization in Belladere, on Haiti’s Central Plateau: It said of 47 girls between 5 and 17 that it received at its shelter, three had been raped and 12 others subjected to sexual abuse.

Even at the best of times in Haiti, being a woman is not easy. In 2020, the Spotlight Initiative on violence against women, a joint U.N. and Haitian government project, found that 12% of Haitian women have at some time been victims of rape or sexual violence, and that a quarter of women in this category are girls between 15 and 17 years old. Rape was only recognized as a crime in 2005 after a long struggle by the women’s movement. Women also have fewer job opportunities and less access to education than men, particularly in rural areas.

But in the current context, women are facing an even more acute situation. Armed gangs are terrorizing poor areas of Port-au-Prince, and cholera has made its way back to the Caribbean nation as the gangs have blocked access to the main fuel terminal, preventing hospitals and water purification plants from operating normally. 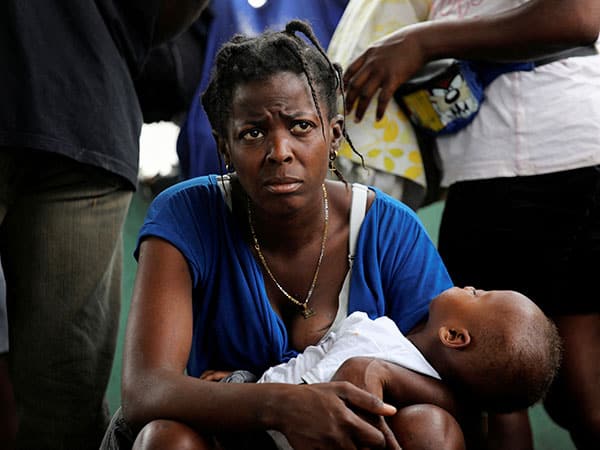 A woman holds a baby in her arms in a school that serves as a shelter in Tabarre, Haiti, May 14, 2022, after two weeks of turf wars between rival gangs forced residents to flee their homes. (CNS photo/Ralph Tedy Erol, Reuters)

But it is not only the poor women who are disproportionately affected by gang activities. The Madan Sara, enterprising ambulant tradeswomen who are the backbone of the informal Haitian economy, have seen their livelihoods crumble because of gang violence. These women, who normally travel between rural areas and cities to resell the agricultural produce that feeds city dwellers, have lost valuable sales and, in the country’s current lawless state, are vulnerable to bandits and rapists.

“Because it is so difficult to find gas, we often have to wait two or three days, sometimes a week, to get a bus to Port-au-Prince,” Venise, a Madan Sara in the southwestern city of Jérémie, told the Nouvelliste newspaper Sept. 30. “We often see our produce rot or have to resell it at ridiculously low prices.”

Pope Francis, meeting Jesuits from Canada in Quebec July 29, said priest friends were constantly updating him on the situation in Haiti, which he called critical.

Responding to a question from a Haitian Jesuit — Haiti is part of the Canadian Jesuit province — Pope Francis said Haiti “is going through an ordeal, as if it cannot find the right way forward. It does not seem to me that the international organizations have understood what to do.”

“I fear that it is falling into a pit of despair. How can we help Haiti to grow in hope? If there is one thing we can do as church it is certainly prayer, penance … But we must ask ourselves how we can help.”

In a highly controversial move, the Haitian government, led by Prime Minister Ariel Henry, has asked the international community to send a military intervention force to break the gangs’ blockade of the Varreux fuel terminal, allow clean water to circulate and hospitals to operate. But many Haitians are vehemently opposed to such an intervention, which for some women’s organizations brings back bad memories.

“Today, the feminist movement is still fighting against the atrocities of foreign troops who have occupied Haiti for the last 30 years, mainly MINUSTAH rapes of minors and women, children conceived and abandoned by U.N. soldiers, cholera, repression and massacres of members of the most vulnerable communities and multiple human rights violations,” said a coalition of seven Haitian women’s organizations in an Oct. 18 statement. MINUSTAH was the U.N. peacekeeping force in Haiti from 2004 to 2017.

The groups said the women’s movement was formed in Haiti to protest rapes and sexual crimes of U.S. Marines during the U.S. occupation of Haiti, 1915-34.

The arrival of more troops in Haiti, the women’s groups said, would be “to once again permit an armed force to operate without accountability and carry out reprehensible acts of all kinds under the cover of immunity.”

Featured image: A soldier positions himself outside the military base near the presidential palace in Port-au-Prince, Haiti, July 27, 2022, after gangs waged intense gun battles, shuttering main avenues and a municipal market in the downtown area of the capital. (CNS photo/Ralph Tedy Erol, Reuters)