Citing the reign of terror of armed gangs in Haiti, religious leaders ask for direct intervention from the international community.

PORT-AU-PRINCE, Haiti (CNS) — Religious orders working in Haiti have called on the international community to directly intervene to address the reign of terror of armed gangs in the country, which they described as “diabolical, frightening and unacceptable.”

The same gangs are responsible for nearly four kidnappings a day in 2022 and violence that killed more than 200 and forced 3,000 to flee their homes during July alone.

In an Aug. 4 open letter to Najat Maalla M’jid, U.N. special rapporteur on violence against children, the Justice Coalition of Religious — made up of 20 religious orders — urged the international community “to respond swiftly and effectively to the atrocities occurring in Haiti.”

In a document of testimonies published by the coalition, Passionist Father Rick Frechette, a doctor in Port-au-Prince, said “99% of people on the street want a foreign military force to save them.” He described the situation on the streets of Port-au-Prince as “Somalia-type battles.”

The coalition letter noted that the “Haitian state has failed in its sovereign obligation to protect the population.” It diverged from a July 29 statement from the Haitian bishops’ conference, which said state authority must be restored and that the government must take immediate action to “disarm the gangs, to allow the police to tackle violent crime and create a climate of serenity and confidence.” The bishops’ message stopped short of calling for action from the international community.

The calls from the bishops and the religious came after a month of violence in Port-au-Prince in which a 10-day battle between two armed gangs in the populous slum of Cité Soleil killed 209 people and forced 3,000 to flee their homes. On July 24, a police inspector was killed in front of the congregation during a Sunday service at a Protestant church in Croix-des-Bouquets, taking the number of officers killed in 2022 to more than 30.

On July 27, the Catholic cathedral in Port-au-Prince was set on fire during a turf war between two gangs; firefighters were able to extinguish the fire before it did major damage.

Gangs also were responsible for arson attacks on courthouses in Port-au-Prince and Croix-des-Bouquets; files and pieces of evidence were burned.

Father Frechette said he had spent the past two weeks “on my belly in Cité Soleil and at the burned cathedral.” 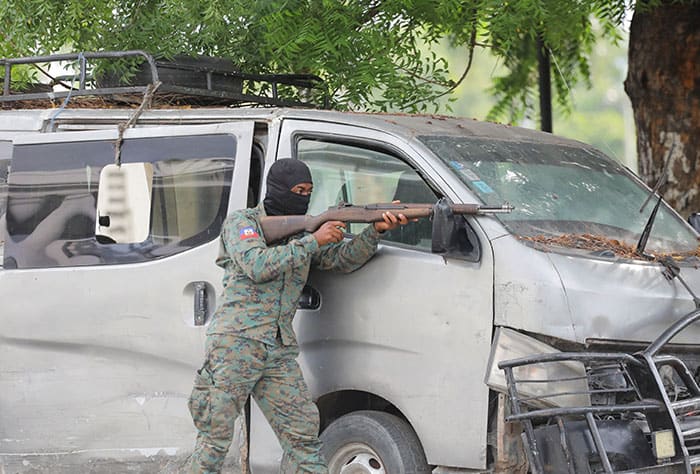 A Haitian soldier positions himself outside the military base near the presidential palace after gangs waged intense gun battles in Port-Au-Prince July 27, 2022. Religious orders working in Haiti have called on the international community to directly intervene to address the reign of terror of armed gangs they described as “diabolical, frightening and unacceptable.” (CNS photo/Ralph Tedy Erol, Reuters)

“It is way past obvious that there is no state,” he wrote. The priest said there is a “a civil war in the clothing of gang wars” and wrote the gangs are “sponsored by politicians, the government and other actors.”

The Justice Coalition of Religious described the July 16 U.N. Security Council unanimous vote to extend the mandate of a small U.N. political mission in the country as “nowhere near what Haiti needs from the U.N. to enhance the protection of lives and human rights of Haitians.” It called a vote to ban small weapon sales to Haiti “insufficient.”

The coalition’s calls were echoed in an Aug. 6 editorial in The Washington Post that called for “muscular international intervention” and decried the much-called-for “Haitian-led solution” as a chimera.

The situation has taken a toll on the activities of the religious orders in Haiti. The Sisters of Charity of St. Elizabeth, working near Croix-des-Bouquets, reported that, because of the violence, they lost $250,000 in funding for new projects that would have protected women and children and reduced child trafficking; investors considered the situation too risky.

“When you leave your home, you take your life in your hands and carry a coffin on your shoulder,” said one team member, when describing the state of constant fear for their lives.

Croix-des-Bouquets is the area where 17 North American missionaries were kidnapped in 2021 and held for two months by the notorious Mawozo gang.

The Sisters of Charity of St. Elizabeth reported that the headmaster of the school run by the order was kidnapped recently by a gang. The headmaster, known as Pastor Cesar, was released when one of the kidnappers, a former pupil at the school, recognized him and told the others that the pastor does a lot of good in the community. The pastor, who lives in Croix-des-Bouquets, is worried he will be kidnapped again.

The same school offers a free medical clinic for children and local residents, but the doctor no longer comes to the school because he fears being kidnapped and held for ransom. The doctor now sees patients on Zoom when there is electricity, and the nurse resident on the school property distributes prescribed medicine.

“Nearly all Haitians are asking why the international community does not come to their assistance,” the Justice Coalition of Religious wrote in the open letter. “We implore you to listen to the cry of the people of Haiti,” expressed in the testimonies sent by some religious working in that country.

Featured image: Members of the Haitian National Police patrol a street as ongoing gun battles between rival gangs forced residents to flee their homes in Port-Au-Prince April 28, 2022. Religious orders working in Haiti  have called on the international community to directly intervene to address the reign of terror of armed gangs they described as “diabolical, frightening and unacceptable.” (CNS photo/Ralph Tedy Erol, Reuters)