Death of a man who was thought to be the last of his tribe in the Amazon basin raises concerns about disappearance of Indigenous cultures.

After the death in the Brazilian forest of an Indigenous man who was thought to be the last of his tribe and who shunned all contact with outsiders, Amazonian church leaders said it is more important than ever to protect the region’s remaining semi-nomadic, isolated peoples.

The man, who lived alone in the Tanaru Indigenous Territory in the western state of Rondônia, was known as the “man of the hole,” because of his practice of digging concealed pits, probably to trap game.

Little is known about him or his tribe, which was decimated as loggers and cattle ranchers moved into the area in the 1980s and 1990s. He had lived alone for at least 26 years and resisted all efforts at contact, according to the Brazilian government’s Indigenous affairs agency, FUNAI, which monitored him. He was found dead in his hut in late August.

“Another age-old culture disappears without our knowledge, due to the genocide perpetrated by farmers and loggers,” the Brazilian bishops’ Indigenous Missionary Council, or CIMI, said in a statement. “He must be remembered and perpetuated as a symbol of the resistance of all peoples who, in defense of autonomy, adopt the strategy of voluntary isolation.”

The Amazon basin is home to more than 100 semi-nomadic Indigenous groups that shun contact with the outside world. Most live along rivers in the densely forested region along the borders between Brazil and Peru, Bolivia, Colombia and Venezuela, and along the border between Peru and Ecuador.

The people, who build huts and plant gardens, but also migrate through large areas to gather food, are thought to be descended from groups that fled toward the headwaters of rivers to escape the brutality of the rubber boom in the early 1900s, when tens of thousands of enslaved Indigenous people are believed to have died.

“When a people disappears, a culture disappears, a history of thousands of years disappears. That’s a wake-up call to humanity that the process of extinction of biodiversity is followed by the process of extinction of human beings,” José Gregorio Diaz Mirabal, a leader of the Coordinator of Indigenous Organizations of the Amazon River Basin, or COICA, an umbrella group of Amazonian Indigenous organizations, told Catholic News Service.

“For us, a unique human being dies — unique peoples that existed and were exterminated. It’s a process of extermination that began with the rubber boom, later with oil production and now with pressure from climate change,” added Diaz, who participated in the Vatican’s 2019 Synod of Bishops for the Amazon.

“Unfortunately, there is no strong, clear policy for the protection of these brothers,” he added.

In Brazil, FUNAI’s official policy is to monitor those groups from a distance, without attempting to contact them. But funding and safeguards have been rolled back under President Jair Bolsonaro, resulting in invasions of Indigenous territories by illegal loggers, fishers and miners.

The CIMI support team’s 11 members work in the field, gathering information about isolated groups without contacting them, and urging the government to take protective measures, especially for groups whose existence has not been reported before.

While FUNAI has recorded 114 isolated groups, CIMI has reports of 117 in the Amazon region and one in the central Brazilian state of Goiás.

But Brazil’s federal government officially recognizes only 28 such groups, according to Guenter Francisco Loebens, a missionary and expert on Indigenous peoples who has worked in the Amazon since 1978 and is a member of the CIMI support team. 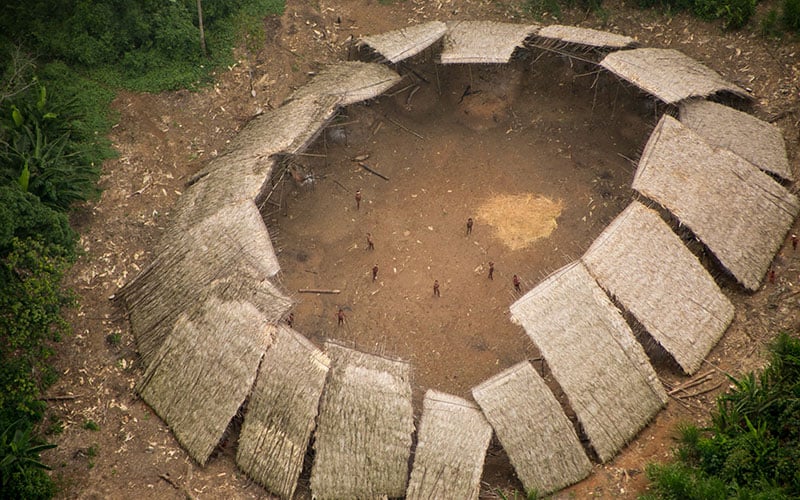 The Amazon region is home to more than 100 isolated Indigenous groups like this one in Brazil. (CNS photo/courtesy FUNAI)

According to CIMI, at least five groups of isolated peoples are at imminent risk of extermination in the Brazilian states of Pará, Rondônia, Mato Grosso and Roraima.

Both CIMI and the Pan-Amazonian Church Network respect the autonomy of those people and their desire to remain isolated, Loebens told CNS, adding, “Any kind of contact would be a forced contact, because they have already spoken out against it.”

In Ecuador, the Tagaeri and Taromenane, two isolated peoples living in the highly biodiverse Yasuni National Park, are increasingly threatened by activities related to oil operations in the park, according to a case currently before the Inter-American Court of Human Rights, which held a hearing on the case Aug. 23 in Brasilia, Brazil.

The lawsuit accuses the Ecuadorian government of failing to take steps to prevent violent encounters in 2003, 2006 and 2013, which resulted in deaths of members of the groups.

Contact between isolated groups and outsiders can be deadly, partly because isolated Indigenous people lack resistance to even common illnesses like colds and flu, and partly because of the potential for violence.

In Peru, one man was killed and another injured when they were shot with arrows while fishing on a river in the southeastern Madre de Dios region. In that area, a legal timber concession overlaps an area sometimes used by nomadic groups, which Indigenous leaders are requesting for an expansion of an existing reserve.

Because of such overlapping claims, combined with delays in the official designation of reserves for isolated groups, “we could be prone to having what happened in Brazil repeated in Peru,” said Andrea Bernal, national program coordinator for the Amazonian Center for Anthropology and Practical Application, a nonprofit organization created by the Catholic bishops in Peru’s Amazonian region.

In Peru’s northeastern Loreto region, the Regional Organization of Indigenous Peoples of Eastern Peru, known as ORPIO, recently won recognition of a new reserve to protect isolated groups along the border with Ecuador and is lobbying for a protective corridor along the border with Brazil.

But a group of regional government officials and business leaders has been lobbying against those reserves and for the national government to repeal a 2006 law that protects isolated tribes. The group claims there are no such peoples in Loreto and that the reserves prevent companies from using the region’s rich natural resources, including timber and oil.

Isolated groups are seen as an obstacle “when people only think about economics and don’t think about integral development,” Bernal said.

But the benefits of protecting the areas where those groups live extend beyond the Amazon, and safeguarding both the isolated groups and the ecosystems where they live is “fundamental” for Catholics, even in distant countries, Bishop Miguel Angel Cadenas of Iquitos, in Peru’s Loreto region, told CNS.

Reserves set aside to protect isolated groups protect the headwaters of rivers, which are sacred to many Indigenous peoples, he said. They also buffer the impact of climate change and reduce the likelihood of a virus that could cause a pandemic jumping from wild animals to humans.

Catholics “must live in keeping with their faith,” Bishop Cadenas added, “and protecting those who are most vulnerable is part of our faith.”

Featured image: A traditional house called a maloca, built by members of an isolated, semi-nomadic group, is pictured in 2011 near the Jandiatuba River in western Brazil. (CNS photo/Peetsa/Acervo CTI, courtesy ORPIO)