Leaders of the global response to HIV and AIDS who gathered in Montreal for the International AIDS Conference praised faith leaders for their contribution to fighting the four decade-old pandemic.

“Faith leaders have helped to keep us on track. You have provided hope to millions of people living with HIV and HIV activists with the power of prayer and faith when we needed it the most,” Vinay Saldanha, director of the U.S. liaison office for the Joint United Nations Program on HIV and AIDS (UNAIDS), told a pre-conference gathering of interfaith religious leaders July 27.

“The report has really bad news,” said Matthew Kavanagh, a special adviser to the executive director for policy, advocacy and knowledge at UNAIDS, in a speech to the interfaith gathering. “But there’s also some very good news, because we’ve built community, because we’ve built resiliency, because faith leaders have come together with community leaders and people living with HIV and built a response that’s able to respond in times of crisis.”

Participants in the interfaith conference heard reports on how faith-based HIV projects had quickly adapted to the COVID-19 pandemic. The church-sponsored Luke Commission health care system in Eswatini, for example, which was founded in response to the AIDS crisis in what was then Swaziland, has cared for 90% of the small African kingdom’s severely ill COVID-19 patients.

The pandemic has exacerbated the challenges of HIV in many areas.

“After only two years of COVID, more than 10 million children in the world have been orphaned by COVID. Two of every three of these are adolescents, and they’re at increased risk of sexual violence, incident HIV, mental health problems and adolescent pregnancy,” said Dr. Susan Hillis, a senior technical adviser for the faith and community initiative of the U.S. President’s Emergency Plan for AIDS Relief, known as PEPFAR, in a presentation to the interfaith gathering.

For several years the Vatican has sponsored an initiative to increase the access of children to HIV testing, diagnostics and medicines. Bringing together pharmaceutical and medical device executives with researchers and church activists, the effort has produced good results. COVID-19 has set back that effort, but one major participant in the effort told the interfaith gathering that the pandemic can’t be blamed for every failure.

“Our progress was stalling even before COVID. Children had 25% less access to care than adults. That shows a lack of political power. Children aren’t protesting, children aren’t at the table, they’re not raising their hands when the Global Fund (to Fight AIDS, Tuberculosis and Malaria) is deciding program priorities. There’s not a chair for children, so they often get left behind. Nobody is against children, but it’s shocking how readily people forget to include children,” said Chip Lyons, president and CEO of the Elizabeth Glaser Pediatric AIDS Foundation.

Some new models of ministry are working well. Hillis delivered an encouraging report to the interfaith gathering about a program in Nigeria’s Benue state that has churches sponsor baby showers for pregnant women and their partners. It expands on an existing tradition of faith communities celebrating pregnancy by blessing expectant mothers during worship. The new practice also involves male partners and offers onsite testing for a variety of health issues, including HIV status. Those who test positive are referred for antiretroviral treatment, which will usually prevent HIV transmission to the newborn child.

Hillis said the program will next expand into mosques as well.

Participants in the interfaith gathering learned how churches have maintained important HIV prevention, testing and treatment programs even in the middle of the war in Ukraine. 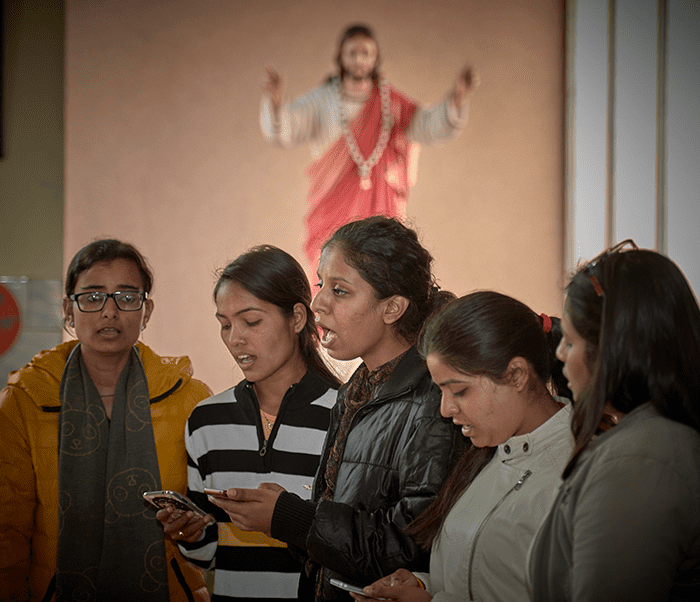 Students from Isabella Thoburn College sing to residents at the Shantiniketan hospice for people living with HIV and AIDS in Lucknow, India, Feb. 9, 2019. Participants in an interfaith conference heard reports on how faith-based HIV projects quickly adapted to the COVID-19 pandemic. (CNS photo/Paul Jeffrey)

“When Russia invaded Ukraine this year, the first people who came to help were from churches. They delivered medicines with us, they provided psychological support for us, and they provided training to soldiers about the importance of HIV testing. The churches organized shelters especially for people living with HIV, along with members of the gay community, because they weren’t accepted in shelters of the general population,” said Valeriia Rachynska, a leader of 100% Life, a Ukrainian group that’s the largest organization for people living with HIV in Eastern Europe and Central Asia.

Jacek Tyszko, the senior adviser on faith engagement in the Geneva office of UNAIDS, reported how the Catholic Church in Poland, which has welcomed hundreds of thousands of Ukrainian refugees, invited staff from the Ukrainian Catholic Church to come to Poland to help address HIV prevention and treatment among the displaced. He said Catholics in Poland often felt reluctant to broach such topics.

Msgr. Robert J. Vitillo, a priest from New Jersey who visited Ukraine and Poland earlier in July as convener of a working group of Catholic humanitarian agencies working in the crisis there, said the response of faith-based groups shouldn’t be surprising.

“We fulfill our mission in walking with people living with HIV and affected by HIV not because they are in some special category, but because we teach and firmly believe that they share our very identity. We are one with them, women and men, girls and boys, with whom we share the gift of being created in God’s very image. Everyone is our neighbor, not just certain people who we may like,” said Msgr. Vitillo, who serves as secretary-general of the International Catholic Migration Commission and health attaché at the Permanent Observer Mission of the Holy See at the United Nations.

Msgr. Vitillo told Catholic News Service that he had done a lot of training with Ukrainian faith groups responding to HIV. “They’ve been trying to continue that ministry, but they’re really overwhelmed with the wide variety of basic human needs created by the invasion,” he said.

“The traffickers got to the border areas before the faith communities could respond,” he said. “But Catholic workers specialized in human trafficking did respond. We’re also doing workshops in psychological first aid for those hosting the refugees, many of whom seek shelter in monasteries, seminaries and church schools. They feel protected there even though many are not Catholic.”

Not everyone in the interfaith gathering felt that international organizations are taking seriously the contribution of the faith community.

Maryknoll Father Rick Bauer, who after 25 years of HIV-related work in Africa recently joined the George Washington Institute for Spirituality and Health in Washington, D.C., as a board-certified chaplain, complained during the interfaith gathering about UNAIDS’ latest report on the pandemic.

“That report is 376 pages long. The word faith is mentioned once. We were in this mission before UNAIDS, and I promise we’ll be here afterward. If you want us to work with you then you have to mention us,” he said.

Msgr. Vitillo said it’s important for faith leaders responding to HIV not to keep their lights under a bushel basket.

“Many people in faith communities have been so busy providing services that we still don’t understand that we need to do more to tell about those services and present the data that demonstrate what we do. We focus on the person, and that’s really important, but we also need to look at and report the numbers,” Msgr. Vitillo said.