NEW YORK (CNS) — Deacon Tom Cornell, a co-founder of Pax Christi USA as well as the Catholic Peace Fellowship and a decadeslong associate of Catholic Worker co-founder Dorothy Day, died Aug. 1. He was 88.

He died at a hospital in Poughkeepsie, New York, near Peter Maurin Farm in Marlboro, New York, where Deacon Cornell and his wife, Monica, lived for nearly three decades. The farm is part of the Catholic Worker in New York, providing hospitality to the formerly homeless and for men recovering from addiction or struggling with physical or mental impairments.

A funeral Mass is scheduled for Aug. 10 at St. Mary’s Church in Marlboro.

Friends in online social media posts recalled Deacon Cornell as “a giant” in Catholic peacemaking and credited his strong dedication to the corporal works of mercy. He joined the Catholic Worker in New York in 1953, serving the homeless and poor who regularly visited Maryhouse and St. Joseph House.

Beyond offering hospitality, he was a writer and editor for The Catholic Worker newspaper, serving for two years as managing editor from 1962 to 1964. 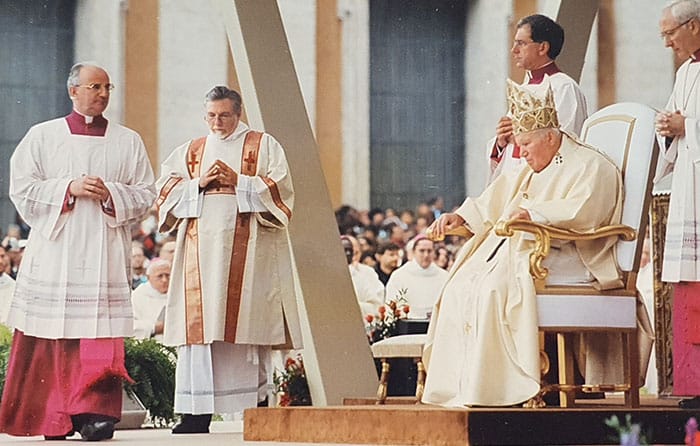 Deacon Tom Cornell, second from left, serves at the Mass of Christ the King on November 26, 2000, at St. Peter’s Plaza in Vatican City, as part of the Fourth World Congress of the Apostolate of the Laity. The Mass was celebrated by St. John Paul II.

While attending then-Fairfield College in Connecticut in the 1950s, the young Cornell read Day’s autobiography, “The Long Loneliness.” He visited the Catholic Worker in New York, beginning a long relationship with Day and the community serving poor and homeless people in the city.

At the Maurin farm until recent years, Deacon Cornell continued to write articles and essays on Catholic peacemaking and to “help where I can” with hospitality and farm work, he told Commonweal magazine in 2014.

His reflections and essays on peacemaking dating to the 1960s were published worldwide and were translated into various languages.

A strong promoter of Gospel-based nonviolence, Deacon Cornell was among the earliest protesters of the Vietnam War, joining two other Catholics workers in July 1963. The demonstration grew to 250 people within 10 days and was the first protest against the war to be broadcast on television.

Afterward for decades, peace groups eagerly sought to bring Deacon Cornell to programs to hear his thoughts on peacemaking and the end of war.

In addition to his affiliation with the Catholic Worker, Deacon Cornell was on the executive staff of Fellowship of Reconciliation, an interfaith peace organization, serving as program director from 1965 to 1979, and on the executive committee of War Resisters League and Workers’ Defense League. 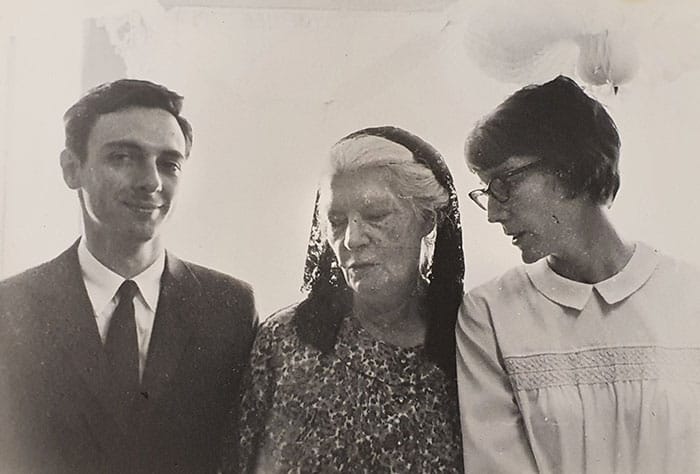 Servant of God Dorothy Day (center) attends the wedding reception of Tom Cornell and Monica Ribar at St. Joseph’s House in New York City on July 16, 1964. The couple often referred to Day as their matchmaker.

His background in peacemaking led to Deacon Cornell becoming a consultant for the U.S. bishops as they drafted a pastoral letter on peace, “The Challenge of Peace: God’s Promise and Our Response,” which was published in 1983.

In addition, he served on the executive committee of the New York-based Dorothy Day Guild, which has promoted the sainthood cause for Day.

The Archdiocese of New York announced in 2016 that a canonical inquiry into Day’s life was underway as part of the effort.

At the time, Deacon Cornell welcomed the news in an interview with Catholic News Service, saying he hoped the step would lead the “Catholic Church establishment” to adopt Day’s staunch anti-war positions.

He also said he hoped the process “will speed the day when all the world will know that Catholics favor conscientious objection to war and the development of nonviolent alternatives to conflict resolution and resistance to the imposition of tyranny from within or without a nation state.”

Deacon Cornell met Monica, the daughter of Catholic Workers, at the Catholic Worker in New York and they married in 1964. They moved to Newburgh, New York, with their young children. They eventually moved to the Peter Maurin Farm in 1993.

His daughter, Deirdre Cornell of Highland, New York, recalled how her father actively supported the civil rights movement in the 1950s and 1960s, marching with the Rev. Martin Luther King Jr. in Selma, Alabama, in 1965. 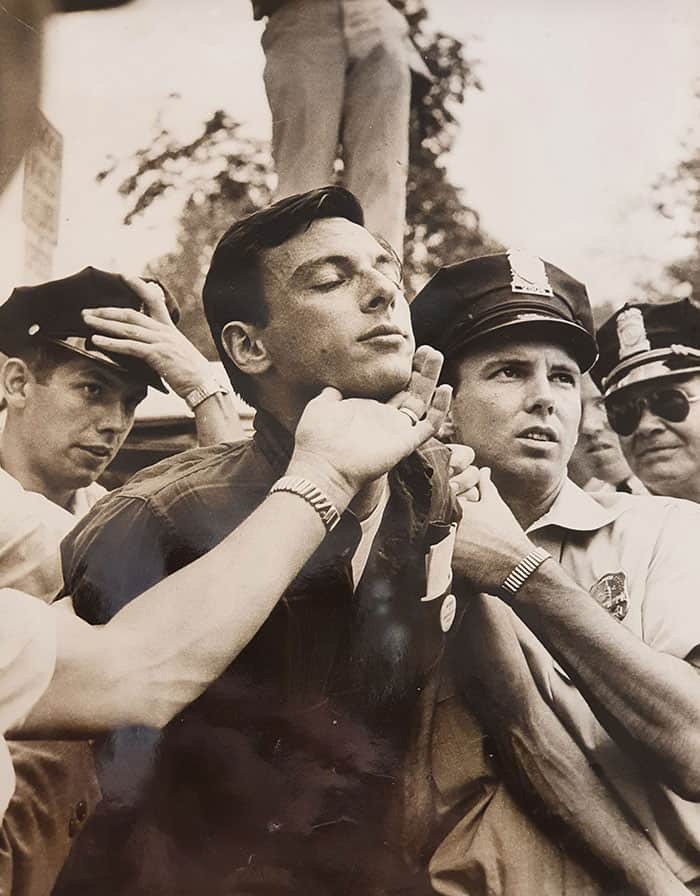 Thomas Cornell is taken under arrest while protesting the Vietnam War in Washington, D.C., on August 9, 1965. He would later serve jail time for burning his draft card after another arrest.

She also said his life was rooted in the Catholic Worker. The Cornells also ran a house of hospitality in Waterbury, Connecticut. He also served as director of soup kitchens for a local council of churches in Waterbury for 11 years.

He was ordained a deacon in the Archdiocese of Hartford, Connecticut in 1988. In Marlboro, he served as deacon at St. Mary’s Church.

Pax Christi USA said Deacon Cornell was one of about a dozen people who attended what is described as the “Pax Christi Affiliation Discussion” in July 1972 from which the organization eventually was formed. He also was a member of the group’s National Council in the mid-1970s, regularly spoke about peacemaking nationwide and mentored young peace advocates for decades.

In 2021, he was named a Pax Christ USA ambassador of peace for his efforts to promote Gospel nonviolence, peacemaking, reconciliation and justice.

“Tom’s wit and wisdom, his prophetic edge and challenging witness have been gifts to the Catholic peace and justice movement for over half a century,” Zokovitch said. 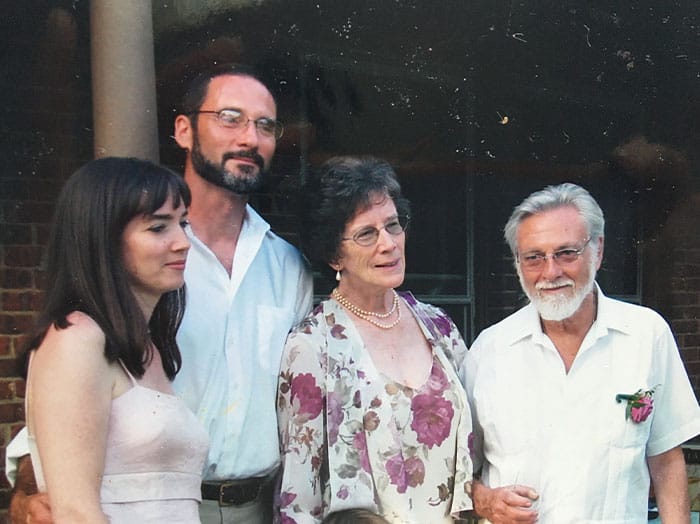 Tom and Monica Cornell (right to left) are shown with their son Thomas Christopher and daughter Deirdre at The Grail Center in Cornwall-on-Hudson, New York, in July 2009, after the renewal of their wedding vows on the occasion of their 45th anniversary.

“I had the opportunity to speak with Tom and share his company a handful of times and always came away from those times invigorated by his spirit and more deeply rooted because of his critiques of society and government, but also the church and our own movement,” he said.

“We’ve lost a tremendous figure and offer our condolences to Monica, his family and all who know and love him,” Zokovitch added.

Shawn Storer, director of Catholic Peace Fellowship, which is based in South Bend, Indiana, said Deacon Cornell had a “huge influence” on his life.

“Tom was a Christian personalist … always seeing the person in front of him. Tom was one of the most encouraging Christians I ever encountered,” Storer said.

He was born in Bridgeport, Connecticut in 1934 to Thomas Cornell and Ann (Caruso) Cornell.

Besides his wife of 58 years, he is survived by son Thomas Christopher and his partner, Casandra Beam of Marlboro; daughter Deirdre, her husband, Kenney Gould, and their five children of Highland; a sister, Ann Marie Tomasillo of Boynton Beach, Florida; and a niece and two nephews.

Featured image: Thomas Cornell is pictured during his last arrest along with other activists including Jesuit Father Daniel Berrigan, in New York City, where he belonged to the Catholic Worker community. Cornell died on August 1, 2022.