As Pope Francis calls for dialogue, international Church leaders and Nicaraguan Catholics speak out against the arrest of Bishop Álvarez.

Following the arrest of a bishop and 11 others, police continued harassing Nicaraguan Catholics, even as Pope Francis called for “open and sincere” dialogue in the Central American country.

Photos posted to social media showed police and paramilitaries surrounding St. Michael the Archangel Parish in Masaya, Nicaragua, Aug. 21 — the same day Pope Francis expressed “concern and sorrow” for the situation in Nicaragua, where the Catholic Church has suffered increasing persecution from the regime of President Daniel Ortega.

Bishop Rolando Álvarez of Matagalpa remains under house arrest in Managua after being seized in an Aug. 19 raid on the diocesan offices. The 11 other priests and laity arrested alongside the bishop continue languishing in the notorious El Chipote political prison. 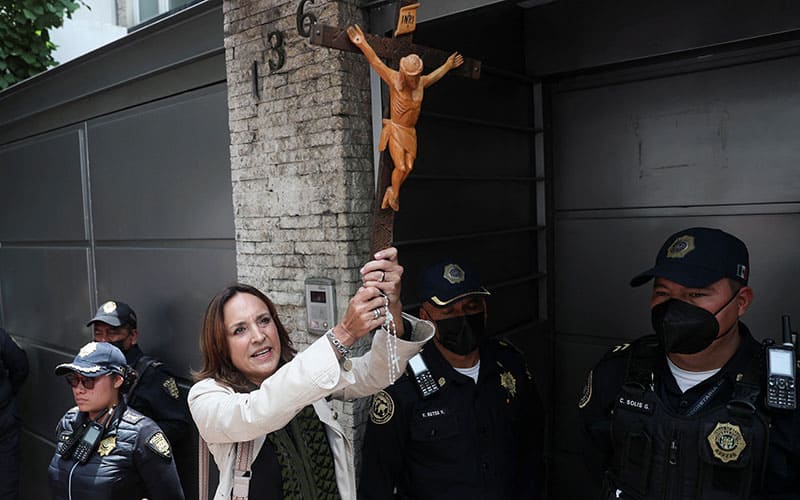 A woman holds a crucifix outside the Nicaraguan Embassy in Mexico City Aug. 16, 2022. She was participating in a protest to end persecution of the Church and of opponents of Nicaraguan President Daniel Ortega. (CNS photo/Edgard Garrido, Reuters).

Cardinal Leopoldo Brenes of Managua visited Bishop Álvarez Aug. 19 and described the bishop as “physically deteriorated, but spiritually strong,” according to the Nicaraguan bishops’ conference. The bishops’ statement was subdued — a reflection of the risks of speaking out in Nicaragua, though prelates outside the country were more vocal.

“I want to tell Nicaraguans not to lose hope; let us trust in the Lord and pray for Bishop Rolando Álvarez and the priests of Matagalpa and the others who are imprisoned together with other laypeople, and all the political prisoners of these countries,” Auxiliary Bishop Silvio José Báez said in his Aug. 21 homily, delivered in Miami, where he is exiled.

His comments followed Pope Francis’ call for dialogue in Nicaragua, where Church charitable projects have been prohibited, priests arrested and stopped from celebrating Mass and the Missionaries of Charity expelled. During his Aug. 21 Angelus address, Pope Francis did not specifically mention Bishop Álvarez’s arrest, but he prayed for peace in the country through Mary’s intercession.

“The Vatican has preferred a quiet, backdoor engagement with the government to try and persuade it to downscale its repressive tactics and resume talks with the opposition, rather than public condemnation,” said Tiziano Breda, Central America analyst for the International Crisis Group.

“This stems from the understanding that the louder and more outspoken is the critic against Ortega … the more livid the presidential couple’s reaction is going to be, and any feeble communication channel still possibly open is likely to be shut,” he added. Ortega’s wife, Rosario Murillo, is vice president.

A priest in Nicaragua, who preferred anonymity for security reasons, called the papal comments, “bittersweet,” adding, “They say the pope was not explicit, but at least he broke the silence.”

The pope’s call for dialogue was met with skepticism by many Nicaraguans on social media.

“An ‘open and sincere’ dialogue to restore peaceful coexistence in Nicaragua, as Pope Francis proposes, is only possible without a police state, without political prisoners, and with international guarantors who supervise the agreements,” tweeted prominent Nicaraguan journalist Carlos F. Chamorro, editorial director of the news organization Confidencial.

The Nicaraguan bishops mediated a national dialogue in 2018 after protests erupted, demanding Ortega’s ouster. The talks broke down, however, as the bishops saw little goodwill on the government side.

In a 2021 interview with Catholic News Service, Bishop Álvarez defended the dialogues, which he said were held as “Nicaragua was literally bleeding to death, and it was necessary for all the parties directly involved to sit down and talk to make an effort to find a solution.”

Bishop Álvarez said of the Church’s experience since 2018: “We have vividly experienced what the spirit of Pope Francis means when he has called us to build a field hospital in churches, which have since been even more open.”

He continued, “We have experienced firsthand what it means to be a Church in exodus, a church that leaves its parishes, a Church on the periphery accompanying the most vulnerable, the poorest, the simplest, a Church … that we have not only lived conceptually, but experientially.”

The National Police said Bishop Álvarez was under investigation for “trying to organize violent groups, inciting them to execute acts of hate against the population, provoking an environment of chaos and disorder, disturbing the peace and harmony in the community with the objective of destabilizing the Nicaraguan state and attacking the constitutional authorities.”

This announcement came on the heels of Bishop Álvarez vociferously objecting to regulators ordering the closure of Catholic radio stations in the Diocese of Matagalpa; parishioners had tried to impede police confiscating equipment. 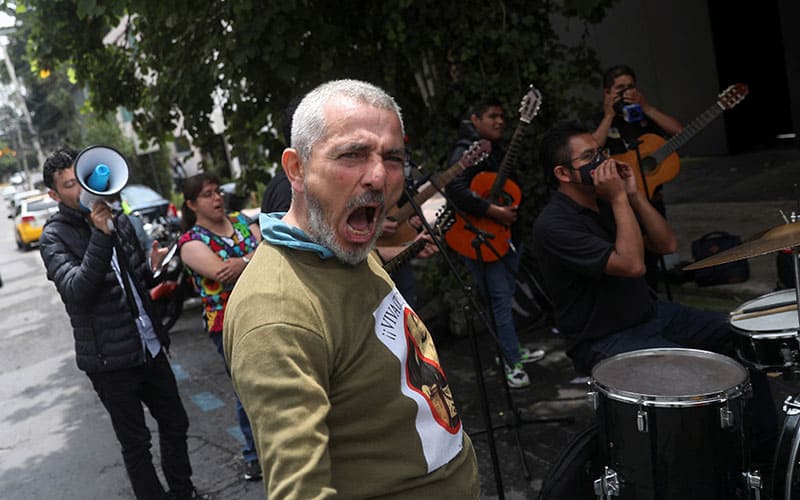 A man gestures during a protest outside the Nicaraguan Embassy in Mexico City Aug. 16, 2022. Protesters were demanding respect for religious freedom in Nicaragua. (CNS photo/Edgard Garrido, Reuters)

Around the world, especially in the Americas, Catholic leaders issued statements expressing their solidarity with the people and the Church in Nicaragua and urging Catholics to pray for peace.

Bishop David J. Malloy of Rockford, Illinois, chairman of the U.S. bishops’ Committee on International Justice and Peace, expressed “our continued steadfast solidarity with our brothers in the Nicaraguan episcopate, along with their priests and foreign missionaries, in their calling to freely proclaim the Gospel and live the faith. The faith of the Nicaraguan people, who stand in solidarity with their bishops and priests, is an inspiration for us all.”

Archbishop José Domingo Ulloa of Panama called for Bishop Álvarez’s “immediate release,” adding that “the aberrant events surrounding this detention are cause for alarm and pain in the entire Latin American Church.”

Puerto Rico’s bishops expressed “growing concern that the powers of the state are being used to shut down Catholic radio stations (and) deport religious who work with those who are most vulnerable and abused, while that same authority is not used to avoid attacks on religious freedom and the destruction of places of worship, mainly Catholic.” Noting that the destruction of buildings “is often” followed by attacks on people, the bishops added, “God forbid!”

The Cuban bishops thanked Nicaragua’s Catholics for their “witness of fidelity to Christ” shown in “the communion they have maintained amid the tests and the serene trust in the risen Lord that they are proclaiming in these hours of the cross.”

Chile’s bishops urged their country’s Catholics to pray for peace in Nicaragua, adding, “We join the call for an end to the violence in that country and the persecution experienced by the Nicaraguan sister church.”

In the wake of a statement about Peru’s political crisis, that country’s bishops spoke out in support of the Nicaraguan Church, saying: “Violence has never built up, it has only sown the seeds of poverty and hatred. Violence, especially when it is unjustified, breaks down the harmony, respect and peace that our peoples need to achieve integral development and friendly social relations.”

The Latin American Academy of Catholic Leaders, which includes civic leaders, politicians and former heads of state, called for respect for freedom of expression and worship.

“Freedom of worship and religion is one of the first rights whose recognition, respect and guarantee has been achieved in the history of contemporary law,” they wrote. “This right is a pillar of freedoms, as it is related to freedom of thought and conscience, and its protection extends to believers and nonbelievers.”

In Italy, the bishops called the arrests of Bishops Alvarez and the others “a very grave act that does not leave us indifferent and which leads us to remain vigilant on what is happening to our brothers and sister in faith.”

“The circumstances and context of such arrests are of particular apprehension, not only because (they) target Christians who are prevented from the legitimate exercise of their beliefs, but because (they) come at a time when the most basic human rights seem to be greatly threatened.”

Contributing to this story was Barbara Fraser in Lima, Peru.

Featured image: People pray outside the Nicaraguan Embassy in Mexico City Aug. 16, 2022. They were demanding respect for religious freedom in Nicaragua and an end to the persecution of the Church. (CNS photo/Edgard Garrido, Reuters)