Bianca Jagger, a human rights advocate, joins other Nicaraguans to call for the release of Bishop José Álvarez, who is being held under house arrest.

WASHINGTON (CNS) — Bianca Jagger counts herself among the thousands of Nicaraguan Catholics in constant vigil for news about detained Bishop José Álvarez, who has been under house arrest in northern Nicaragua with 11 companions for 12 days.

Like other Nicaraguans living far from their native land, Jagger regularly checks the news, Twitter, Facebook, to keep an eye on the volatile situation surrounding the bishop and his companions. They appear now and then via Facebook Live, praying the rosary, singing, or at Mass inside a church building described as the curial offices of the Diocese of Matagalpa, where they’re detained.

“I feel a great deal of worry and helplessness. I don’t know how else to support Bishop Álvarez other than to use my voice, to join in prayer (for his liberation). He has been kidnapped,” she said in an Aug. 12 interview with Catholic News Service from London. “He is a hostage of a government that has committed crimes against humanity.”

Jagger, who heads a human rights foundation bearing her name, long has used her global name recognition to defend the afflicted, particularly in Latin America.

Although the rights of women and girls and the environment are at the forefront of her U.K.-based Bianca Jagger Human Rights Foundation, often she has spoken against the spiraling situation involving her native country, the repression of the populace, the fraudulent elections, and now the attacks against the Catholic Church to which she belongs. It harkens memories of darker times in the region.

“The assassination of Monseñor Romero,” as Salvadoran St. Oscar Romero is popularly known in Latin America, “had a great impact in my life,” said Jagger, who attended Catholic schools in the country’s capital of Managua, where she was born, and is a practicing Catholic.

St. Romero spoke against the killing of innocent civilians and socioeconomic injustices perpetrated against the poorest sectors of the Salvadoran populace in neighboring El Salvador. He was fatally shot in a chapel as he celebrated Mass in 1980, a day after calling for a stop to government repression.

Modern-day Nicaragua, in many ways, mirrors that past, as women and men religious, priests and bishops have been attacked and harassed. Some have been expelled by the government of President Daniel Ortega and Vice President Rosario Murillo, his wife.

Recently, the government expelled some Missionaries of Charity to Costa Rica. Auxiliary Bishop of Managua Silvio Baez, who had spoken against human rights violations and the country’s fraudulent elections, left the country in 2019 following death threats and is in Miami. In March, the government expelled the Holy See’s ambassador, to the “surprise and pain” of Vatican officials.

Now Bishop Álvarez, who has spoken against the violation of the human rights of political prisoners, finds himself fending off veiled threats of harm and expulsion, including by Murillo, on social media. Some videos have shown photos of his head in the crosshairs with the vice president saying that those who are bitter “disappear.”

“My fear with Bishop Álvarez is … what happened in El Salvador,” Jagger said. “That’s why I can’t sleep well and I’m doing everything I possibly can to speak up, to use my voice, calling on others to protect Bishop Álvarez.”

She has asked various bishops’ conferences and Catholic leaders to step in.

“The solution is not to get him out (of Nicaragua), the solution is to defend him, to defend the church, to demand that (the government) free him,” she told CNS. “That’s why I’m asking all the bishops’ conferences around the world, including the U.S. Conference of Catholic Bishops, specifically, to speak up, to defend Bishop Álvarez.”

Though many bishops’ conferences from region, including the Latin American bishops’ council, known as CELAM, have publicly defended the prelate, as of Aug. 15 there had been no word from the USCCB.

Jagger said she also is pleading with Pope Francis and Vatican officials to say something.

On Aug. 11, Msgr. Juan Antonio Cruz Serrano, the Vatican’s permanent observer to the Organization of American States, called for dialogue.

“The Holy See appeals to the parties to find ways of understanding, based on respect and mutual trust, seeking above all the common good and peace,” he said. 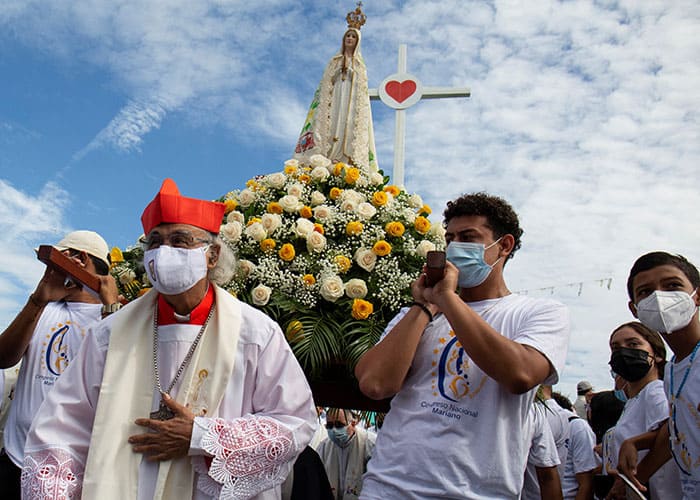 Nicaraguan Cardinal Leopoldo Brenes Solórzano of Managua leads a Marian event in the atrium of the Metropolitan Cathedral in Managua Aug. 13, 2022, after police banned a Catholic procession and pilgrimage in the capital citing internal security reasons. (CNS photo/Maynor Valenzuela, Reuters).

For Jagger, negotiations must involve allowing the bishop to stay in Nicaragua. Getting a second bishop out of the country would only help the Ortega government continue its path to repression, she said.

Though she said she once supported the revolution that brought him to power, it’s now obvious that Ortega’s only interest is power, not people, she said.

And Bishop Álvarez’ response — showing humility by getting down on his knees to pray while surrounded by soldiers, showing love by singing to his captors, blessing them, offering forgiveness — has captivated Nicaraguans and non-Nicaraguans, Catholics and nonbelievers, because it’s the antithesis of power, she said.

“He emanates tranquility. He is a man of faith and courage, and not for one moment have we heard a word of hate from him, only solidarity with the people of Nicaragua, and he doesn’t want to leave Nicaragua,” she said. “And that’s why I plead with His Holiness (Pope Francis), that he doesn’t order him to leave Nicaragua.”

If she could say something to Bishop Álvarez, she’d tell him how much she is praying for him and the group.

“May God protect you and continue to give you strength,” she said she’d tell him. “You are an example to all of us.”

Featured image: A pilgrim prays with a rosary during a Marian event in the atrium of the Metropolitan Cathedral in Managua, Nicaragua, Aug. 13, 2022, after police banned a Catholic procession and pilgrimage in the capital, citing security reasons. (CNS photo/Maynor Valenzuela, Reuters)