in Bangladesh, has spent her life mentoring and teaching the young.

“Do you know Sister Miriam?” Professors asked me this question repeatedly when I arrived to teach at Holy Spirit Major Seminary in Dhaka, Bangladesh. Maryknoll Sister Miriam Francis Perlewitz had taught New Testament there for 25 years. Young priests’ eyes sparkled with appreciation at the mention of her name.

Did I know Sister Miriam? Long before welcoming me to Bangladesh in 2013, she had welcomed me to Maryknoll in 1956. I was little more than a teenager when Sister Miriam, as assistant novice director, mentored us young and enthusiastic missioners-in-the-making.

During her own first years at Maryknoll, the musically gifted young Sister Miriam — an accomplished pianist — was influenced by our founder, Mother Mary Joseph Rogers. “During our summer break,” she recalls, “Mother would … allow me to listen to her records of classical music since we were not permitted to have outside influences like newspapers or radio.” As choir director, Sister Miriam led the music for Mother Mary Joseph’s funeral Mass.

“What a privilege to have been with Mother in those formative years,” she says.

Having lit the fire of mission in us in the U.S., Sister Miriam went on to do the same at Maryknoll Convent School in Hong Kong. Then, she established the Maryknoll Sisters novitiate in the Philippines with Sister Joan Cordis Westhues. “I learned much from Miriam Francis,” says one of their novices, Maryknoll Sister Rosalinda Barrozo. “And the beautiful friendship between these two sisters was a living example to me.”

Returning to the States, Sister Miriam earned a doctorate in Biblical Languages and Literature at Saint Louis University and became professor of New Testament at the Maryknoll School of Theology. In 1985 she began alternating teaching semesters at Maryknoll and the major seminary in Dhaka.

Originally from Milwaukee, Wisconsin, the missioner recalls her first impressions of the country she now calls home. “When I entered Bangladesh for the first time, roads were not paved, nor [were many] buildings constructed,” she says. Although Bangladesh is densely populated, she noted the sparsity of its landscape: “There was only dusty, barren land to tread in a vast expanse of openness.” She remembers thinking, “I am now a citizen of this world, walking the earth for the first time.” 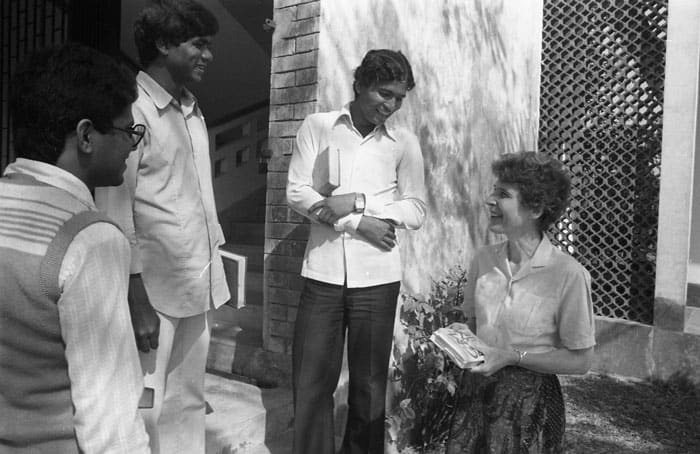 When Sister Miriam was assigned to Bangladesh full-time in 1992, Sister Joan was ending her mission in the Philippines. The sisters teamed up once again. They attempted to run a drug rehabilitation program for women — but soon learned that Bangla culture discouraged wives and daughters from undergoing residential rehabilitation.

Undaunted, the sisters said, “If we can’t cure drug addiction, we can work to prevent it.” Sitting at their dining room table, they developed a values-based educational program for children and youth.

By 1996 the program was translated into Bangla, and quickly took root in schools and parishes in three dioceses — and beyond. Bangladeshi parents, whether Muslim, Hindu, Buddhist or Christian, grasped the importance of preparing their children for the challenges of a rapidly-changing society. But, how to support the program?

Back to the dining room table. At the suggestion of local staff, the sisters made plans for an English medium school that would incorporate the program and eventually include all grades, up to A level (4th year of high school). Based in the Monipuripara neighborhood, it would make high-quality education accessible to families of varying income levels. In 2001, the Bangladesh Alternative Course for Human Advancement (BACHA, which in Bangla means “to rise up” or “to live again”) opened its doors for the first nursery class.

The school was the first of its kind in Bangladesh: based on critical thinking, not rote memorization. The sisters progressively taught each grade level and reinforced methodology by training the Bangla teachers who followed. They also invited experienced teachers, mostly friends, to serve as short-term volunteers. The school was so successful that parents register their children at birth! 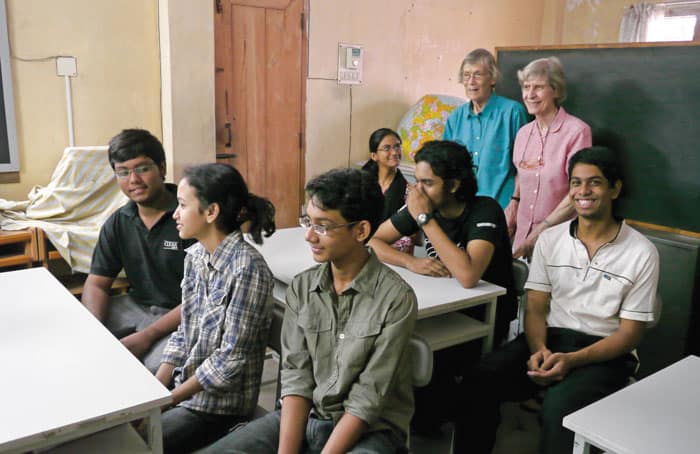 Elias D’Costa, the first president of the school’s board of trustees, wrote in the school’s 10th Anniversary Yearbook: “The sisters have invented a unique style of education unparalleled in the country.”

“BACHA [is not] a pressure cooker to attain the highest grades,” a student wrote in the yearbook. “Teachers here explain the logic behind facts, formulas, theories, so we assimilate them for a lifetime.” Instructors include the sisters’ former pupils, graduates who went on to earn advanced degrees.

One of Sister Miriam’s many contributions to BACHA was inviting music teachers to give classes in violin and other instruments to students. Some of these youngsters are now members of the nascent national orchestra. Sister Miriam also fostered the visual arts. I will never forget the hallways alive with the children’s originals, many absolutely exquisite!

In 2010, when Sister Joan became ill, Sister Miriam resigned from the seminary to assume direction of the school, and continued on after Sister Joan died in 2015. Sister Miriam now serves as resident instructor and mentor for BACHA students and staff. I remember how little children routinely burst into her office to get her seal of approval on their school work or to ask in perfect English cadences, “How are you, Sister Miriam?” Her lavish praises made the tykes feel 10 feet tall. 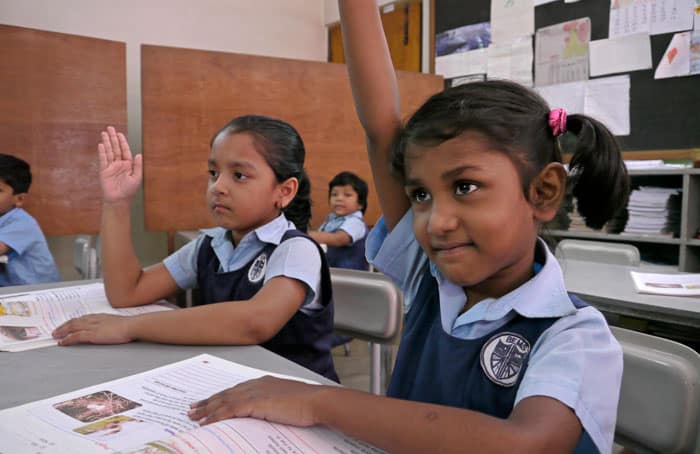 Young students participate eagerly at BACHA, the first school of its kind in Bangladesh with a curriculum developed by Maryknoll sisters, in 2009. (Sean Sprague/Bangladesh)

I know, because I sat across from her at the dining room table and soaked in the nurturing that had started for me years before.

At Holy Spirit Seminary, many young priests told me, “Sister Miriam was the best teacher I ever had. She made us think.” At BACHA, I observed daily how she encouraged and inspired parents, teachers and students alike.

At 91, Sister Miriam still does what she has done throughout her life: she mentors the young, encouraging them to believe in themselves and constantly evoking the best in them. Like a musician who not only plays for others but teaches others to play, she has generously passed on noble aspirations: to her younger Maryknoll sisters, to seminarians and theology students, to teachers in training and to pupils — indeed, to all the students fortunate to learn from her, whose hearts she taught to sing.

Maryknoll Sister Claudette LaVerdiere has served as a teacher in Tanzania, Kenya and Bangladesh.