John Siyumbu, born in East Africa, has become the first Maryknoll priest ordained from the overseas local churches since the mission society officially opened up to foreign vocations.

The ordination Mass was celebrated on Friday, June 3, the Feast of the Uganda Martyrs. Cardinal Luis Antonio Tagle, Prefect of the Vatican’s Congregation for the Evangelization of Peoples, was the ordaining prelate at Our Lady Queen of Apostles Chapel in Ossining, New York.

In his homily, Cardinal Tagle advised Father Siyumbu to always remember how Jesus the Good Shepherd had sent him many people throughout his life, beginning with his family, teachers and Maryknoll missionaries who inspired him in Kenya.

“Remember, even if they call you ‘Father,’ they call you all of these titles, remain a sheep under the care of Jesus. For only by receiving Jesus’ pastoral care of you, will you be able to do as he does,” Cardinal Tagle said. “So like him, wherever you are assigned consider the people entrusted to your care as your own. For them you will give everything — your life even — because that is how the true shepherd takes care of the flock.” 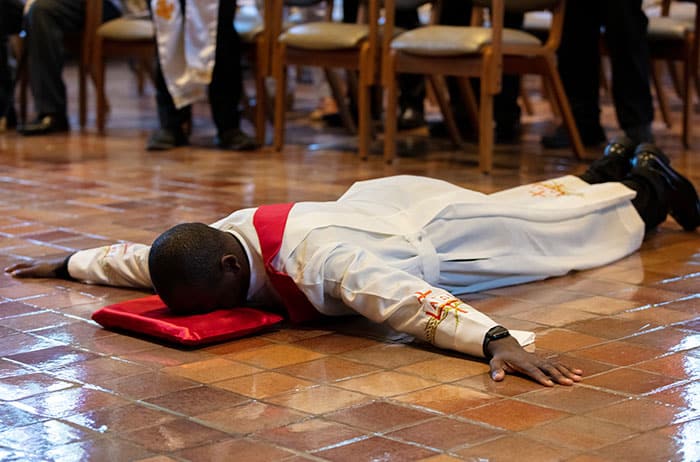 Maryknoll Deacon John Siyumbu lies prostrate before the altar as the Litany of the Saints is sung during the ordination rite. Cardinal Luis Antonio Tagle presided at the ordination, held June 3, 2022 at Our Lady Queen of Apostles Chapel in Ossining, New York. (Octavio Duran/U.S.)

Closed to the public due to COVID-19 restrictions, the intimate ceremony was celebrated with social distancing precautions. Maryknoll priests and brothers, a small group of Maryknoll sisters and limited guests were present. Father Siyumbu’s family was unable to receive visas from the U.S. Embassy in Nairobi to be present at the Mass. Instead, they joined the ordination by live-streaming through Maryknoll’s social media or YouTube channel, along with friends from East Africa, the United States and Bolivia, where Siyumbu served during his Overseas Training Program.

For Father Lance Nadeau, Maryknoll Superior General and concelebrant of the Mass, it was a joyful day. “We are grateful to Almighty God for the gift of vocation,” he said. Father Nadeau went on to acknowledge, “This happy day also has its deep sadness for us, especially for John, because his family is not with us.” He addressed Siyumbu’s family members in Swahili and Luhya, thanking them for their encouragement of John’s vocation.

“You have opened a new page in our Maryknoll mission,” Father Nadeau said to Father Siyumbu. “Welcome into Maryknoll, and fly the flag of Good News and the mercy of Christ to all people.” 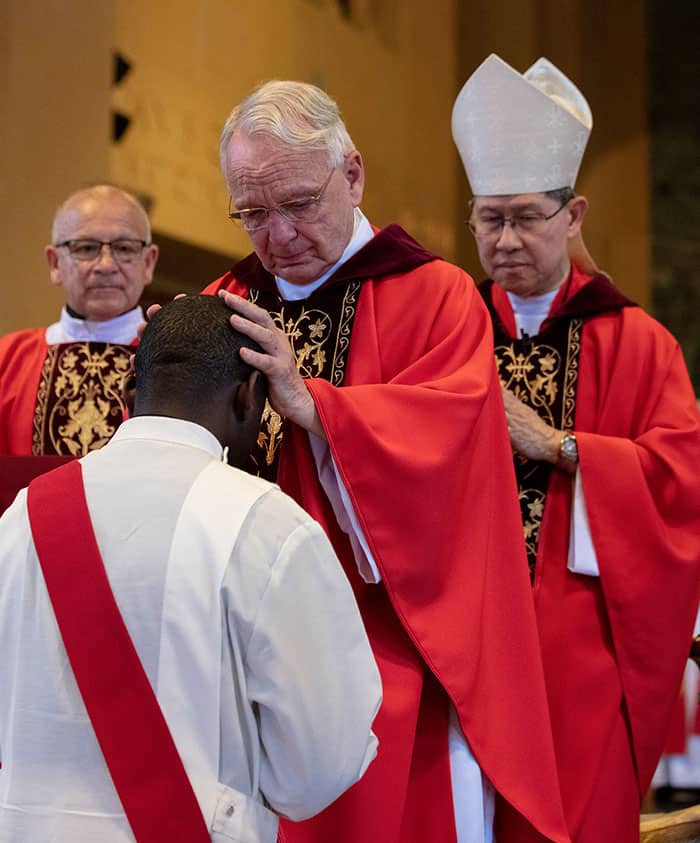 For Father Siyumbu, 36, the highlight during the ordination rite was when he lay prostrate before the altar. “I felt like Jesus Christ on the Cross. Time seemed to stop,” he said. “I felt the grace of God, the spirit of God poured out on me through the people around me, all my family, ancestors and friends.” He continued, “I felt a deep joy, and a closeness to everyone in the chapel, and also to all of those accompanying from Bolivia, Kenya, Tanzania, and the Americas and all the people who watched at me that moment. I felt a union with them. That will stay with me for the rest of my life.”

Cardinal Tagle, who is from the Philippines, remarked that the Church is made of brothers and sisters gathered in Christ as one community of faith. He reminded Father Siyumbu that the Holy Spirit gives different gifts to build up the human family in our diversity and to let creation sing in a symphony of joy. “I hope you as a collaborator of Jesus, the head of the Church, will be a sign and an instrument of this welcome of people of different nations, tongues, traditions, cultures, diverse gifts coming together for the common good,” he added. “Coming together to build up the one community, a Christian family, to strengthen the common home. That is the desire of Jesus and I hope wherever you are sent, you will be a living sign of the calling of Jesus to everyone; may they hear the voice of Jesus through you.” 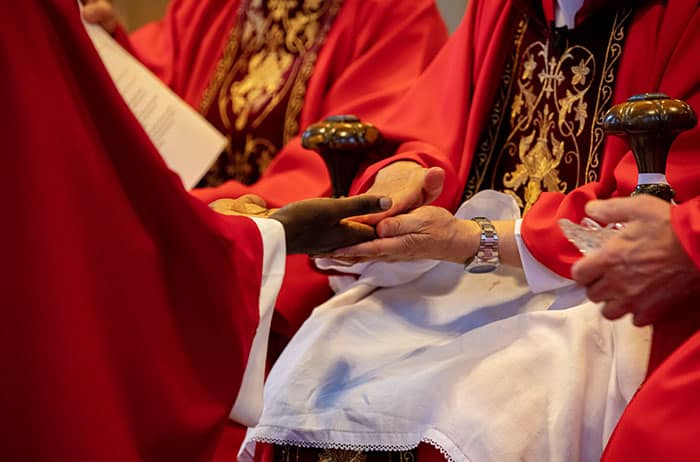 Allyson Brennan, the lector for the second reading, had become friends with Siyumbu when they both studied Spanish at the Maryknoll Mission Center in Cochabamba, Bolivia. She said she wished the newly ordained all the best. “There is no one better than him to pave the way. … So for him to be the first one from (East) Africa as a Maryknoll priest is a great example for people to come,” she said. “He has a big heart.”

Also present to congratulate the new priest was Siyumbu’s childhood friend Stephen Rotich, who now lives in North Carolina. Rotich was a classmate and close friend with young John at Mumias Primary School in Kenya. He said he remembers how growing up, everyone looked up to John for guidance because he was always doing the right thing. “You are going to serve well. You are a sign of hope for our community,” he said to his friend. “Just be strong like you have always been and bless our community.”

In a WhatsApp interview, Father Siyumbu’s mother, Eunice, his father, Michael, and sisters Nelly and Jessy mentioned that all his family members and representatives of small Christian communities watched the ordination. “I want to thank the celebrant of the Mass and all the Maryknollers for having prepared Father John. When Father Nadeau spoke in our languages it was emotional to us. He represented us as a family,” his mother said. “To choose this Feast Day of the Uganda Martyrs for the ordination of my son is very historical. I used to go on pilgrimage to visit the shrine in Uganda every June since 1998. It is a very special day for us.” 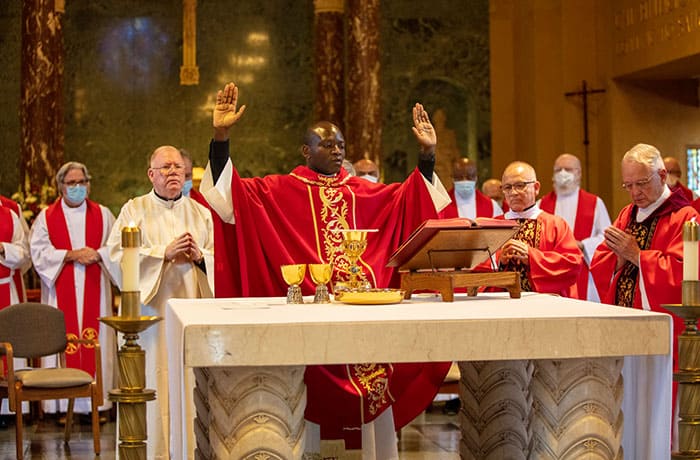 Maryknoll Father John Siyumbu concelebrates the Eucharist after being ordained by Cardinal Tagle on June 3, 2022 at Our Lady Queen of Apostles Chapel in Ossining, New York. Maryknoll priests, seen behind, join the celebrants on the altar. (Octavio Duran/U.S.)

Following the ordination Mass, Father Siyumbu used his gift in languages as he gave first blessings in English, Spanish and Swahili to Cardinal Tagle, Maryknoll missioners and guests. Among those blessed were Patrick and Karen Holland. “I felt overwhelmed with love and being part of this,” Patrick said. “He is a blessing from God. He will be a great role model for all to follow.”

Karen said they had first met Father Siyumbu when he came to their home for Thanksgiving with their daughter Grace, who met him through a Maryknoll lay missioner who served in Bolivia. Since his own family could not be present, Father Siyumbu had asked the Hollands to represent his parents in the celebration. “For us to be representing his family is an honor,” Karen said.

Later that day, Father Siyumbu and Maryknoll Sister Faithmary Munyeki received their mission crosses in a sending ceremony. Following Maryknoll custom, missioners already serving in a country or region addressed the new missioners, inviting them to join them. Sister Munyeki was called to serve in Brazil by Maryknoll Sister Anastasia Lee.

Father Siyumbu was called to serve in Latin America by Maryknoll Father Michael Briggs, assistant regional superior of Latin America. “We are very happy that he is coming to Latin America and of course he’s been in Bolivia, so he knows us and we know him. It is a happy day for us,” Father Briggs said. “He comes across as a person of faith, a person who wanted to be in mission and to be of service.”

“He is going to be an amazing priest no matter where he goes to serve,” Karen Holland said. 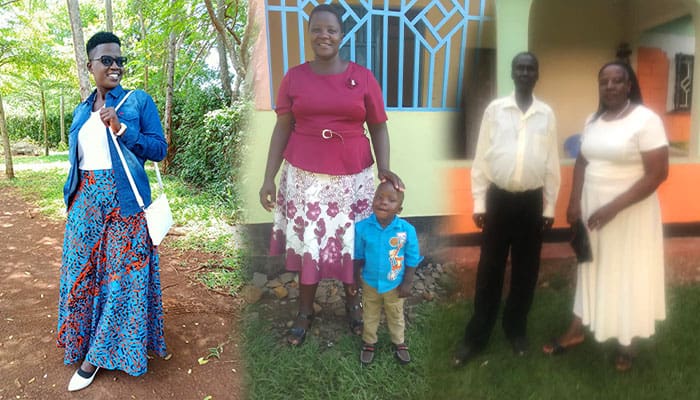