Hundreds gather in the Andean village of Accomarca to bury the remains of 50 victims of a massacre by Peruvian soldiers in 1985.

ACCOMARCA, Peru (CNS) — Hundreds of people gathered in this tiny Andean village for the burial of the remains of 50 victims of a brutal massacre committed by Peruvian soldiers in 1985.

For a day and a half before the May 20 funeral, relatives kept vigil around scores of ossuaries in the village church, where the pews and doors are inscribed with the names of the local Catholics who donated funds to rebuild it. The church had deteriorated after the massacre, as most of the remaining villagers fled.

Catholic rituals and symbols filled the houses and streets of Accomarca during the three days. Pedro Huamani Baldeon, 60, carried a handmade cross slightly more than two feet tall, on which he had painted flowers and the name of his mother, Maria Baldeon Rezza, one of the victims.

“I made it with all my love,” he said before going to find a priest to bless it with holy water.

The massacre was part of the military counterattack against the Maoist Shining Path, a terrorist group that launched its armed revolt against the Peruvian government in May 1980 in the highland region of Ayacucho, where Accomarca is located.

Between 1980 and 2000, the Shining Path and the Marxist Tupac Amaru Revolutionary Movement carried out armed actions against the Peruvian government. As in other parts of the world, the armed forces responded with a scorched-earth strategy that caught Indigenous peasants in the crossfire.

On Aug. 15, 1985, an army patrol entered Accomarca, a remote village of Quechua-speaking farmers two miles high in the Andes Mountains, which even now is 12 hours by bus from Lima, the Peruvian capital. Military officers believed some people from the community were planning to attack nearby areas where self-defense forces had killed terrorists several days earlier. 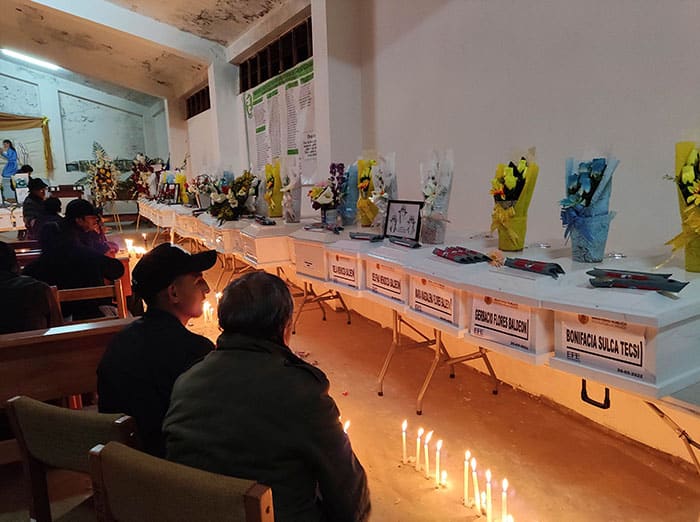 Relatives of victims of the 1985 massacre in Accomarca, Peru, keep vigil with the remains of their loved ones in the village church 18, 2022. (CNS photo/Jacqueline Fowks)

The soldiers rounded up the residents, tortured men and raped women, then forced them into two thatch-roofed adobe huts. They then set the huts ablaze while firing machine gun rounds into them.

Throughout the 1980s, the armed forces committed similar massacres in rural Quechua communities in the highlands. In an effort to eliminate some subversives, they killed entire neighborhoods, including children, elderly people and pregnant women. In Accomarca, 26 of the victims were children.

Of the nearly 70,000 people killed during the 20 years of political violence, 75% were Quechua-speaking farmers, according to the Truth and Reconciliation Commission that published a nine-volume report on the violence in 2003. The commission determined that the Shining Path was responsible for 54% of the deaths and the armed forces for 29%.

In most cases of human rights violations, the survivors fled, and their official complaints to authorities languished. In the case of Accomarca, however, several senators learned of the killings, traveled to the village a few days later and wrote a report.

After a court-martial, which failed to determine who was responsible for the massacre, a trial in a civilian court ended in 2016 with the conviction of 10 members of the military, only five of whom are in prison. One, Telmo Hurtado, a lieutenant who led anti-subversive patrols, was extradited from the United States in 2011.

Exhumation of the Accomarca victims began in 2006, but identification of the remains was held up by a lack of funding for the government’s forensic laboratory. Plans to return the victims’ remains to their families in March 2020 were derailed by the coronavirus pandemic. 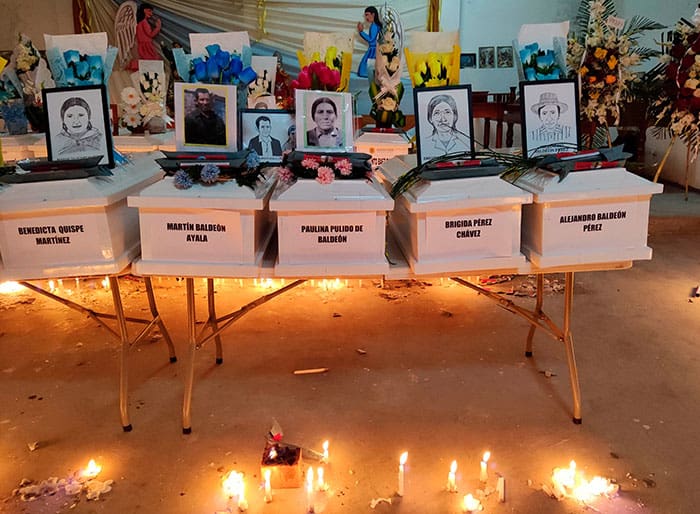 The remains of victims of a 1985 massacre in Accomarca, Peru, are seen during a vigil with their relatives in the village church May 18, 2022. (CNS photo/Jacqueline Fowks)

Because the bodies were badly charred, and because so many years have passed, experts were able to identify the remains of only 50 of the 70 victims. Government officials and representatives of the International Committee of the Red Cross made the symbolic return of dozens of others, represented by items of clothing they were wearing the day of the massacre, or by photos, drawings, letters or belongings.

Each ossuary was adorned with a silver cross. On the afternoon of May 18, they were carried to the church, which was filled with flowers — some real, some made of cloth — brought by relatives and a team from the Ministry of Justice.

Late that afternoon, villagers sang hymns in Quechua, and Brazilian Pallotine Father Marcone Castro, pastor of Our Lady of Carmel Parish in the town of Vilcas Huaman, said prayers. Father Castro drove 90 minutes over a dirt road from his parish to Accomarca.

On May 19, two women who had managed to hide on the day of the massacre, Teofila Ochoa and Cirila Pulido, led a pilgrimage to the ravine where the killings occurred. There, beside crosses bearing victims’ names, a local man sang a hymn in Quechua. Mayor Fernando Ochoa requested donations for the maintenance of the shrine, called the Llocllapampa ecological sanctuary, and some people who had been displaced by the violence contributed on the spot.

The night of May 19, the candlelit church was packed as Father Manuel Cardoso, also a Brazilian Pallottine, celebrated Mass. The pain felt by members of the Association of Victims of Accomarca, who recalled the cruelty with which their loved ones were murdered, was exacerbated by the fact that the community remains poor, without job opportunities, health services or even a paved road.

At the official ceremony May 20 marking the return of the remains, before the burial, various people spoke, including two Cabinet ministers, human rights activists, the local mayor, the Rev. Javier Pulido of Accomarca and Father Cardoso, who read the names of the victims as the funeral procession made its way to the grave site, just yards from the ruins of the former army base.

Featured image: Remains of victims of the 1985 massacre in Accomarca, Peru, are carried in procession to their final resting place above the village of Accomarca May 20, 2022. Hundreds of people gathered in the tiny Andean village for the burial of the remains of 50 victims of a brutal massacre committed by Peruvian soldiers in 1985. (CNS photo/Jacqueline Fowks)