This article is part of a series by UCA News titled  The Changing Face of Asian Mission. The series explores some mission areas in Asia, where Western missionaries once worked, to see how the local people have come of age to pastor their own people.

In the northern hills of Vietnam, Father Joseph Nguyen Tien Lien starts his day at 4 a.m. and finishes at midnight.

The 42-year-old was assigned to Mai Lien Parish in 2017, a year after he became a priest. He came to the hilly Mai Son district of Son La province as the first priest of the newly established parish in the Hung Hoa Diocese.

Evangelizing ethnic villagers “is my top priority. I want to bring God’s love to them so that they can enjoy divine mercy,” he says. Local priests like Father Lien manage the Catholic parishes and mission station in all 27 dioceses of Vietnam, where Spanish and Portuguese missionaries brought the faith in the 16th century.

The Catholic mission suffered because of a dearth of priests and infrastructure in some 10 dioceses in northern Vietnam, where communism forced Christians to flee during the Vietnam War (1954-75). However, native priests are now enthusiastically engaged in missions, particularly in the north.

Father Lien said ethnic villagers in Son La province “live in misery and suffer many difficulties” such as inadequate food and lack of facilities for education and health care.

Most ethnic groups have large families with several children and they traditionally cultivate crops such as rice and corn in the hilly tracts, lacking sufficient food throughout the year. The province is home to the Kinh majority and ethnic groups such as the Hmong, Dao, Muong, Thai, Tay and others.

The blood of missionaries

Father Lien pays regular pastoral visits to Hmong villagers. He has built 13 chapels in their villages and even helps repair homes damaged by natural disasters. A parish charity group also provides food at four public hospitals on a weekly basis.

“We try to give as much succor as we can to people in need, although we also live with limited means. We long to make contributions to social development,” Father Lien said.

The priest said he was elated at the results. “Over 700 people, most of them Hmong villagers, in this isolated rural area have embraced Catholicism during the past four years. Thank God.” The parish now has 1,600 members.

Father Lien holds summer catechism courses for the locals at his church. Some 100 Hmong villagers attended the one-month course last March. They were provided with food, accommodation and travel allowances.

Father Lien said he is inspired by foreign missioners who won ethnic groups’ hearts by living among them, adopting ethnic languages and cultures and looking after their material and spiritual needs. They paid pastoral visits to remote villages and fostered harmonious relationships with the villagers.

The first Catholic parish in the area was established in the 19th century when missionaries from the Society of Foreign Missions of Paris (MEP) started the Sapa parish in Lao Cai province. It initially aimed to provide pastoral care for French tourists and then included Hmong villagers, who lived in leaf houses, cultivated crops and raised animals for a living.

Five missionaries served the parish until 1948, when the last remaining priest was beheaded inside the church. 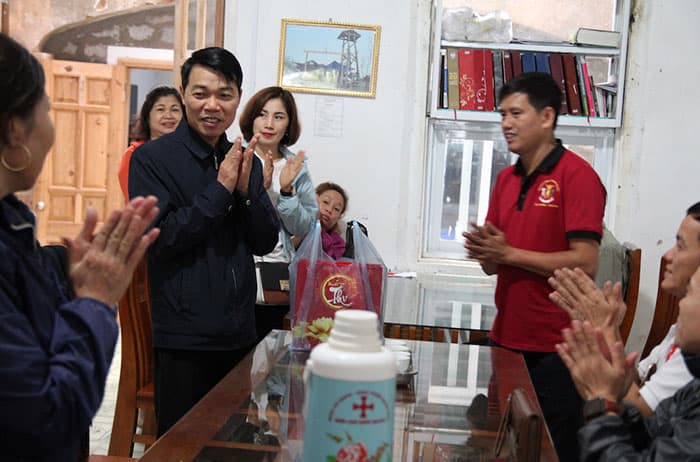 Post-war revival of the Catholic faith

Church facilities were destroyed in fierce battles between French troops and communist forces from 1946-54. Many Catholics moved to the south, while the rest suffered religious persecution and lived their faith secretly without priests for five decades. Church facilities were confiscated or ruined.

Father Binh was among the dozen native seminarians who were sent to study at formation houses in Ho Chi Minh City from 1992 to 1998. He was ordained eight years later, having overcome the obstacles caused by anti-religious government policies.

The local Catholics had scattered. They were not educated in the catechism and the infrastructure was in poor condition. “I studied the parish history and paid regular visits to ethic villages, learning their language, respecting their culture, and improving their material and spiritual life,” the 50-year-old priest recalled.

Kinh people mainly reside in the town and make a good living by providing services to tourists including running restaurants and hotels.

The Hmong lived in remote villages in the hills, far away from the church. They had large families and children left schools to support their families and marry early in their teens.

They live in poverty, lacking food, clothing and other basic needs to survive. They would borrow money from the priests to pay for medical emergencies.

The birth of MEP for Vietnam

The Sapa church has been a center of such activities. In front of the church on weekends, young couples in traditional attire would sing, play musical instruments and dance, drawing a significant number of domestic and foreign visitors interested in their ethnic traditions, customs, food and handmade products.

Father Binh, who is fluent in the Hmong language, said he set up a daycare center and a hostel to help ethnic students pursue their high school studies. This helped sow the seeds of vocations among the young people. The parish has produced a priest and two sisters who are ethnic Hmong.

Father Binh said it took the parish a decade to help families who lived in the church compound to move to other places. A new pastoral building was completed in early October to meet local people’s religious needs and provide accommodation for retired priests. He said Sapa district now is home to 4,300 Catholics out of a total population of 66,000 spread across four parishes and a dozen subparishes and mission stations. That’s more than 400 percent growth in 15 years. The district had only about 1,000 Catholics in 2006.

Catholic missionaries contributed to local culture and literature when they translated Bibles into Hmong and composed books of prayers in Hmong.

A Hmong Catholic from Phinh Ho Parish in Yen Bai province said baptized villagers looked after the church and gathered local people for daily prayers for decades without priests. They taught the Bible, hymns, prayers and catechism to others from other places. Those who finished courses returned to lead prayers in their villages.

As a result, the seeds of Catholicism have been transferred by ethnic generations, she said. Her Phinh Ho Parish had no priests until 2013, when priests from the Congregation of the Mission were sent to them. “We now try our best to preserve the faith heritage from foreign missioners and our ancestors despite grave difficulties,” she said. 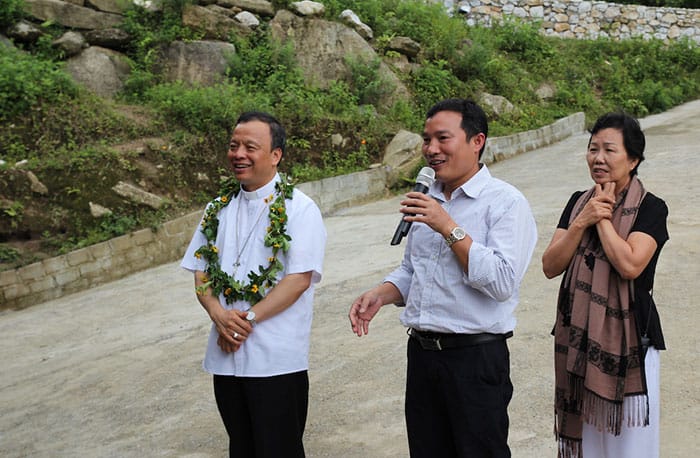 Father Peter Nguyen Truong Giang, who serves as deputy of the Ministry Committee for Ethnic Minorities in Hung Hoa Diocese, said that early this year a book of prayers was composed in the Hmong script.

Father Giang, who is fluent in the ethnic language, said some 90 priests, nuns, catechists and lay missioners from Lao Cai province were trained to read Hmong prayers and use it in liturgy. “We hope the new book will help Hmong Catholics to understand what they read and live out their faith,” he said.

Three northwestern provinces of Dien Bien, Lai Chau and Son La, which are home to two dozen ethnic groups, resumed religious activities in 2000s. They now have 12 parishes and tens of subparishes and mission stations with 15,000 Catholics. Several parishes such as his still await government approval. “We hope our parish will be recognized soon so that we have more favorable conditions to live our faith,” he said.

The 7 million Catholics in Vietnam form 7 percent of its population and they live spread across 2,228 parishes. Some 2,668 local priests like Father Lien take care of their pastoral needs.

In September, the northern Thai Binh Diocese announced it had government approval to establish a major seminary. It will have facilities to accommodate some 300 students.

The Church in Vietnam currently runs 11 major seminaries with 2,824 students from all its 27 dioceses. Each year, hundreds of new priests come out of these seminaries to assist missionaries like Father Lien who toil on the plains and hills of Vietnam.

As usual, Father Lien will start work tomorrow before sun rays hit the swirling fog on the hills of Son La province. He knows he is part of a mission that continues.

Featured image: Villagers in northern Vietnam in their traditional clothes attend the 125th anniversary of the establishment of Hung Hoa in the Bishop’s House in December 2020. (Photo: UCA News)