Roma refugees, who often do not have identity documents or passports, face discrimination as they seek safe haven in European countries.

Elzbieta Mirga-Wójtowicz told Avvenire, the daily newspaper of the Italian bishops’ conference, that a large number of Roma lack passports or identity certificates and “often they do not know where to go.”

“They are forced to set up camp and have become the target of neo-Nazi gangs recently. But the problem is many are stuck” inside welcoming centers that are meant to offer only temporary shelter and assistance, said Mirga-Wójtowicz, who promotes policies for protecting and integrating national and ethnic minorities, especially Roma, in Poland.

Poland has shown tremendous solidarity and generosity in welcoming more than 2 million refugees since the Russian invasion of Ukraine, she said in an interview published March 26. “Every day about 100 Roma arrive at the border from Ukraine” and this number is seen by some as “a problem.”

Joanna Talewicz-Kwiatkowska said life before the conflict already was difficult for the estimated 400,000 Roma in Ukraine, and now those tensions and prejudices have shifted to the border and the nations they flee to. There had been several attacks by mobs, often led by far-right groups, against Roma across Ukraine in recent years, she said. 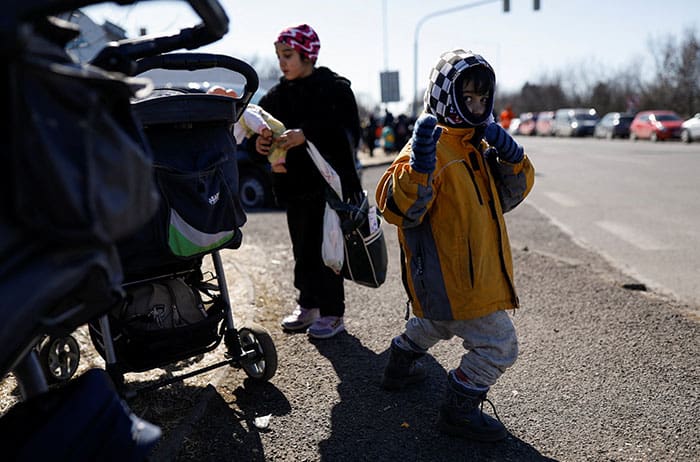 Roma children who fled Russia’s invasion of Ukraine wait for a bus in Vysne Nemecke, Slovakia, March 11, 2022. Human rights advocates have called on the United Nations and the European Union to work together to monitor and investigate reports of discrimination and rights violations against Roma and other minorities fleeing Ukraine. (CNS photo/Kamil Jasinski, Reuters)

Roma face racial stereotypes, xenophobia and hatred in many eastern European countries, she said, and when they seek shelter at refugee centers in Poland, “tensions immediately erupt when the other guests see them,” she said.

As a result, they are often housed in separate and undisclosed facilities, otherwise “they risk being attacked,” Talewicz-Kwiatkowska said.

Family ties are important for Roma communities so families can be large, including extended family members, and this makes finding housing or accommodation even more difficult, she said. When no one offers them more permanent shelter, “they are forced to stay at the centers.”

Talewicz-Kwiatkowska, who is of mixed Polish and Roma ancestry, told Avvenire that she was appealing to all Roma communities throughout the European Union to help each other. “Up to now we have organized bus transfers only to Sweden and Germany.”

The second appeal, she said, was to Polish authorities to launch a campaign against anti-Gypsyism, racism, xenophobia and hate speech.

Meanwhile, other human rights’ advocates called on the United Nations and the European Union to work together to monitor and investigate reports of discrimination and rights violations against Roma and other minorities fleeing Ukraine.

“We have been receiving increasing reports of allegations of discrimination against Roma, people of African descent, Asians and Arabs at the borders with Moldova, Hungary, Poland and the Czech Republic and we are currently working on putting in place reporting mechanisms and collection of evidence,” wrote Gabriela Hrabanova, director of the ERGO Network. 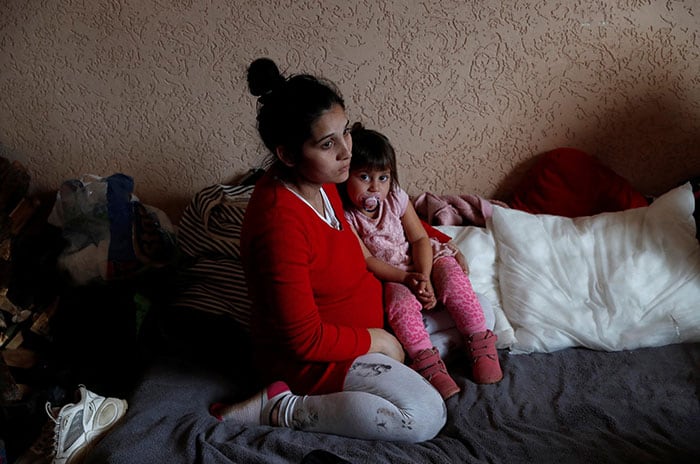 A mother who fled Russia’s invasion of Ukraine rests with her daughter at a local resident’s home, in Tiszabecs, Hungary, March 2, 2022. (CNS photo/Bernadett Szabo, Reuters)

“Foreigners, especially Roma, face discrimination in countries of transit or arrival. When Ukrainians of Slavic origin are welcomed by the population of countries they travel through or to, Roma are often denied access to transportation, accommodation and other assistance provided by volunteers, therefore, they have to rely only on state-supported assistance, which is limited and often is less accessible in remote areas,” she said in letters sent to the U.N. High Commissioner for Human Rights and key officials of the European Union March 8.

Based in Brussels, the ERGO Network mobilizes and connects organizations and individuals to empower Roma communities, combat anti-Gypsyism and establish needed national and European policies.

The network shared with the U.N. and EU a joint letter with more than 400 signatories, including members of the European Parliament and major organizations, calling for solidarity and immediate diplomatic solutions to the war.

“From the Second World War to the Balkan Wars of the late 1990s, history has shown us that in times of war or conflict, the plight of Roma as well as other minorities is continuously ignored. Ethnic minorities are often rendered invisible and further victimized instead of being provided equal protection,” the letter said.

They called on governments and entities to monitor and investigate human rights’ violations and provide equal access to aid for all marginalized and vulnerable people.

The letter also warned “media editors, journalists, and politicians to not monetize the war against Ukraine to promote inflammatory, racist portrayals of marginalized groups, including Roma.”

“Such stories only further stigmatize and victimize minorities and promote the risk of additional violence against these groups,” it said.