Europeans Turn Out to Transport, Welcome Refugees from Ukraine

A half a million refugees flee across borders into neighboring countries to escape Russian invasion of Ukraine.

BERLIN (CNS) — As half a million refugees crossed the borders into neighboring countries to flee the war in Ukraine, ordinary European citizens have turned out to welcome and help transport, feed and house them.

The main destination for many fleeing has been Poland, where many arrived in Medyka, the main road and rail border crossing from Ukraine.

After a 30-hour journey, Katerina Kosar told a Handelsblatt reporter: “I barely got out, but my family, friends and neighbors are stuck in bomb shelters.” She fled with her daughter, Diana, and the family pet. She said she left Kharkiv at 4 a.m. Feb. 24.

“My husband told me to go to Lviv for a few days for safety, as I am heavily pregnant,” she said. “An hour and a half later, the bombs started falling.” She later continued her journey to Posnan, where her uncle, who lives in Denmark, came to meet her.

Lviv is the largest city in Western Ukraine and, before 1939, was part of Poland. German newspapers reported that Polish volunteers have been driving all the way to Lviv to pick up Ukrainians and transport them into Poland. The last weekend in February, people waited an average of 24 hours at the border to cross into Poland.

Even before the Russian invasion began, officials estimated 1.5 million Ukrainians had left for Poland since 2014, when Russia annexed the Crimea.

Don Bosco International, which represents Salesian religious orders to European institutions, tweeted photos that showed Slovak Salesians had transported 50 children in a bus from a care center in Lviv, in collaboration with the Ukrainian police and Salesians in Ukraine. “They will be placed in Slovakian families.” 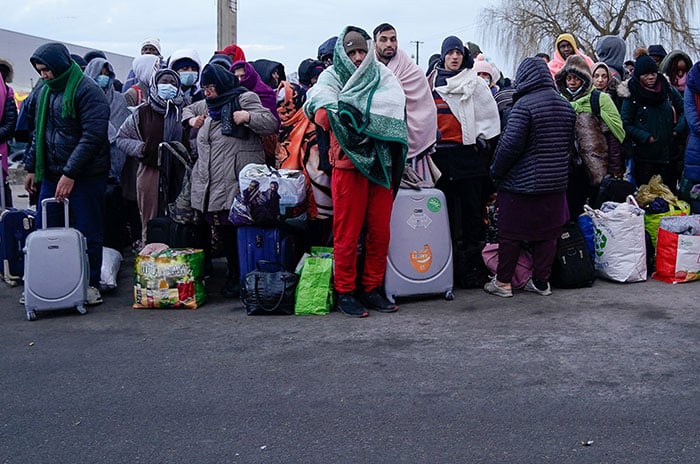 People who fled the Russian invasion in Ukraine wait to board a bus bound for a refugee center established in Medyka, Poland, Feb. 28, 2022. (CNS photo/Bryan Woolston, Reuters)

The Salesians are known for helping poor and troubled children, and another tweet said the bus that transported the children would return to Ukraine “with humanitarian help, donated by Don Bosco partners and families of Slovakia.”

On Feb. 26, the Polish State Railways announced that anyone with a Ukrainian passport could use the trains for free, and it was sending more trains to Przemysl and Medyka. The following day, Germany’s national railway announced that any Ukrainian refugee could travel for free.

“I’ve just dropped some people, and am now returning for another trip,” a volunteer who did not want his name mentioned texted Catholic News Service. Some of the volunteers are Russians based in Berlin, working alongside their Ukrainian and German friends.

Gernot Kraus of Caritas Internationalis said 34 of the agency’s 37 centers in Ukraine were still providing aid to people there, and the agency expects a million Ukrainians to cross into Poland alone.

On Feb. 28, Caritas in the Archdiocese of Berlin said it was creating structures to coordinate all the offers of aid, because expect an influx of refugees in early March.

Refugees, students and foreign workers also were affected by the Russian invasion.

Last August, Ukraine was one of the countries that evacuated refugees from Afghanistan. On Feb. 28, a former Afghan refugee in Berlin told CNS: “Many of them don’t even have enough money for food, let alone a trip to the neighboring countries.”

Sahraa Karimi, the former head of the Afghan Film Commission, was flown to Ukraine with some relatives last August; she later found work teaching at a film school in Rome. 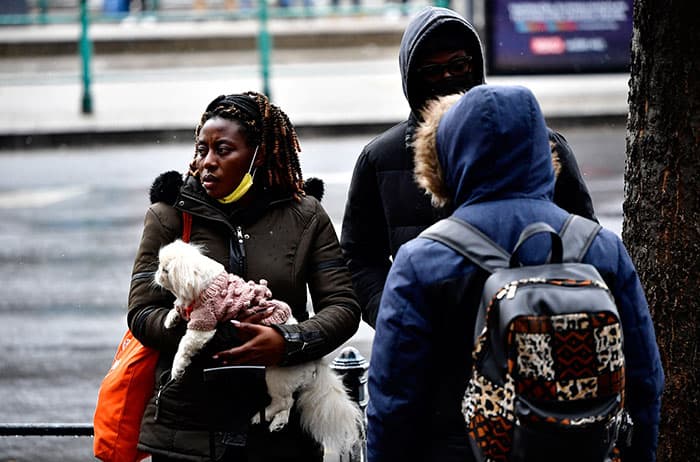 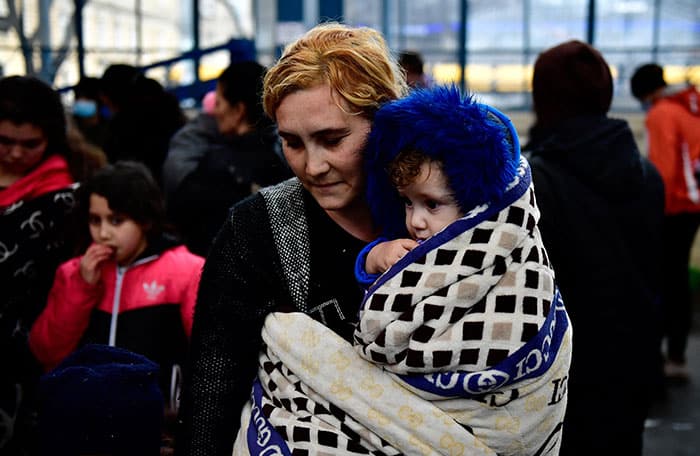 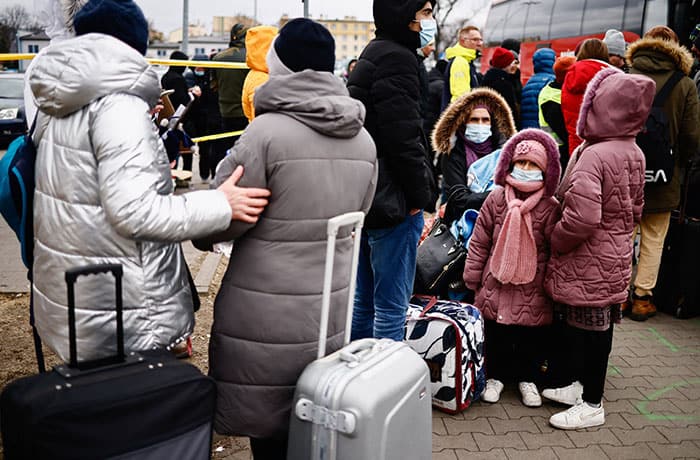 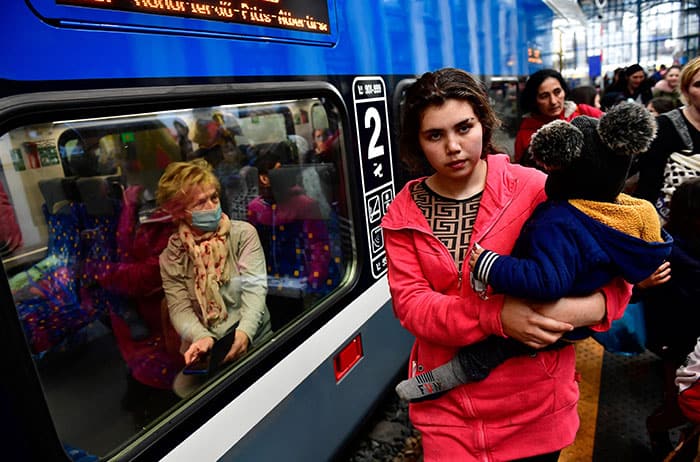 On Feb. 26, she tweeted frantically that she had been unable to reach her relatives for hours: “I am like a human being whose whole world is ruined. I’m heading to the Slovak-Ukrainian border. And I carry a bag of fear and anxiety with me. Help me Lord!”

Later that day, she was reunited with her relatives in Slovakia, while on the same day in Kabul, Afghanistan, the Taliban raided her apartment.

On social media, some African students spoke of experiencing racism at border crossings from Ukraine into Poland and Romania.

Vukile Dlamini, a South African student studying in Ukraine, wrote on Twitter that a group of African students traveled to the Romanian border after driving for hours and walking more than 12 miles.

She wrote: “We got to the border and it was chaos! We still stood and fought for over 5 hours. That is where all the traumatic and barbaric scenes occurred. There were two gates, one for Ukrainians and one for foreigners (Southern Africans, Indians, Nigerians, Ghanaians, Arabs, etc. just to name a few) coming from cities all over Ukraine.” She accused the guards of racism and said there was a lot of shuffling and pushing, with some people lightly injured.

“We are still traumatized, physiologically, emotionally and physically. We have, finally, crossed over the Romanian border, but it was very traumatic! “

“God is our strength because our human strength alone would not be able to carry us through. We are praying that all foreigners will make it to their homes safe. These days have been the longest days of our lives. War is real and war is ugly.”

Another African identifying himself as a Nigerian wrote on Twitter: “At the Poland border, everything seems normal, but earlier, the Ukraine officials at the border denied Africans and Indians entry and told us to return and go to Romania border, since Romania is accepting refugees too; until Nigerians started shouting racism, (then) they had to rethink.”

Featured image: In Europe, Ukraine is second in geographic size to Russia. With a population of about 43 million, it is the seventh-most populous European country. (CNS graphic/Todd Habiger, The Leaven)