Horror of War ‘Lodges in Your Gut’ When Recounted by Refugees, Cardinal Says

Canadian Cardinal Michael Czerny, on mission from the Vatican, meets victims of the invasion of Ukraine to show pope’s support for those fleeing war.

VATICAN CITY (CNS) — Following news reports about the war in Ukraine is important, Cardinal Michael Czerny said, but meeting the victims of that war — the people forced to flee — has a different impact.

“The impact on your eyes when you see (through the media) the bombing and the destruction and the blood and all that” is one of outrage, he told Catholic News Service. But “when you meet people who are fleeing and who have left everything behind, the impact is on the gut” and triggers compassion.

Pope Francis sent Cardinal Czerny, interim president of the Dicastery for Promoting Integral Human Development, to the Hungarian-Ukrainian border in early March to show his closeness to the victims of the war and his appreciation for those helping them.

Speaking to CNS by phone from Budapest, Hungary, March 10, the cardinal said he met a woman from rural Ukraine who was forced to flee, leaving behind all her animals. “I’m not saying she was weeping for her animals, but this has been her life and the life of her family for generations. And now, suddenly, she’s uprooted from that, and she has absolutely nothing.”

The look in her eyes and the sorrow in her voice “lodges in your gut in a physical way,” the cardinal said. 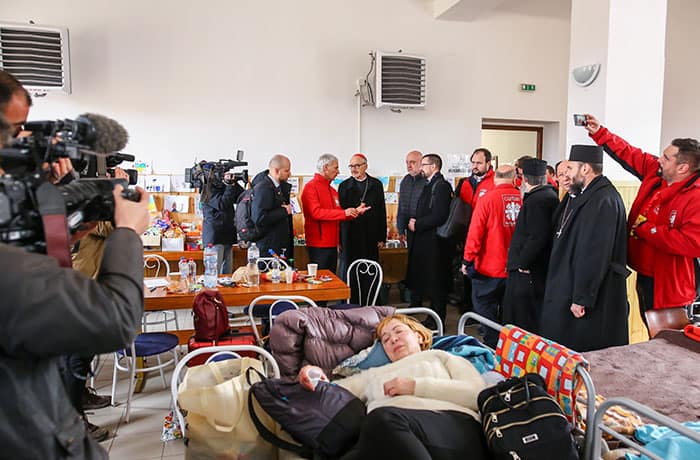 Canadian Cardinal Michael Czerny, interim president of the Dicastery for Promoting Integral Human Development, visits Ukrainian refugees in Barabás, Hungary, March 9, 2022. Cardinal Czerny, serving as special envoy for Pope Francis, visited refugees who are being helped by Caritas and other charities in the town near the Ukrainian border. (CNS photo/courtesy Lambert Attila/Magyar Kurír)

After spending a few hours in Barabás, a border town where the Hungarian government, Caritas Hungary and other charities welcome refugees, Cardinal Czerny was driven across the border to Beregove, Ukraine, to meet with the local Eastern- and Latin-rite Catholic bishops.

What he found instead were the bishops along with representatives of the local Protestant and Jewish communities — all of whom were working together to assist the displaced.

“It was a happy surprise,” he said. “It seemed to be the most natural and normal and necessary thing to do.”

But another evil lurks in the darkness of war, the cardinal said: the danger of human trafficking.

Even if they wanted to, men of fighting age are not allowed to leave Ukraine, so the refugees are mostly women fleeing with their children.

“This is exactly when trafficking goes into high gear, because they have such a large, vulnerable population of young women, young children,” he said. “A stranger comes up to you when you are in total need and says, ‘Do you want help?’ and you innocently say yes,” and the consequences can be devastating. 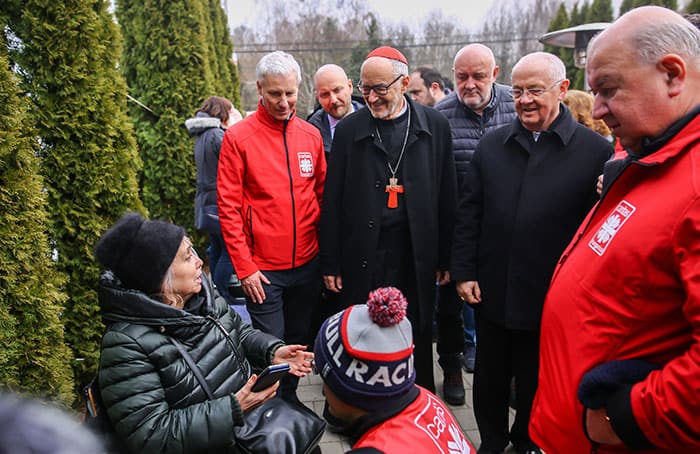 Canadian Cardinal Michael Czerny, interim president of the Dicastery for Promoting Integral Human Development, visits Ukrainian refugees in Barabás, Hungary, March 9, 2022. Cardinal Czerny, serving as special envoy for Pope Francis, visited refugees who are being helped by Caritas and other charities in the town near the Ukrainian border. (CNS photo/courtesy Lambert Attila/Magyar Kurír)

One thing the cardinal said he tried to do on his trip is educate the local church representatives and volunteers to the danger and how to help.

More than 2.3 million people fled Ukraine since the war began Feb. 24, according to figures compiled March 9 by the U.N. Refugee Agency. More than 200,000 of the refugees — Ukrainians as well as foreign students and workers from Africa and Asia — crossed the border into Hungary.

The rapid organization of assistance, he said, is thanks to the Hungarian government, working with Caritas Hungary and other organizations and hundreds of volunteers.

“The church people are able to not only distribute sandwiches and cups of tea, but also to point people toward whatever support or services they need,” he said. For example, the government has provided transportation passes, so the refugees can ride the buses and trains for free, including across Hungary to another border crossing where their relatives may be waiting for them.

Cardinal Czerny also had met March 9 with Zsolt Semjén, Hungary’s deputy prime minister, and encouraged the Hungarian government to continue to widen its assistance to refugees.

“For this to be a real grace,” the cardinal told CNS, “it must be prolonged in time and applied universally. There is no category of person for whom it is justified closing the door and saying, ‘You don’t deserve help.'”