El Salvador brings charges against a former president and 12 others in the murders of six Jesuits and two women in 1989.

MEXICO CITY (CNS) — Prosecutors in El Salvador have brought charges against a former president for the murders of six Jesuits in 1989, a crime carried out by soldiers during a brutal civil war in the Central American country.

Former President Alfredo Cristiani and 12 others — mostly former soldiers — were charged with involvement in the slayings of the six Jesuits, their housekeeper and the housekeeper’s teenage daughter at their residence on the campus of the Jesuit-run José Simeón Cañas Central American University in San Salvador.

Salvadoran Attorney General Rodolfo Delgado announced the charges Feb. 25, saying his office “is determined to bring to court those responsible for this unfortunate and tragic event that occurred during the armed conflict.”

He added that the attorney general’s office “is promoting the search for the truth, the search for justice, reparation for the victims and that these kinds of unfortunate actions will not be repeated.”

The charges against Cristiani and the other suspects apparently include murder, terrorism and conspiracy, according to The Associated Press. 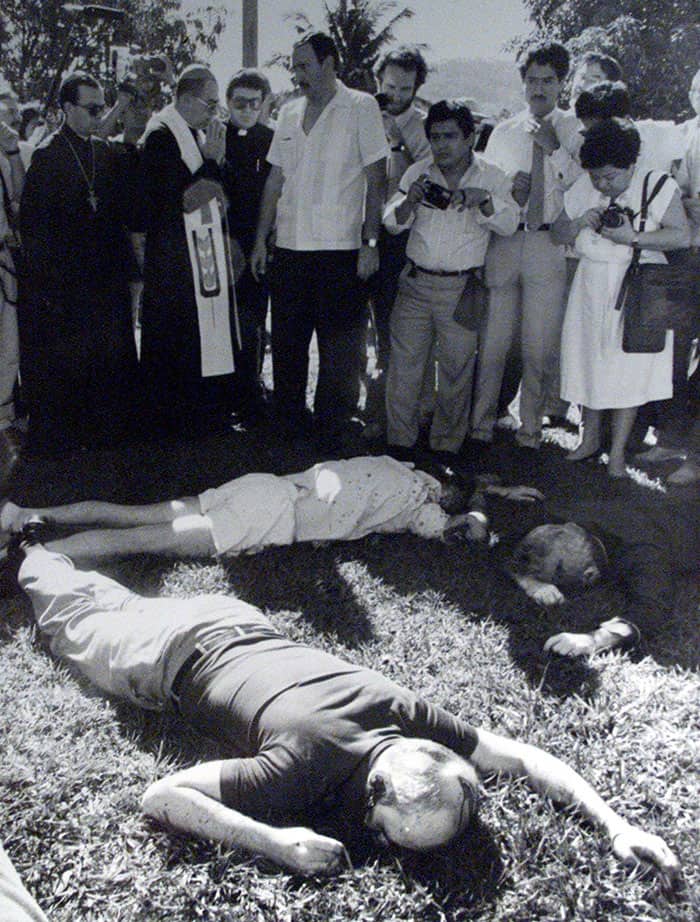 This file photo shows part of the scene where six Jesuit priests, their housekeeper and her daughter were assassinated Nov. 16, 1989, in San Salvador. (CNS photo/Reuters)

The charges against Cristiani and the other suspects apparently include murder, terrorism and conspiracy, according to The Associated Press.

Cristiani, who has a degree in business administration from Jesuit-run Georgetown University in Washington, D.C., has denied any involvement in the Nov. 16, 1989, murders of the Jesuits. He served as president from 1989 to 1994.

Attempts at obtaining justice in El Salvador for the case of the slain Jesuits have proven impossible at times. But in January, the country’s supreme court ordered a reopening of the case into the slayings, ruling favorably on a petition from the attorney general.

Two former soldiers were convicted in 1993 for their roles in the crimes, but were subsequently released after an amnesty was approved later that year. One of the soldiers, Col. Guillermo Benavides, was reincarcerated in 2016 after the amnesty was declared unconstitutional.

Another former soldier, Col. Inocente Orlando Montano, was convicted by a Spanish court in 2020 for five of the murders — five of the Jesuits were Spaniards — and sentenced to 133 years and four months in prison. The court called the crime an act of “state terrorism,” in which the top military leadership and then-president participated.

Almudena Bernabeu, the lead prosecutor who pursued the case for 12 years, told Catholic News Service after the trial that Cristiani “was actively protecting the soldiers and covering up evidence.”

Jesuit Father Andreu Oliva, rector of Central American University, told the media outlet El Faro in February: “The participation of former President Cristiani, like that of the rest of the defendants, must be clarified in the judicial process in El Salvador.”

He added that the university “is interested in knowing the truth, in a trial carried out with all the guarantees of due process, no matter who turns out to be responsible” for the crimes.

Featured image: Students hold a portrait of Jesuit Father Ignacio Ellacuria Nov. 11, 2017, at Central American University in San Salvador, El Salvador, prior to a procession commemorating the 28th anniversary of the murder of six Jesuit priests and two employees killed in 1989 during the Salvadoran civil war. (CNS photo/Jose Cabezas, Reuters)