A former Maryknoll priest associate recalls the night they killed the Jesuits.

William Schmidt, a former Maryknoll priest associate, served as a pastor in the Zacamil neighborhood of San Salvador, El Salvador, at the height of the country’s civil war. He recalls those harrowing days when many of his parishioners were forced from their homes and government soldiers murdered six Jesuit priests and two women at the University of Central America (UCA) in San Salvador.

Wednesday, Nov. 15, 1989, was a clear, cool night in Zacamil. Flares lit the sky. Their flickering light revealed bodies strewn about the rubble and trash scattered in the streets.

“Communists and traitors!” shouted the army commander through a megaphone “Leave the area while you still have time!”

The tattered remnant of our community huddled around a fire. Men, women and children grabbed what they could to flee.

We hurried toward the line of demarcation. An old woman led us. She waved a white sheet to beg safe passage. I held aloft an image of St. Simon, patron saint of this displaced multitude. Salvadoran guerrilla fighters—kids mostly—trained their weapons on the advancing soldiers.

We passed an army checkpoint. A nervous teenaged recruit trained his M-16 on me.

“What are you doing here?” he barked.

An older officer came up. He pointed the recruit’s gun toward the ground.

“Who are you?” the officer demanded.

“I am the pastor of Cristo Salvador (Christ the Savior parish) of Zacamil,” I said.

Nearby, an elderly couple peered through their front gate.

The officer saw them.

“No,” they said, and quickly disappeared.

The officer focused again on me.

“There are foreigners embedded with the terrorists,” he said, eyeing me suspiciously.

He looked me over from head to toe, then grimaced.

I tucked St. Simon under my arm and sprinted down the street known as El Toboggan. As I ran, a bullet whizzed past my ear.

Our parishioners huddled together, seeking refuge near a school by a park called El Satellite.

As people spoke in hushed tones, I dozed in and out of a hazy slumber.

Around 3 a.m., I heard someone whisper, “Mataron a los Jesuitas” (“They killed the Jesuits.”) 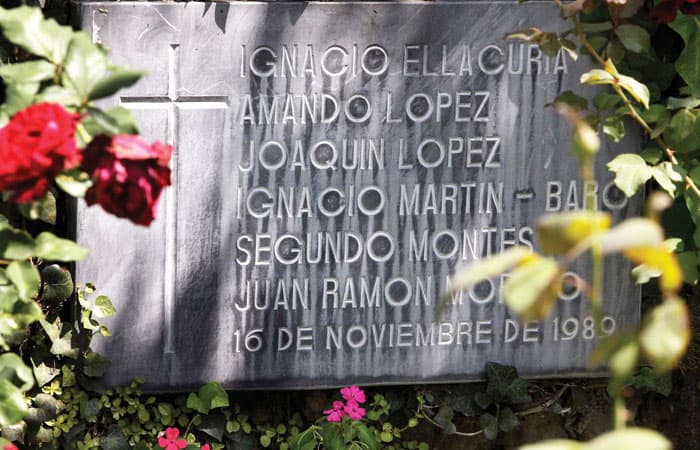 Stone with the names of six slain Jesuits marks the spot where they were killed by government soldiers in the midst of the 12-year Salvadoran civil war. (John Spain/El Salvador)

There were those in the U.S. government and even the Catholic Church who shared a common suspicion that the Basic Christian Communities of El Salvador served as incubators to foster communism and socialism.

The Basic Christian Communities did challenge the status quo. But the Salvadoran army and national guard, armed, trained and financed by the United States, murdered the UCA Jesuit priests in cold blood—along with their housekeeper Elba, her daughter and hundreds in our community in a war that eventually took 75,000 lives.

My spiritual director, Jesuit Father Juan Moreno, was dragged from his bed at the Jesuit’s UCA campus residence and murdered along with his confreres in the middle of the night. Proud Iberian Spaniards, they renounced their citizenship as missionary sons of St. Ignatius to immerse themselves as Salvadoran nationals.

Padre Juan had advised me: “Have patience, Bill. Maintain a sense of humor.”

“God is the God of history,” he assured me. “Sooner or later, truth will prevail and He shall overcome.”

We Catholics profess belief in the “Real Presence” of Christ in the Eucharist: Body and Blood, Soul and Divinity. We believe the Risen Christ is present under the form of bread and wine, in the Word proclaimed in the midst of the assembly and in all who gather there in Jesus’ name. As St. Augustine preached: “Be what you see and become what you have received: The Body and Blood of Christ.”

We strive not to fear death, because we have already died to Christ in baptism.

We proclaim that we are surrounded by a “great cloud of witnesses,” the saints and martyrs and all people of good will who have gone before us marked with the sign of faith.

Yet how is faith to be measured or accounted for? What do my beliefs cost me?

Does my silence engender complicity with those who lie, who ignore Christ present in children caged at our borders, trapped in compartments in trucks or container ships or washed ashore as drowned corpses on remote islands?

“You absolutely owe it to Christ not to be afraid of anything” said Charles de Foucauld, the Trappist monk who retired to the desert and established the Little Brothers of Jesus. He met his death in the sands of North Africa as a witness in the root sense of the term “martyr,” who paid dearly for his vision and his convictions.

“Blessed are those who dream dreams and are willing to pay the price to make them come true,” said Cardinal Leon-Josef Suenens of Belgium, a guiding light at Vatican II and trusted collaborator of Pope Saints John XXIII and Paul VI.

May we continue to dream dreams and sacrifice to make them come true.

William J. Schmidt is a former Maryknoll priest associate who served in El Salvador during that country’s civil war, which lasted from 1980 to 1992.