WASHINGTON (CNS) — For most migrants and their supporters, 2021 looks as if it will end much like it started.

With the most recent blow by the Senate parliamentarian’s ruling that immigration reform must be excluded from the president’s proposed social safety-net bill to courts keeping in place a program preventing asylum-seeking migrants from entering the country, the year has ended in much frustration on the immigration front.

There had been much hope and optimism among immigration supporters early on that President Joe Biden would do away in 2021 with some of the more controversial practices the Trump administration had instituted.

Almost immediately after he was sworn in Jan. 20, Biden announced he was pausing most deportations during his first 100 days in office. He also paused a policy that kept asylum-seeking migrants in Mexico until their cases could be heard in U.S. immigration courts. He also said he would be aggressively pursuing a way to legalize as many as he could of the 11 million people who are in the country without legal permission.

Catholic organizations that had been against the restrictive measures and held little hope for reform during the Trump administration praised the new president, who had also involved them in talks with his transition team as to how to move forward.

But what had seemed to be winds of change quickly died down.

As migrants began heading in greater numbers toward the southern border early in the year, perhaps encouraged by what had initially seemed to be a friendlier environment, administration officials began a message that sounded like the continuation of President Donald Trump’s immigration policies.

It was followed by a similar message from Kamala Harris during her first official trip as vice president to Guatemala and Mexico.

“Do not come. Do not come,” Harris said June 7 in a message in Central America. “The United States will continue to enforce our laws and secure our borders. If you come to our border, you will be turned back.” 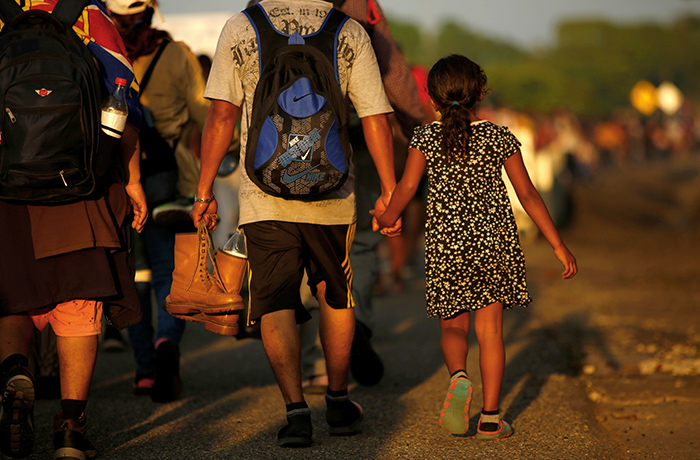 Jose Francisco from Honduras leads his 8-year-old daughter, Zuabelin, by the hand Nov. 22, 2021, as they took part in a caravan near Villa Mapastepec, Mexico, and headed to the U.S. border. (CNS photo/Jose Luis Gonzalez, Reuters)

Since then, there have been court battles over the administration’s efforts to do away with certain restrictions as well as mounting political obstacles blocking any chance at granting legal reprieve to those in the country illegally and those trying to enter.

The Migrant Protection Protocols, one of the policies the Biden administration tried to do away with — often referred to as “Remain in Mexico” because it keeps asylum- seekers on the other side of the border — has recently been restarted.

Though the government ended it, it was forced to implement it again in early December after a court said Biden administration officials had not ended it properly. The Supreme Court agreed. On Dec. 13, the 5th U.S. Circuit Court of Appeals shut down the latest appeal by the Biden administration to end it.

And though immigration advocates had seen a ray of hope for reform built into Biden’s ambitious Build Back Better legislation, the Senate parliamentarian, a nonpartisan interpreter of standing rules of how a provision can be used in Senate legislation, dealt the latest blow to the plan Dec. 16.

Democrats had hoped to include immigration reform provisions in the budget reconciliation bill process. Though the provisions would have stopped short of granting permanent residency, a step before citizenship, they would have allowed temporary work permits for almost 7 million people who are in the country without legal permission, prevented them from being deported and allowed them to travel.

But the parliamentarian said what Democrats submitted was not much different from other proposals she had previously rejected.

“These are substantial policy changes with lasting effects just like those we previously considered and outweigh the budgetary impact,” wrote Elizabeth MacDonough, explaining the latest ruling against the plan.

A chorus of immigration supporters that once carefully measured words of disappointment against an administration that many called an “ally” have taken to publicly criticize what some now see as a continuation of former president Trump’s policies, this time by Biden officials.

In early December, more than 80 Catholic women religious marched outside the White House protesting the continuation of the immigration restrictions as the president’s motorcade passed nearby.

“As justice seekers, as Americans, but especially as Catholics, we are ashamed that President Biden has locked the door at our southern border to our immigrant siblings,” said Ronnate Asirwatham, government relations director of the Catholic social justice lobby Network, who had joined the women religious Dec. 3 in their demonstration.

In October, immigrant advocates walked away from an online meeting with Biden administration officials to let their discontent be known about the decision to restart the Remain in Mexico policy. 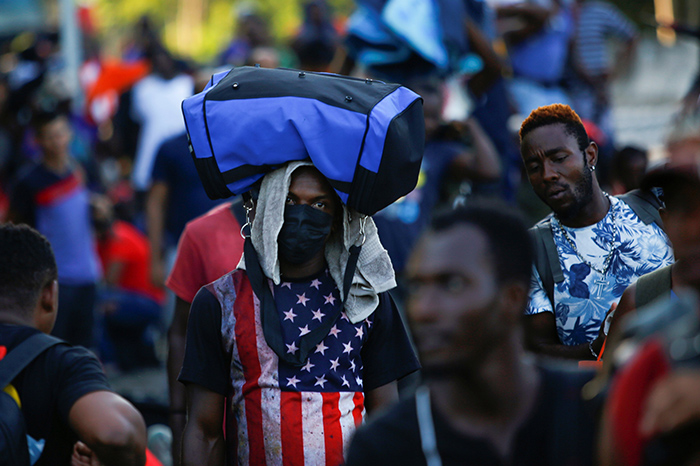 They also criticized and expressed outrage at the treatment of Haitian migrants at the southern border in September, after videos circulated of border agents on horses trying to get a group of mostly Haitian immigrants to return to the Mexico side along a river.

Catholic immigrant advocates have used Advent as an occasion to call out the administration on its expulsions, particularly of Haitians, comparing those seeking entry into the U.S. to the Holy Family seeking safety.

“Yes, the increase of migrants present at the border is challenging. But the United States is not a small, helpless country. We can meet the challenges if we have the will,” she said.

But some wonder whether the administration has the political will to deal with a possible backlash that might result from immigration reform.

The Welcome With Dignity Campaign, a coalition that includes faith groups, previously said the government is playing politics with people’s lives. Some wonder whether Democrats and the administration worry about their chances of winning seats in the midterms next year if they seem too soft on immigration.

But Sen. Richard J. Durbin, a Democrat from Illinois, who has been working on the immigration reform plan, said the fight is not done yet. And he said the party would continue trying to find a road via the social spending bill.

“We will pursue every means to achieve a path to citizenship in the Build Back Better Act,” he said in a Dec. 17 news release.

But when Sen. Joe Manchin, D-W.Va., said Dec. 19 that he could not support the bill, even without immigration reform in it, chances of any action for 2021 dimmed.

The bipartisan American Business Immigration Coalition, in a Dec. 17 news release, urged Congress to do something quick, saying “labor shortages and rising costs to consumers in the current economy will only worsen unless immigration reforms are passed immediately.”

Bob Worsley, the organization’s co-chair and a former Republican state senator from Arizona, told the Democrats to “grow a spine and do this.”

“Disregard the parliamentarian and get this bill done. This is going to kill us in the real world, with inflation and a lack of workers in almost every field — in hospitality and health care — everywhere, we’re hurting for workers. They need to get this done,” he said.

But as 2021 comes to an end, only uncertainty looms on the horizon about what the new year will bring.

Featured image: Members of 24 congregations of women religious from around the country gather near the White House Dec. 3, 2021, to demonstrate against President Joe Biden’s continuation of Title 42 expulsions. Under Title 42, a provision of the U.S. public health law enforced by the Trump administration, asylum-seekers can be expelled from the U.S. because of concerns over COVID-19 infections. (CNS photo/Rhina Guidos)