For Migrants, Remain in Mexico Means Remain in Danger

Little Carlos, age 5, still wakes from sleep to ask his mother a troubling question: “Mommy, why did you pull me along the railroad tracks?” Fleeing violence in their home country of El Salvador, Marta and her son endured many perils to seek asylum in the United States. But arrival at the border did not end their journey.

Over two years later, Marta and Carlos (not their real names) find themselves stranded in Ciudad Juarez, Mexico, because of Migrant Protection Protocols (MPP). Commonly known as “Remain in Mexico,” the policy forces asylum seekers to wait in Mexico while pursuing their cases.

Although MPP had been lifted soon after President Biden came into office, a federal district judge in Texas ruled that the Biden Administration must reinstate MPP. After the Fifth Circuit denied Biden’s emergency appeal to stay the order, on August 24 the Supreme Court also declined to issue a stay.

“We are devastated,” wrote Maryknoll Lay Missioner Heidi Cerneka, who works as an immigration attorney in El Paso, Texas. 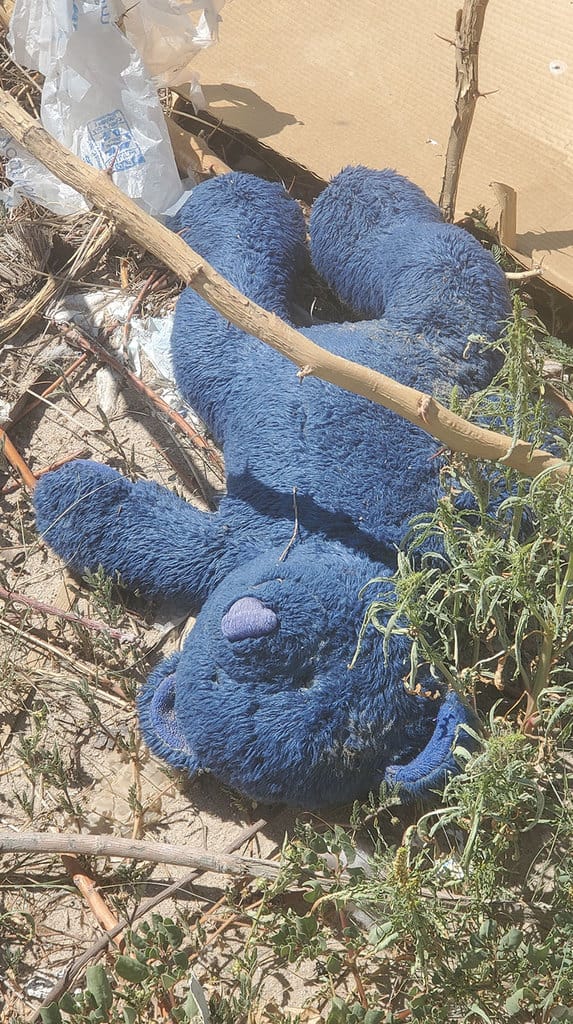 A child’s toy lies abandoned at the foot of the border wall at U.S.-Mexico border at El Paso, Texas-Ciudad Juarez, Chihuahua. Often, migrant children must leave behind the toy they traveled with as they attempt to cross the border. (Tammi Murray/Mexico)

“This horrific practice prevents people from exercising legitimate access to asylum,” she explained in a phone interview. “And it keeps them in extremely unsafe and precarious conditions.” Reinstatement of MPP means that other refugee families will end up in the same situation as Marta and Carlos.

Maryknoll participants in an immersion program of the Encuentro Project, a collaborative effort of religious organizations that promotes understanding of border issues, heard Marta’s story during a visit to Ciudad Juarez recently. In El Salvador, Marta’s husband, a police officer, had confronted a local gang. In retaliation, gang members threatened to kill his wife and 3-year-old son Carlos within the week. “My mother, my husband and I decided together that it was best for my son and me to leave the country,” Marta said. They scraped together payment for a coyote, and on June 1, 2019—just days after the confrontation—the mother and child left El Salvador.

They traveled mostly by bus in a group of about 25 people. From Mexico City to the U.S. border, Mexican soldiers stopped vehicles, looking for migrants headed north, Marta said. The group traveled at night. To avoid checkpoints, the migrants got off the bus and split into smaller groups, walking at a distance from the highway. Once they had passed the checkpoints, they met up again with the bus to continue their journey.

“It was a hard journey. At times we went hungry, and at night we felt cold,” Marta recalled, adding that during the day they experienced the desert heat. Walking, they followed the railroad tracks. “We were told to run very fast,” Marta said, but carrying Carlos slowed her down. Afraid to be separated from the group, she urged him to run, but he could not keep up. “I had to drag him along,” Marta remembered through tears. 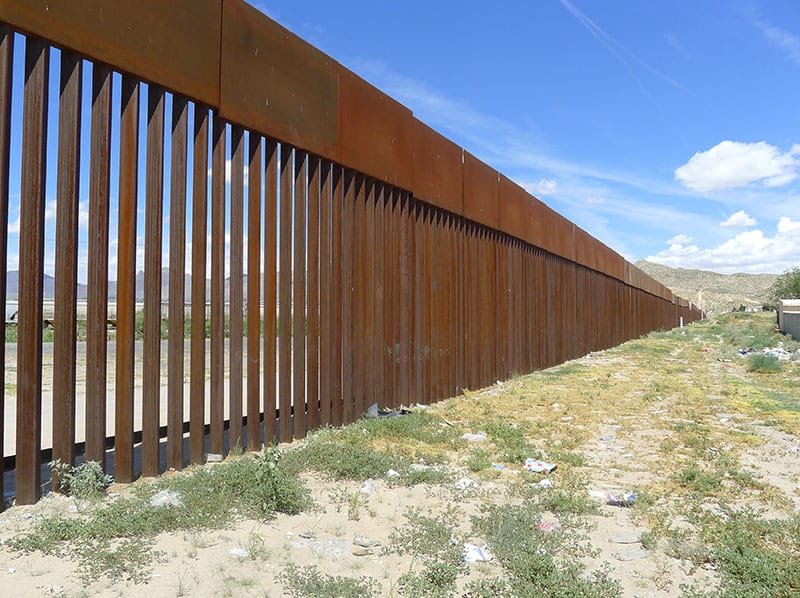 The border wall separating the United States from Mexico. Migrants must set foot on U.S. soil in order to plead asylum. MPP has made it significantly more difficult to win an asylum case, while at the same time, forcing refugees into perilous situations on the Mexican border. (Deirdre Cornell/Mexico)

On June 25, Marta and Carlos arrived at the border, hungry and exhausted. “We turned ourselves in,” she said. Marta made a plea for asylum, and Border Patrol agents took her and Carlos to a detention center. But on June 27, they were taken and dropped off by Immigration and Customs Enforcement on the streets of Ciudad Juarez in Mexico. Marta and Carlos were left in limbo as a result of “Remain in Mexico.” “Sadly, their story is one of many thousands of people in similar situations,” said Jesuit Father Rafael García, the Encuentro Project’s director.

Marta and Carlos are among 70,000 migrants returned to Mexico from January 2019 to December 2020. Mexican authorities and social service agencies scrambled to create shelters and services, but makeshift encampments arose along the border–often without water or electricity. Worse still, asylum seekers and families were preyed upon by crime rings. A statement from Las Americas Immigrant Advocacy Center tells of providing services for migrants during that time: “We can’t help but be flooded by the memories of the people we helped get out of MPP. … We remember countless parents who were raped, kidnapped and assaulted in front of their children.”

Marta and Carlos stayed at Casa del Migrante, a shelter run by the diocese of Ciudad Juarez. Although they were grateful to be kept safe, the experience of being homeless was humiliating. “Someone in Juarez told us we were starving dogs,” Marta recalled bitterly.

María Sajquim de Torres of Jesuit Refugee Services provides basic psychological and mental health support for migrants in shelters in El Paso and in Ciudad Juarez. Speaking to the Maryknoll group, she said she has seen “example after example of suffering caused by inhumane immigration policies. … Add to that extortion, kidnapping and violence, including sexual assault.” She noted, “Cruelty by policy exacerbates the suffering that caused refugees to flee their home countries in the first place.” 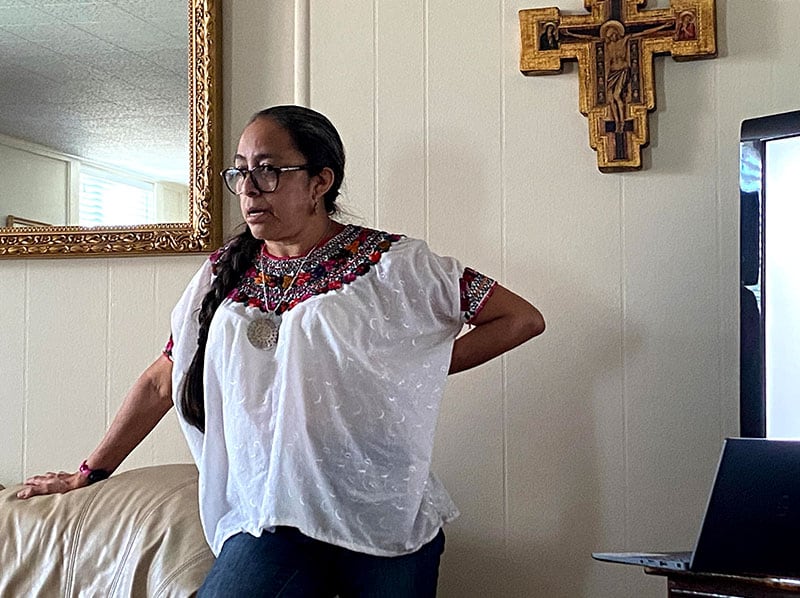 Sajquim de Torres said she often hears from migrants, “’I want someone to listen to me. And I want someone to believe me.’” According to the American Immigration Lawyers Association, “MPP made it far more difficult for asylum seekers to receive a fair and meaningful review of their claims.”

In August, Marta went to a court date in Texas, but she was turned back to Ciudad Juarez and had to return to the shelter. “My son cried. He missed his grandmother. He kept asking why we were here,” she said. She worried they would not be allowed to stay much longer at the shelter. Her next court date was scheduled several months into the future. Fortunately, a volunteer at the shelter who lived in Juarez invited Marta and Carlos to live in her home. Since then, Marta’s asylum case was denied. She is currently pursuing an appeal.

The Biden Administration is also pursuing its appeal for the stay of the MPP order. At question is whether the administration had terminated the policy in an improper manner; the next steps will be played out in court. Meanwhile, at the border, most refugees seeking asylum will be turned back to Mexico under MPP. Unlike Marta and Carlos, not many will be fortunate enough to find host families.

“Ciudad Juárez again braces itself to try to offer some kind of humanitarian support for desperate migrants,” Cerneka said.

Marta does her part, helping church volunteers prepare food and hygiene packages to hand out at the shelters. “I am helping others, as others helped me,” she explained.

Featured image: Marta and Carlos (not their real names), who were stranded in Ciudad Juarez due to Migrant Protection Protocols (MPP), pray in the home of a family that has given them hospitality. From January 2019 to December 2020, MPP, also known as “Remain in Mexico” sent 70,000 migrants to Mexico while their asylum cases were being processed in the United States. (Tracy McNulty /Mexico)