Continuing a papal tradition, Pope Francis visits a statue of the Immaculate Conception in Rome early in the morning on Dec. 8, and prays for the sick and suffering.

ROME (CNS) — An hour before sunrise, Pope Francis set a basket of white roses at the base of a statue of the Immaculate Conception in the center of Rome, praying Mary would help all who suffer.

“While it was still night,” the Vatican press office said Dec. 8, the pope prayed to Mary, “asking her for the miracle of a cure for the many people who are sick, for healing for people who are suffering so much because of wars and the climate crisis, and for conversion so that she would melt the stony hearts of those who build walls to keep the pain of others away.”

The pope arrived at Piazza di Spagna, near the Spanish Steps, at about 6:15 a.m., the press office said. Because of the ongoing COVID-19 pandemic, it was the second year in a row that the pope made an unannounced, early morning visit to the statue to avoid drawing a crowd. 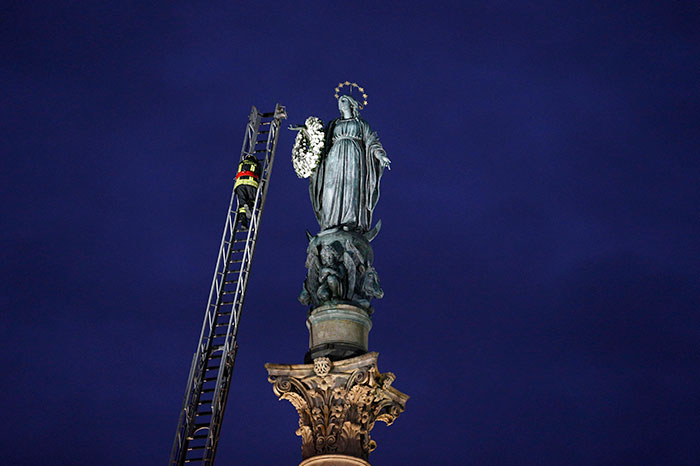 A firefighter descends a ladder after placing a wreath on a tall Marian statue overlooking the Spanish Steps in Rome Dec. 8, 2021, the feast of the Immaculate Conception. Pope Francis prayed at the statue before daybreak, continuing the papal tradition of visiting the Spanish Steps on the feast of the Immaculate Conception. (CNS photo/Paul Haring)

Pope Francis arrived, prayed and was gone even before a brigade of Rome firefighters had arrived to hang a wreath of flowers from the statue’s outstretched arms.

The feast of the Immaculate Conception is a public holiday in Rome, and the pope’s usual late afternoon visit to the Spanish Steps normally draws thousands of people.

Before returning to the Vatican, the pope also stopped at the Basilica of St. Mary Major to pray, the Vatican said.

At noon, Pope Francis led the recitation of the Angelus prayer with visitors in St. Peter’s Square and spoke about Mary’s humility and the miracles God accomplishes through people who rely totally on him.

The Gospel reading for the feast is St. Luke’s account of the Angel Gabriel appearing to Mary and telling her she would be the mother of Jesus. 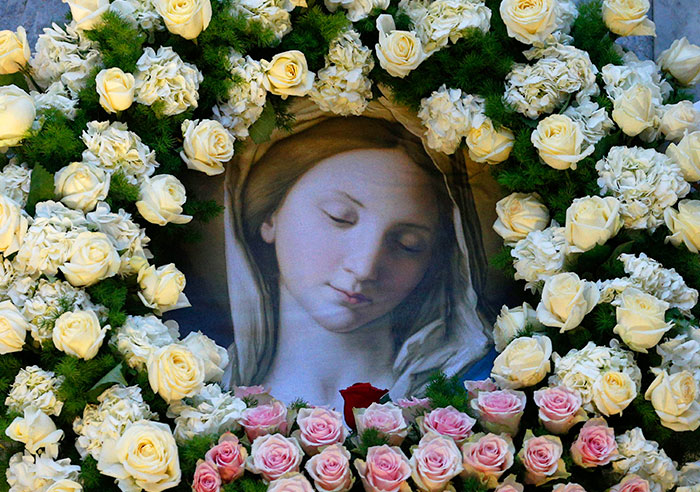 Flowers surround an image of Mary at the base of a tall Marian statue overlooking the Spanish Steps in Rome Dec. 8, 2021, the feast of the Immaculate Conception. Pope Francis prayed at the statue before daybreak, continuing the papal tradition of visiting the Spanish Steps on the feast of the Immaculate Conception. (CNS photo/Paul Haring)

“The angel calls her ‘full of grace,'” the pope noted. “If she is full of grace, it means the Madonna is void of evil: She is without sin, immaculate.”

Pope Francis noted how instead of saying Mary was surprised by the angel’s greeting, she was “greatly troubled.”

“Mary does not credit prerogatives to herself, she does not hold claim to anything, she accounts nothing to her own merit,” the pope said. “She is not self-satisfied, she does not exalt herself. For in her humility, she knows she receives everything from God.”

“Mary Immaculate does not look on herself,” he said. “This is true humility: not looking on oneself but looking toward God and others.”

Pope Francis prayed that Mary would help all Christians understand that if they are humble and focused on God and on serving others, God can accomplish great things through them.

“May she enkindle enthusiasm in us for the ideal of sanctity which has nothing to do with holy cards and pictures but is about living humbly and joyfully what happens each day, freed from ourselves, with our eyes fixed on God and the neighbor we meet,” he said.