Catholics have a responsibility to help those displaced by climate change, pope says.

VATICAN CITY (CNS) — Whether people admit it or not, climate change and environmental destruction are forcing millions from their homes, and Catholics have a responsibility to assist them, Pope Francis wrote in the preface to a new document.

“When people are driven out because their local environment has become uninhabitable, it might look like a process of nature, something inevitable,” the pope wrote. “Yet the deteriorating climate is very often the result of poor choices and destructive activity, of selfishness and neglect, that set humankind at odds with creation, our common home.”

The papal preface appears in “Pastoral Orientations on Climate Displaced People,” a document released March 30 by the Migrants and Refugees Section of the Dicastery for Promoting Integral Human Development.

In addition to offering parishes, dioceses and national bishops’ conferences suggestions for offering pastoral care to people forced to move because of rising sea levels, desertification and increasingly strong storms, the document encourages Catholics to study and track climate change and to change their lifestyles to help mitigate some of its effects.

“The climate crisis has been unfolding since the Industrial Revolution,” Pope Francis wrote. “For a long time, it developed so slowly that it remained imperceptible except to a very few clairvoyants.”

“Even now it is uneven in its impact: climate change happens everywhere, but the greatest pain is felt by those who have contributed the least to it,” the pope wrote. “The huge and increasing numbers (of people) displaced by climate crises are fast becoming a great emergency.”

According to the document, “In the course of 2019 alone, more than 33 million people were newly displaced, bringing the total number to almost 51 million, the highest number ever recorded; and of these, 8.5 million (were displaced) as a result of conflict and violence and 24.9 million due to natural disasters.”

“In the first half of 2020, 14.6 million new displacements were recorded; 9.8 million as a result of disasters and 4.8 million associated with conflict and violence,” the document said, citing statistics from the Geneva-based Internal Displacement Monitoring Center.

In addition, it said, climate change is “a threat multiplier, intensifying existing conflicts where resources are scarce.”

Responding to the needs of people displaced within their home countries or forced to migrate because of climate-related catastrophes is “at the heart of being a credible and witnessing church, a caring and inclusive ecclesial community,” the document said.

Many people either do not know about the human cost of climate change or refuse to believe it, the text said. “Blindness about these issues is widespread and its causes are mainly: a) plain ignorance; b) indifference and selfishness vis-à-vis phenomena that endanger the common good; c) the purposeful denial of reality to protect vested interests; d) misunderstanding.”

“God gives the means to see, but human beings must be willing to journey from blindness to awareness,” the document said, which is why many of the suggestions in the text involve education at all levels of the church, ecumenical and interreligious cooperation in sensitizing people to the issues and in responding to the needs of people displaced by climate crises and listening to and advocating for the real needs of displaced people and those threatened with displacement. 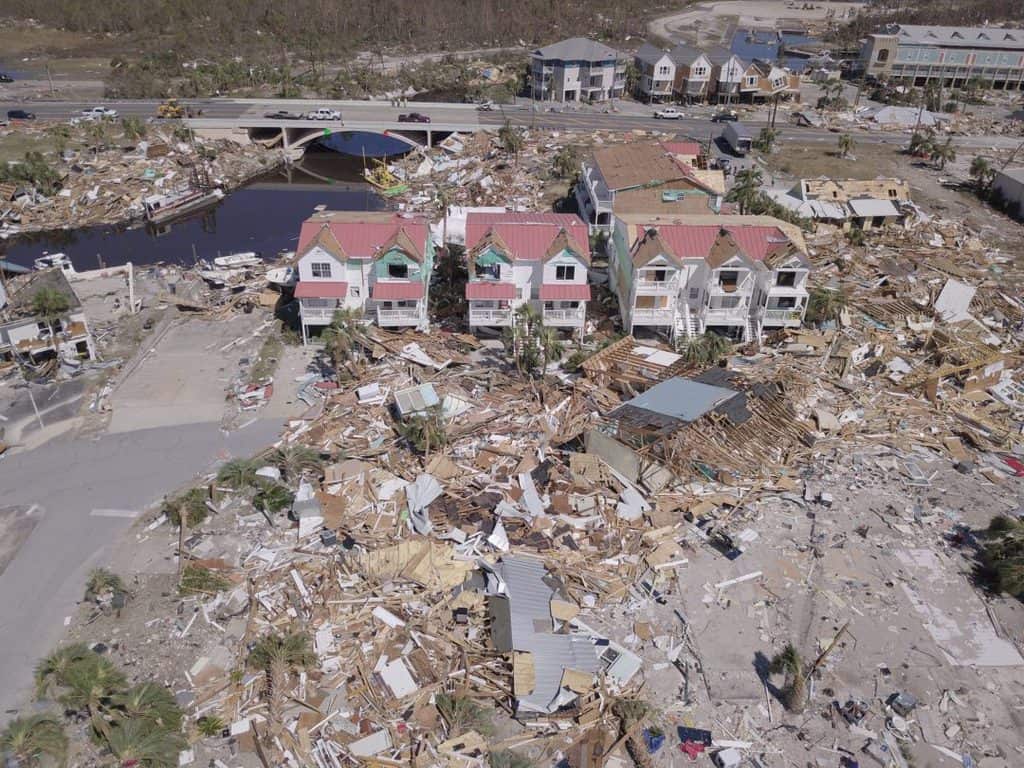 An aerial photo shows damaged and destroyed homes after Hurricane Michael smashed into Florida’s northwest coast in Mexico Beach, Florida, in this October 12, 2018, file photo. Many climate scientists have associated an increased number of natural disasters and their severity with climate change. (CNS photo/Dronebase, Reuters)

Presenting the document during an online news conference March 30, Salesian Father Joshtrom Kureethadam, an official at the dicastery, said, “Climate crisis and other ecological hazards are becoming the primary drivers for displacement, and could re-shape patterns of migration in the coming decades.”

The crisis, he said, “is ultimately a moral problem. The poor and vulnerable communities whose carbon emissions are only a fraction of those of the rich world are already the early and disproportionate victims of the crisis.”

Asked to clarify the moral teaching behind the document, Cardinal Michael Czerny, undersecretary for migrants and refugees, said, “I don’t think the moral argument needs to be any more complex” than that all human beings were created by God, are brothers and sisters to each other and are living on the same planet. They have an obligation to each other and to the earth.

“We really seem to be at the point of deciding, actively or passively, whether we will take care of the one home we have or we destroy it,” the cardinal said.

Maria Madalena Issau, a 32-year-old widowed mother of five, who also cares for her two orphaned nephews, joined the conference from Mozambique, where she lives in a displaced persons’ camp outside of Mutua. She and the children have lived in the camp since March 2019 when Cyclone Idai struck Beira where she was living on the beach, buying and reselling fish to support her family.

A nongovernmental organization is starting to build one-bedroom homes to replace the tents at the resettlement center, she said, but there is “no work and no businesses, no projects to educate the youth or to occupy the people, and for odd jobs people must travel many kilometers.”

Archbishop Claudio Dalla Zuanna of Beira told reporters, “Climate change is not a hypothetical threat, but a reality that requires immediate action, including the creation of the conditions necessary to welcome those displaced by the increasing number of catastrophes.”

Emergency responses, “sometimes motivated by emotions that disappear rapidly,” are not enough, the archbishop said. Nor is it right to simply resettle people without thinking about how to provide essential services.

Where communities are particularly at risk of severe storms, flooding or desertification, he said, the obligatory contingency planning called for by the new document obviously applies to governments, but “also to the church in its vocation to be a welcoming home, the family of God.”

Featured image: A woman collects water for washing as floodwaters begin to recede in the aftermath of a 2019 cyclone near Beira, Mozambique. Many climate scientists have associated an increased number of natural disasters and their severity with climate change. (CNS photo/Mike Hutchings, Reuters