Mexico’s bishops echo sentiments of their U.S. counterparts expressing disappointment with the reinstatement of ‘Remain in Mexico” policy.

REYNOSA, Mexico (CNS) — Mexico’s bishops expressed disappointment with their government’s willingness to go along with a plan known as Remain in Mexico, in which people seeking asylum in the United States wait in dangerous border cities as their cases are heard in U.S. courts.

In a Dec. 6 statement, the bishops also called on the federal government to “promptly carry out its commitments to promote and protect the fundamental rights of people in the context of migration.”

“We receive with disappointment news that the government of Mexico has decided to resume the MPP (Migrant Protection Protocols) program, better known as ‘Remain in Mexico,’ as it violates multiple international principles on refugee and asylum matters, such as the right to due process and non-refoulement and does not allow the due exercise of the fundamental rights of persons requesting recognition of refugee status,” said the statement signed by seven bishops, including Archbishop Rogelio Cabrera López of Monterrey, conference president.

“With deep sincerity we wish that the persons migrating who are in Mexican territory can see the light of hope in this valley of indifference, pain and discrimination on the part of the authorities,” the statement continued.

“The Catholic Church of Mexico, through the (migrant ministry) manifests its willingness to dialogue with the federal government in order to channel effective proposals to benefit migrants, asylum-seekers and Mexicans deported and in situations of being displaced internally.”

The U.S. and Mexican governments have announced an agreement to revive the Remain in Mexico program. The first participants in the program were expected to be returned to Mexico Dec. 6.

Faith groups in the United States, which included many Catholic advocates, reacted with great disappointment at the news of the reinstatement of ‘Remain in Mexico.”

“We are deeply dismayed by the reimplementation of MPP,” said Auxiliary Bishop Mario E. Dorsonville of Washington, chairman of the U.S. Conference of Catholic Bishops’ Committee on Migration for. “Unfortunately, attempts by the Administration to make this program ‘more humane’ — however well-intentioned — will not cure its inherent faults, nor will they alleviate its inevitable toll on human lives. We are especially concerned that this will perpetuate the existing tragedy of family separation, since many mothers and fathers are likely to feel compelled to part ways with their children in a desperate attempt to ensure their safety.”

The U.S. Department of Homeland Security has pledged to improve the program by providing asylum-seekers with access to legal representation, resolving asylum claims within six months and sending resources to Mexico for the care of program participants.

The Mexican government agreed to the U.S. request for restarting the program, saying the U.S. government has satisfied concerns such as providing protection for vulnerable groups and offering medical checkups and vaccinations to migrants. 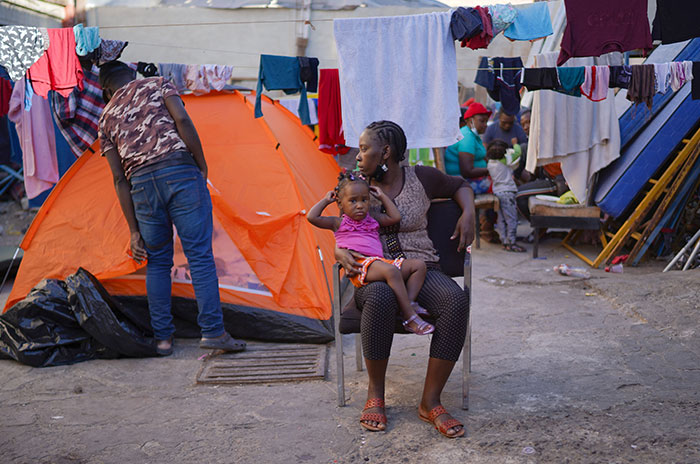 A woman from Haiti sits with her child at the Alfa y Omega migrant shelter in Mexicali, Mexico, Dec. 2, 2021. In a Dec. 6 statement, the Mexican bishops expressed disappointment with their government’s willingness to reinstate the Migrant Protection Protocols, known as Remain in Mexico. (CNS photo/Victor Medina, Reuters)

U.S. President Joe Biden campaigned on scrapping the Remain in Mexico program, which was started by his predecessor, President Donald Trump. However, in August, a U.S. federal court ordered that the program be restarted.

Advocates working with migrants say the Remain in Mexico program comes as the United States has already limited access to the asylum process.

Many potential asylum-seekers are expelled to Mexico for health reasons under Title 42, which was imposed during the pandemic by Trump and kept in place under Biden.

Advocates say people returned people to dangerous Mexican border cities under both Title 42 and Remain in Mexico would routinely fall into the hands of kidnappers.

The medical charity Doctors Without Borders found 80% of Remain in Mexico participants treated as patients in the drug cartel stronghold of Nuevo Laredo, opposite Laredo, Texas, had suffered violence while in Mexico.

In the city of Matamoros, opposite Brownsville, Texas, Remain in Mexico participants formed a camp alongside the Rio Grande. The camp became infested with snakes, was flooded out and became controlled by organized crime. Camp residents became so desperate that some paid smugglers to take their children across the river, where they hoped U.S. authorities would release the minors into the custody of relatives already residing in the United States.

“They should find another way to be able to receive migrants so they are not returned to Mexico and so these camps are not reestablished,” said Father Francisco Gallardo, director of migrant ministries for the Diocese of Matamoros. He called the camps “totally inhuman.”

“Things are really bad right now, and it would get even worse if they start dropping people off and saying ‘wait in Mexico,'” Scalabrinian Father Pat Murphy, who directs a migrant shelter in Tijuana, said in an interview after the court ordered Remain in Mexico restored.

“The problem is: wait for what? There’s still no asylum process active. There’s only asylum for a few vulnerable people … people with some sort of illness or children,” he said. “There’s no consistency.”

Featured image: A woman from Haiti sits with her child at the Alfa y Omega migrant shelter in Mexicali, Mexico, Dec. 2, 2021. In a Dec. 6 statement, the Mexican bishops expressed disappointment with their government’s willingness to reinstate the Migrant Protection Protocols, known as Remain in Mexico. (CNS photo/Victor Medina, Reuters)