MEXICO CITY (CNS) — Peruvian Archbishop Hector Miguel Cabrejos Vidarte and President of CELAM called for a “second reception” of the Second Vatican Council as prelates, religious and laity participate in the Sixth Ecclesial Assembly of Latin America and the Caribbean.

Archbishop Cabrejos additionally referenced the CELAM 1968 assembly in Medellín, Colombia, which he described as the “creative reception” of the Second Vatican Council. The document from that conference called for an “effective preference to the needy and poorest sectors.”

The Nov. 21-28 ecclesial assembly gathers roughly 100 participants — a reduced number due to the COVID-19 pandemic — along with more than 900 participants from across Latin America and the Caribbean, who will contribute virtually.

Unlike past conferences of CELAM Latin American bishops, the ecclesial assembly includes the active participation of priests, religious and lay Catholics. It also comes after widespread consultation. 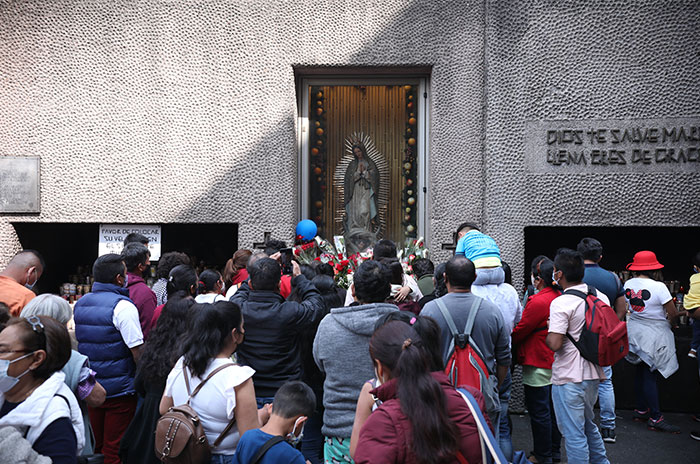 Worshipers pray near an image of Our Lady of Guadalupe outside the basilica with her name in Mexico City Nov. 21, 2021, during the opening of CELAM’s Sixth Ecclesial Assembly of Latin America and the Caribbean. (CNS photo/Emilio Espejel)

In a pre-assembly interview, Archbishop Cabrejos told Catholic News Service: “Some 70,000 individuals and groups spoke of their wants, desires and requests of the church. Why? … To open new paths forward, new ways of educating in the pastoral faith, new ways of evangelizing, new ways of being in the society and world of today.”

During his Nov. 21 homily at the Basilica of Our Lady of Guadalupe, the archbishop described the process as “a step from an assembly where only bishops participated to a fully ecclesial assembly, as an expansion of the exercise of ‘sensus fidelium,'” a sort of spiritual instinct that enables the believer to judge spontaneously whether a particular teaching or practice is or is not in conformity with the Gospel and with the faith.

He added, “It inaugurates a new synodal body in the continental sphere.”

In a Nov. 21 message, Pope Francis called the assembly participants’ presence “a new expression of the Latin American and Caribbean face of our church.”

The ecclesial assembly comes at a challenging time for Latin America and the Caribbean. Preparatory documents for the assembly speak of the church confronting social issues such as rising poverty and increasing inequality — products of the COVID-19 pandemic, which hit Latin America especially hard. Other issues the documents call for the church to address include chronic violence, migration throughout the region, the regional decline of democracy, reconciling with Indigenous populations and caring for the environment.

“We want, in difficult unity, in diversity, to respond to and accompany all of the people of God in a profoundly complex and difficult hour, in a time of pandemic, where the most vulnerable, Christ’s favorites, continue to be the most affected,” Archbishop Cabrejos said in his homily.

The assembly documents speak of challenges within the church itself and its shortcomings. Clerical sexual abuse cases have been widely mishandled, undermining church creditability and driving some to leave the faith altogether. Catholic populations continue declining across Latin America, with many people joining evangelical congregations and significant numbers identifying as nonreligious. 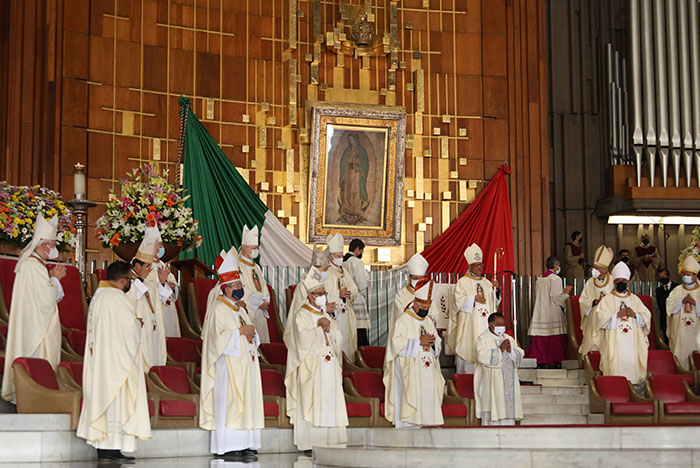 Peruvian Archbishop Hector Miguel Cabrejos Vidarte, president of the Latin American bishops’ council, or CELAM, holding crosier, poses alongside prelates during the opening of the Sixth Ecclesial Assembly of Latin America and the Caribbean at the Basilica of Our Lady of Guadalupe in Mexico City Nov. 21, 2021. (CNS photo/Emilio Espejel)

CELAM has chosen the theme “a church going out to the peripheries” for its assembly. Participants say this theme expands on the call made for evangelization made at Aparecida.

“Up to what point do we consolidate the options presented in the magisterium of Pope Francis, a church going out, church that is a field hospital, a servant church?” explained Jesuit Father Mauricio García Duran, executive director of Jesuit Refugee Service Colombia. “In some way, I think this is what is in some way at stake,” in the assembly.

In his message to the assembly, Pope Francis left participants with two words: listen and overflow.

“I ask you to try to listen to each other and listen to the cries of our poorest and most forgotten brothers and sisters,” the pope said.

“Community discernment requires much prayer and dialogue to be able to together find the will of God and also requires finding paths to overcoming and avoiding that differences become divisions and polarization,” he continued.

“In this process, I ask the Lord that our assembly be an expression of the ‘overflow’ of the creative love of his Spirit, that it push us to go out without fear of encounters with all others, and that it animates the church so that, through a process of pastoral conversion, it be increasingly evangelizing and missionary.”

Featured image: Peruvian Archbishop Hector Miguel Cabrejos Vidarte, president of the Latin American bishops’ council, or CELAM, concelebrates Mass during the opening of the Sixth Ecclesial Assembly of Latin America and the Caribbean at the Basilica of Our Lady of Guadalupe in Mexico City Nov. 21, 2021. (CNS photo/Emilio Espejel)