CELAM meeting is an opportunity for Latin America’s Indigenous peoples to highlight their role within the church and society.

LIMA, Peru (CNS) — Latin America’s Indigenous people will play a central role at a regional assembly the Catholic Church will hold at the end of November in Mexico.

The Sixth Ecclesial Assembly of Latin America and the Caribbean will plot a course for the church in the region as it heads toward landmark events in the coming years, including, in 2031, the 500th anniversary of Mary’s appearance to St. Juan Diego, a Chichimeca Indigenous man, in what is now Mexico City.

It is also an opportunity for Latin America’s Indigenous peoples to highlight their role within the church and society, and the challenges they continue to face across the region.

The assembly builds on Pope Francis’ 2015 “Laudato Si‘” encyclical and the 2019 Synod of Bishops for the Amazon, particularly its consultation or listening process. It also helps lay the groundwork for the 2023 Synod of Bishops on synodality.

“A synodal church is one in which everyone is heard. Indigenous people have been a step ahead of us with their assemblies and communal work. Their example is a major contribution to the synodality of the church,” said Bishop Rafael Cob of Puyo, Ecuador.

Latin America’s eight Amazon Basin countries had a head start for the assembly thanks to a listening process they undertook for the Amazon synod.

Church leaders in the eight countries — Bolivia, Brazil, Colombia, Ecuador, Guyana, Peru, Suriname and Venezuela — began a round of consultations after Pope Francis visited Puerto Maldonado, in Peru’s southern Amazon, in 2018. While not the first papal visit to an Amazon city, it was the first that specifically addressed the concerns of Indigenous people — representatives of groups throughout the Amazon participated — and environmental stewardship. 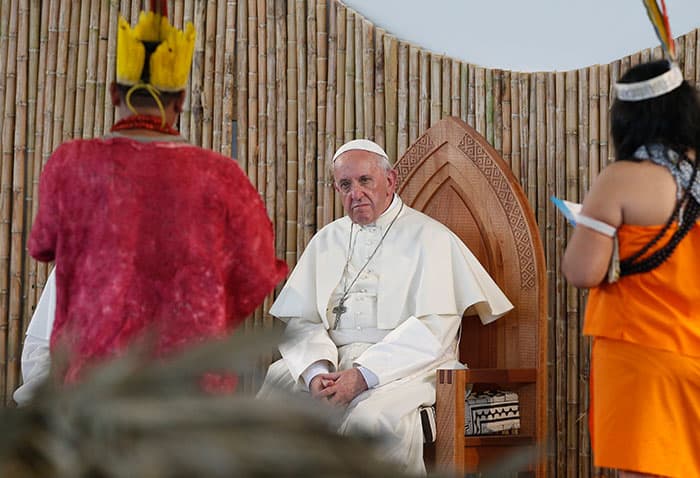 Pope Francis listens as people of the Amazon speak during a meeting in Puerto Maldonado, Peru, Jan. 19, 2018. While not the first papal visit to an Amazon city, it was the first that specifically addressed the concerns of Indigenous people. (CNS photo/Paul Haring)

Bishop Eugenio Coter of Pando, Bolivia, said the work that has been done prior to the Mexico assembly improved on the process that began with the Amazon synod.

“We moved forward the reflection that we have been doing since 2018. We are focused on a church that is about participation, about playing active role in communities,” he said.

The listening process then as now provides Indigenous people with an outlet to discuss a long list of issues within the church, ranging from bilingual education to new forms of evangelization, as well as the increasing economic, political and social threats communities face in their countries.

A critical change has been the formation of the Ecclesial Conference of the Amazon (CEAMA), which was formally recognized as a legal body by the Vatican in mid-October. Bishop Coter said the conference is like no other in the world, because it is ecclesial — including all communities — instead of episcopal, just for bishops.

“It is an avenue to listen to and be with communities, looking for new ways of inculturated evangelization,” he said.

Bishop Cob said CEAMA will allow the church to develop new options for formation of clergy and laity alike. He said the church in Puyo is at the forefront in training catechists, with a special focus on the role of women.

“We are preparing our catechists to be servers of this church with an Amazon face,” he said. “The voice of the people needs to be heard, and the church is not going to substitute this voice, but help channel it so that it is heard far and wide.”

The bishops recognize that the church’s work is not done in a vacuum and that pressures on its original peoples are increasing.

“Today, there is a greater awareness of Indigenous peoples and their contributions. Unfortunately, I do not think that this recognition has resulted in concrete improvements,” said Bishop Coter. 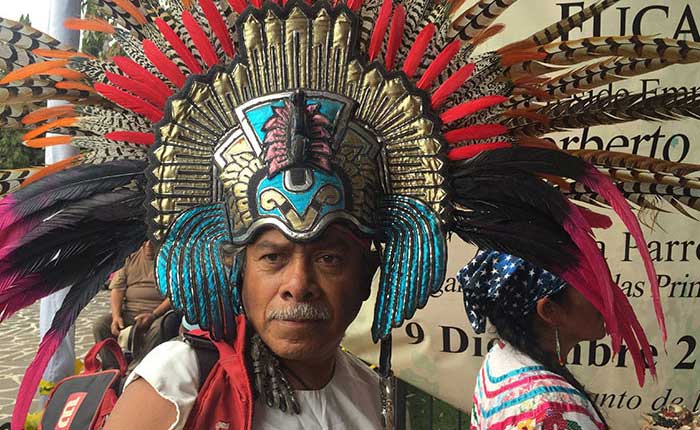 Jose Alfredo Robles, a “conchero” dancer, celebrates the feast day for St. Juan Diego at the Basilica of Our Lady of Guadalupe in Mexico City in this Dec. 9, 2015, file photo. A regional assembly of the Catholic Church will be held in Mexico in November and is expected to plot a course for the church in Latin America and the Caribbean as it heads toward landmark events in the coming years, including, in 2031, the 500th anniversary of Mary’s appearance to St. Juan Diego. (CNS photo/David Agren)
He said that in Bolivia, Indigenous communities are under threat by the private and public sectors. He said the state is insisting on the construction of dams along the Madidi River for hydroelectric power, even though the dams will displace native communities and are unfeasible from an economic standpoint.

Hundreds of Indigenous people in Bolivia marched 330 miles to the eastern city of Santa Cruz in September to demand the government follow through on its commitments to them, including some made after their first historic march in 1990.

The groups in Bolivia are not alone, with original peoples increasing their protests around the continent.

Chile’s government declared a state of emergency in the south of the country in early October to stop Mapuche people from protesting to demand return of ancestral lands, while in Peru, around 200 people from seven different Indigenous groups have occupied an oil pipeline to call attention to 50 years of environmental issues. And in Ecuador, Waorani Indigenous people have filed suit to stop the government from expanding oil production.

In Guyana, where the country’s nine Indigenous peoples make up half of its Catholic population, groups are making a new push for the government to grant title over ancestral lands. They have been lobbying for this more than a decade. 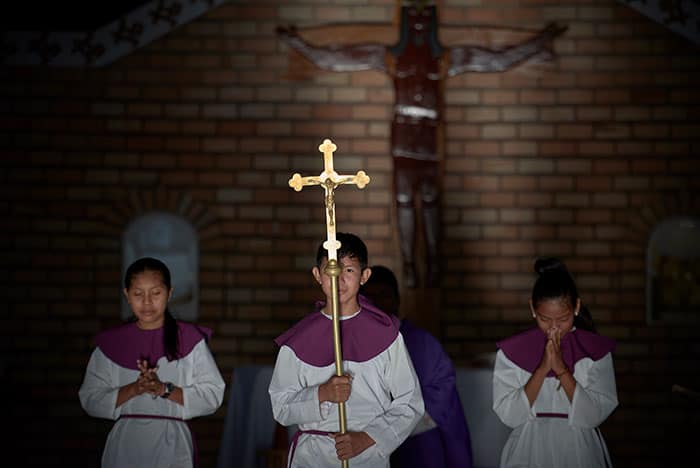 Altar servers process following Mass April 6, 2019, in St. Ignatius, Guyana. In Guyana, where the country’s nine Indigenous peoples make up half of its Catholic population, groups are making a new push for the government to grant title over ancestral lands. (CNS Photo/Paul Jeffrey)

Bishop Francis Alleyne of Georgetown, Guyana, said the government is interested in economic development, not development of people.

“The government is not genuinely interested in these communities. There is a lot of window dressing, but nothing more,” he said.

The Fifth General Conference of Bishops of Latin America and the Caribbean was in Aparecida, Brazil, in 2007. The preparatory document for the sixth conference in November notes that “In Aparecida, the members of the Indigenous and Afro-American peoples were recognized as new societal actors” demanding that recognition of their individual and collective rights be “taken into account in Catholicism.” It said this continues to be a moment for decisions and actions that reject “a colonialist style of evangelization.”

Quoting from Pope Francis’ apostolic exhortation after the Amazon synod, the preparatory document for the November meeting said Indigenous, Afro-descendants and peasants “‘are our principal dialogue partners, those from whom we have the most to learn. … Their words, their hopes and their fears should be the most authoritative voice at any table of dialogue’ about their respective territories.”

Featured image: Norberto Cruz da Silva, a leader in the Wapishana Indigenous village of Tabalascada in the Brazilian Amazon and the local catechist coordinator, is pictured April 3, 2019. As the church in Latin America and the Caribbean prepares for its ecclesial assembly Nov. 21-28, a bishop in Ecuador says, “We are preparing our catechists to be servers of this church with an Amazon face.” (CNS/Paul Jeffrey)