Supporters, asylum seekers gathered on both sides of the U.S.-Mexico border in support of the families fleeing violence in Latin America.

More than 200 supporters gathered on both sides of the U.S.-Mexico border near Nogales, Arizona, Sept. 25, the eve of the World Day of Migrants and Refugees, to accompany 25 families seeking asylum in the United States.

The Kino Border Initiative — a Jesuit-run organization that promotes border and immigration policies that affirm the dignity of the human person — is supporting the families, who are fleeing violence in various parts of Latin America.

“President Biden, save our asylum!” chanted marchers in English and Spanish as they gathered at the border fence for a rally at which several migrants shared their testimonies.

Christopher Kerr, executive director of the Ignatian Solidarity Network — of which the Kino Border Initiative is a part — told Catholic News Service from the Mexican side of the border that the migrants were not trying to cross the border illegally, but were trying to assert their legal right to asylum.

“We need to be aware that our country isn’t upholding the legal right to asylum,” Kerr said. “People are facing grave danger in their home countries, in places like Guatemala or Honduras or Mexico. We’re not upholding that right — to have their story heard.”

During the 2020 campaign, President Joe Biden promised to roll back “on Day 1” a Trump administration policy known as the Migration Protection Protocols policy, or “Remain in Mexico,” requiring those seeking asylum to await their hearing in Mexico, He also promised to stop the use of Title 42.

Title 42 is a provision of U.S. public health law activated by the Trump administration to expel migrants at the border, with the exception of minors, over COVID-19 concerns.

Biden did end the “Remain in Mexico” policy immediately, though the U.S. Supreme Court recently ordered the administration to reinstate that policy — which it has not done. 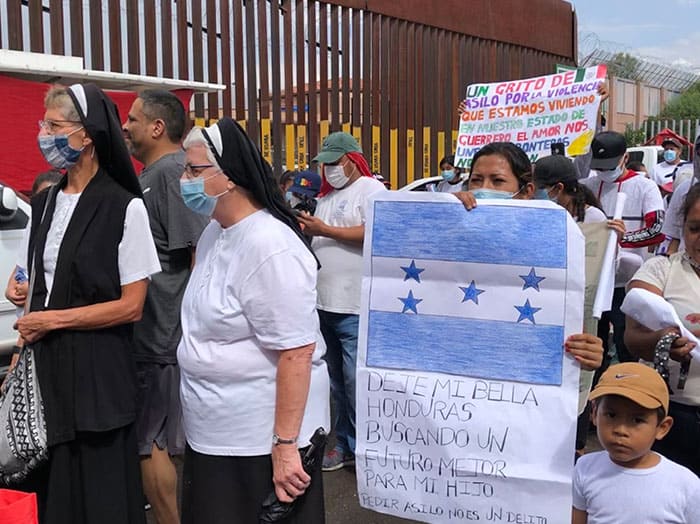 But under Biden, Title 42 remains in place, despite criticism for continuing it and a court battle over it.

One speaker at the rally said those migrants present were vaccinated against COVID-19 and were willing to take a test to prove it.

“President Biden campaigned on how we’d treat asylum-seekers and other immigrants. He’s the first U.S. president to talk about the situation of migrants and asylum-seekers at our border ever. Yet, look where this Biden policy is — it’s no different than what the Trump administration was doing for four years,” said Kerr.

During the rally each testimony was followed by a bilingual litany, with the leader crying “Respect their right” followed by “The right to asylum!” from the crowd.

Karla, who used only her first name, said she fled Guatemala with her two children after her husband was killed because the family couldn’t pay an extortion fee.

Even after arriving in Mexico, she said, she continued to face a danger of her children being kidnapped or of herself being assaulted. When she went to the border in Tijuana, Mexico, seeking asylum, she said the Border Patrol agents denied her entry and humiliated her.

“I cried along with my children, pleading and asking for help to ask for asylum. As I cried pleading to them for help, they laughed at me and my children,” she said in Spanish, adding that she had a similar experience in two other border cities.

Andrés, a migrant from the Mexican state of Guerrero, said some organized crime members tortured and humiliated him, threatening to kill him and his family if he didn’t cooperate. 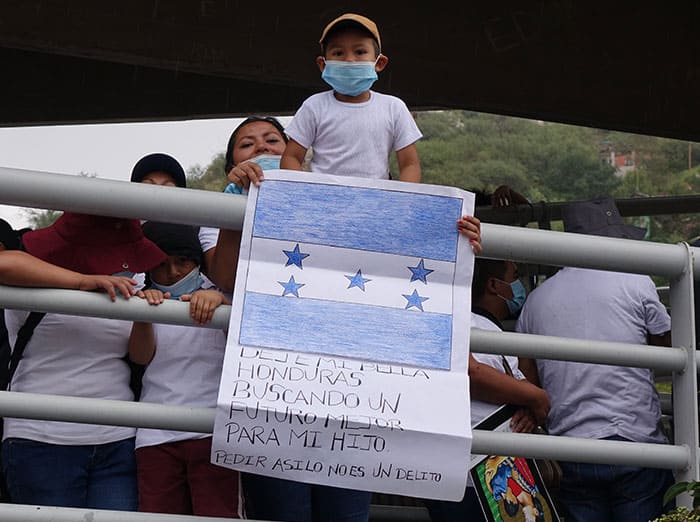 A Honduran boy and his mother are seen prior to the start of the “Restore Protections for Holy Families: Prophetic Action to #SaveAsylum” demonstration in Nogales, Mexico, Sept. 25, 2021. (CNS photo/courtesy Ignatian Solidarity Network)

“My house was guarded by those people. I decided to run away with my family because I don’t want them to live in fear that something might happen to them. That is why we are now requesting asylum, because I want a better future for my children,” he said.

Even in Nogales, however, Andrés, who also used only his first name, and his family are still facing insecurity. Migrants are unable to find work because they are considered “delinquents,” he said, and they also face extortion.

Lucia had been waiting with her husband and two children for two months. She noted that there are other migrants who have been waiting a year and half for Biden to end the asylum waitlisting.

“The simple fact that Title 42 is still in place shows that Biden is continuing the same racist policies from the Trump administration,” she said in Spanish. “We see that he really isn’t interested in restoring asylum, because if that were the case, he would have ended this policy and would have taken steps to restore asylum.”

From the Mexican side of the border, Bishop Edward J. Weisenberger of Tucson, Arizona, offered a prayer and blessing for all those participating in the march, comparing the experience of the migrants with that of the Israelites facing persecution in Egypt.

“God of wisdom, who gave Moses the words he needed to inspire his people, even when he doubted himself, calm the anxieties of these families and inspire in them the words they need in their encounters with Customs and Border Protection officers,” the bishop said.

Supporters on both sides of the border wall headed toward the he DeConcini Port of Entry at Nogales, Arizona, marching in solidarity with the 25 families requesting asylum. Kerr told CNS that all of them were not only denied entry, but were completely ignored.

“Asylum-seeking families were hoping they’d be heard today by CBP (Customs and Border Protection). The first family that went to the port of entry with the bishop, they wouldn’t acknowledge them, they wouldn’t even respond, even when the bishop made a request of them verbally,” he said.

“The door was shut. It was kind of biblical, in a way,” Kerr added, reflecting on the story of the Holy Family seeking shelter before Jesus was born.