WASHINGTON (CNS) — The president of the U.S. Conference of Catholic Bishops has asked bishops across the country to take up a voluntary collection to help Haiti recover from a recent pair of natural disasters.

Saying that Haitians are likely to experience continuing hardships from an Aug. 14 earthquake and a tropical storm that swept through the ravaged southwestern part of the country days later, Archbishop José H. Gomez of Los Angeles made the request in a letter to bishops.

Money collected will be funneled to the Bishops Emergency Disaster Fund and will be used to support the pastoral and reconstruction needs of the Haitian Catholic Church as well as efforts of Catholic Relief Services and possibly Catholic Charities USA.

The USCCB said in a news release Aug. 20 that if the money collected cannot be distributed in Haiti, funding will be used for other emergency relief where it is needed most as determined by the bishops’ Committee on National Collections.

Archbishop Gomez acknowledged in the letter that many U.S. dioceses continue to feel the financial pinch of the COVID-19 pandemic, but recognized that parishioners are generous and harbor deep care for people in need around the globe.

In addition, the bishops’ Subcommittee on the Church in Latin America has approved $10,000 grants to three dioceses in Haiti that have been most heavily affected by the disaster.

Workers with CRS, the U.S. bishops overseas and relief agency, continue to distribute humanitarian aid in the affected region.

In the Diocese of Brooklyn, New York, Bishop Nicholas DiMarzio has asked all parishes through the New York boroughs of Brooklyn and Queens to schedule a special voluntary collection for victims of the earthquake during the next two weekends. 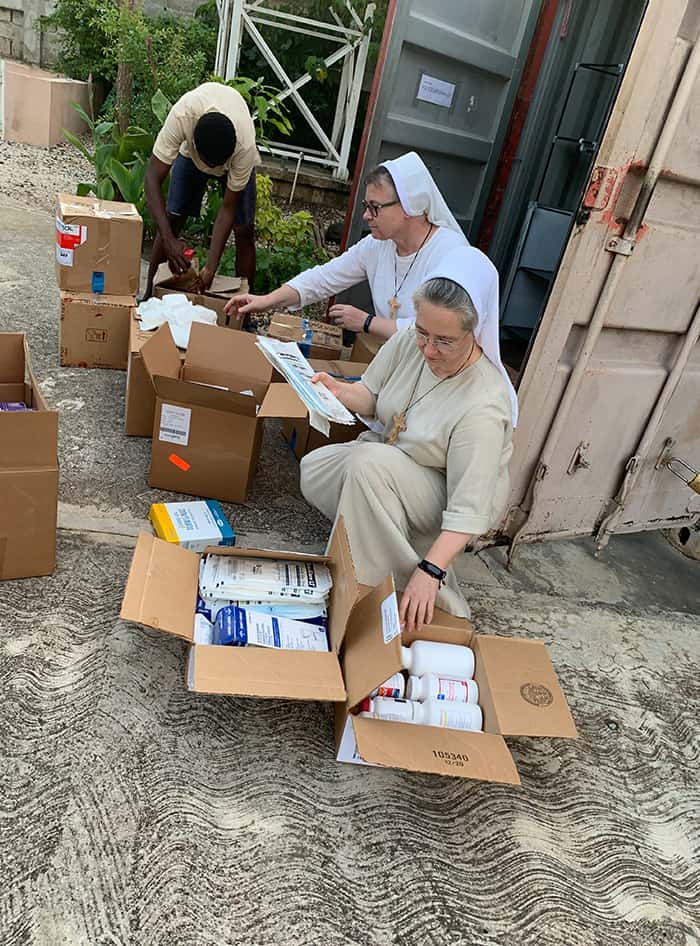 “We have all seen the painful images of devastation and heard of the deaths caused by the most recent earthquake in Haiti,” Bishop DiMarzio said Aug. 19. “Our heartfelt prayers go out to all those affected by this terrible disaster. I ask the Lord to extend His blessings upon our brothers and sisters in Haiti during this difficult time.”

The funds raised in the special collection at parishes will be sent by the diocese for distribution and direct assistance to those who have been affected, the diocese said.

The CEO of the Knights of Columbus, Patrick Kelly, announced that his organization has made an initial commitment of $250,00 to assist those suffering on the island nation.

“Our prayers are with our neighbors in Haiti as they recover from yet another tragedy and seek once again to rebuild,” Supreme Knight Kelly said Aug. 19. “Just as we reached out to provide aid following the 2010 earthquake, the Knights of Columbus will again reach out in charity to help our neighbors in need in Haiti.”

After the 2010 earthquake, the Knights became active in Haiti, providing over $1 million in financial assistance to Haitians in need, in particular to help restore mobility to those injured in the quake.

Through its partnership with the Global Wheelchair Mission, the Knights of Columbus has delivered more than 1,000 wheelchairs to Haiti. In collaboration with Project Medishare, the Knights contributed major financial support for a sustainable prosthetics and rehabilitation program in Haiti and helped to create the Emilio B. Moure Clinic for Hope in Port-au-Prince.

The clinic, named for the Knights’ late supreme secretary, houses materials and equipment, and it serves as a classroom for training Haitians who are eligible to be hired as prosthetic technicians.

“The Knights of Columbus is a fraternal organization with a deep sense of brotherhood among our members,” Kelly said. “In keeping with the mission of our founder, Blessed Michael McGivney, we are also deeply committed to a charity which sees all humanity as brothers and sisters.”