Department of Health and Human Services  investigates allegations of abuse at Fort Bliss camp for unaccompanied migrant minors in Texas.

The Office of the Inspector General for the Department of Health and Human Services is investigating allegations of abuse at a Texas camp for unaccompanied migrant minors.

The inquiry follows whistleblower complaints about conditions at the shelter, particularly as the number of unaccompanied minors coming into the country grows.

The government watchdog agency said in the months since the Fort Bliss facility opened to minors near El Paso, Texas, “several individuals have raised concerns about the quality of case management provided there, and its negative impact on children’s safety and well-being.”

Some of the complaints allege lack of clothing, including underwear, provided to minors, outbreaks of lice, inadequate facilities or staff trained to care for minors, as well as confusion leading to anxiety among the population, who is said to receive little information about when they could be released. 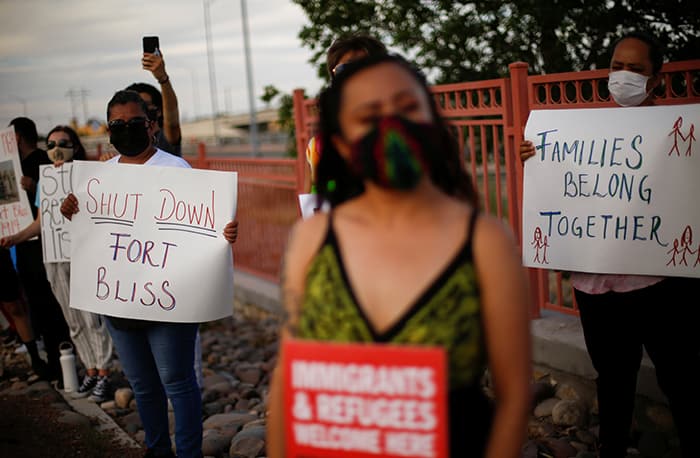 Protesters gather near Fort Bliss in El Paso, Texas, June 8, 2021, to call for the end of the detention of unaccompanied minors at the facility. (CNS photo/Jose Luis Gonzalez, Reuters)

Figures from HHS show that as of July 19, there were some 14,300 unaccompanied migrant minors in government custody. The Fort Bliss tent, one of the largest facilities to house the minors, has 10,000 beds available.

Catholic organizations as well as bishops, including El Paso Bishop Mark J. Seitz, have argued that smaller facilities run by the church and other nonprofits, with familylike settings, are better suited to care for the minors than the larger tents the government, under both the Trump administration and now the Biden administration, have used to deal with the surge.

Bishop Seitz has celebrated Mass at the facility since April and even collected prayers from the minors at the facility, including one that read, “God, I ask you that you help me get out of here and that you take care of my mom.”

In early June, he presented the minors’ prayers, written on colorful paper, to a group of bishops from the U.S. and Central America, as the group gathered in Illinois to find ways the church can respond to immigration issues. 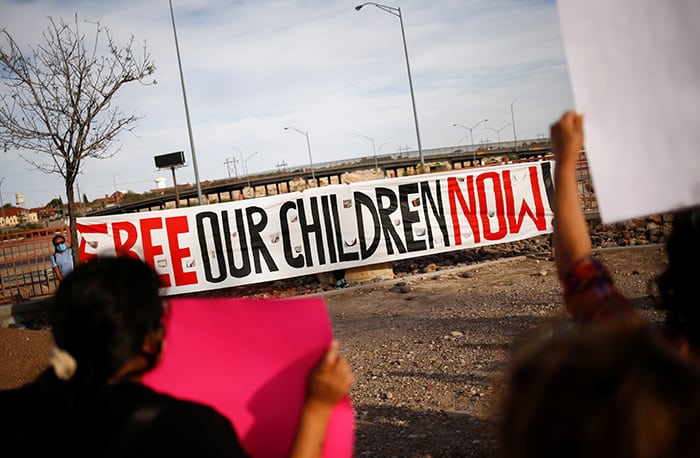 Protesters near Fort Bliss in El Paso, Texas, hold signs calling for the end of the detention of unaccompanied minors at the facility, which opened in late March. (CNS photo/Jose Luis Gonzalez, Reuters)

Later that month, when he was visiting the children at the Fort Bliss facility again, one of his two Masses was canceled because record-setting rain forced the camp to close and the siding on the tents didn’t go all the way to the ground, causing some leakage, the prelate told the El Paso Times.

The newspaper also reported June 30 that the bishop had “spoken with children at heightened levels of mental health distress during his visits, including a young girl who had been fighting the urge to self-harm,” adding that he said religion and art have helped the minors cope with the stress experienced at the facility.

In early July, members of the pro-immigrant Welcome with Dignity coalition called on the Biden administration to release the minors and close the tent facility, citing abuses. Many groups also have protested the facility, which opened in late March, asking for its closure.

A report is expected to be released later in the year.

Featured image: Protesters gather near Fort Bliss in El Paso, Texas, June 8, 2021, to call for the end of the detention of unaccompanied minors at the facility because of alleged abuses there. (CNS photo/Jose Luis Gonzalez, Reuters)