The Jesuit, who worked for the rights of oppressed indigenous people in India, was arrested on dubious charges of conspiracy.

THRISSUR, India (CNS) — Jesuit Father Stan Swamy, 84, jailed on dubious terrorism charges since October, died July 5 at Holy Family Hospital in Mumbai. He had been moved to the hospital from jail in late May, under orders from a local court. 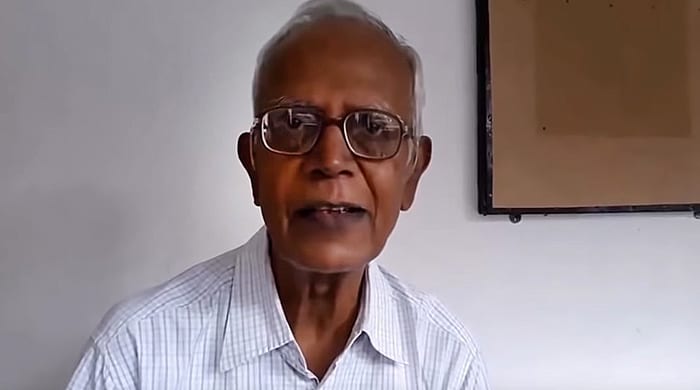 Jesuit Father Stan Swamy, pictured in a screenshot, who had been jailed on dubious terrorism charges since October, died July 5, 2021, at Holy Family Hospital in Mumbai, India. He had been moved to the hospital from jail in late May, under orders from a local court. (CNS screenshot/YouTube)

The National Investigation Agency cited India’s anti-terrorism law when it arrested Father Stanislaus Arulswamy, known by his shortened name “Stan Swamy,” in Ranchi Oct. 8. The agency accused the Jesuit, who worked for decades speaking out for the rights of oppressed Indigenous tribals in Jharkhand state, of being part of a political conspiracy with Maoist rebels to destabilize the federal government.

Soon after his arrest, the priest was airlifted to in Mumbai and put in the Taloja jail with 15 other social activists, academics and lawyers charged under the same law.

The All India Catholic Union reaffirmed demands for a judicial inquiry into the priest’s jailing and death. “In jail, with his health failing with advanced states of Parkinson’s disease, he was denied basic human dignity and facilities, including a simple water sipper, as he could no longer hold a cup in his trembling hands,” the union said in a statement. 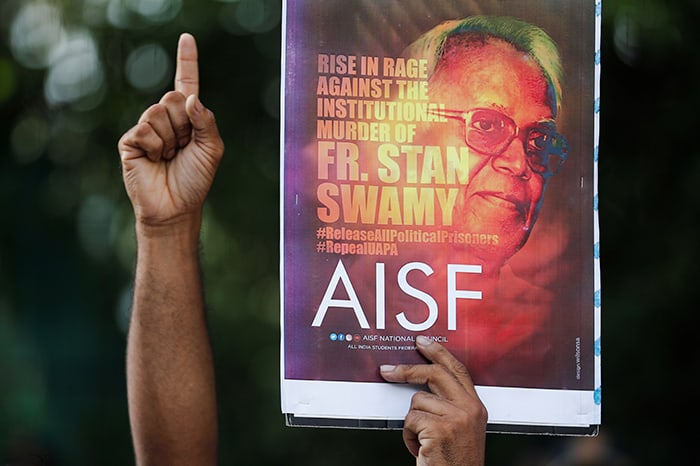 A man gestures as he holds a placard during a protest to show solidarity with Jesuit Father Stan Swamy in Mumbai, India, July 7, 2021. The 84-year-old priest, who died at a hospital July 5, had been under detention on dubious terrorism charges since October and was moved to the hospital from jail in late May, under orders from a local court. (CNS photo/Francis Mascarenhas, Reuters)

It noted that one of Father Swamy’s last messages from jail was: “What is happening to me is not something unique, happening to me alone. It is a broader process that is taking place all over the country. We are all aware how prominent intellectuals, lawyers, writers, poets, activists, student leaders — they are all put in jail just because they have expressed their dissent. … I am ready to pay the price, whatever it may be.”

Father Stanislaus D’Souza, Jesuit provincial of South Asia, told Catholic News Service from New Delhi: “Father Stan stood up for the poor tribals, lived among them and led a simple life like them. We pray his life and his death in (this) extraordinary situation will be inspiration for all those who work for justice.”

Featured image: People hold a banner during a prayer service for Jesuit Father Stan Swamy in Mumbai, India, July 6, 2021, after he died at a hospital the previous day. The 84-year-old priest, who had been under detention on dubious terrorism charges since October, was been moved to the hospital from jail in late May, under orders from a local court. (CNS photo/Francis Mascarenhas, Reuters)