Vice President Harris stresses need to fight for democracies and against corruption on Central American trip.

WASHINGTON (CNS) — During her first foreign trip to Latin America as U.S. vice president June 7 and 8, Kamala Harris took on a topic that has long been on the mind of the Catholic Church in the Americas: alleviating the problems that force Central Americans, in particular, to leave their homelands and take part in a perilous journey north.

“We still maintain that the main reason for migration, for this exodus of migrants toward the United States that passes through Mexico, is poverty,” said Guatemalan Cardinal Álvaro Ramazzini.

He addressed a group of bishops June 2, via Zoom, gathered outside Chicago, along with leaders of prominent Catholic organizations from the U.S., Central America and Mexico, days before the vice president’s visit.

Cardinal Ramazzini, who has seen the good and bad effects of migration on both sides of the border, emphasized the urgency of addressing corruption and an economic system rooted in greed that doesn’t allow the poor — seeking better wages, housing and education– any other option but to leave.

“The topic of corruption continues to worry us tremendously,” Cardinal Ramazzini said to brother bishops gathered at Mundelein Seminary. “You’ve heard it from Pope Francis’ point of view: It is like leprosy, a cancer that destroys the social fabric of civil society.”

Though there had been talks about Catholic Church officials in Guatemala meeting with Harris to express their concerns during her June 7 stop in Guatemala City, the vice president concentrated her time on listening to government officials and entrepreneurs. 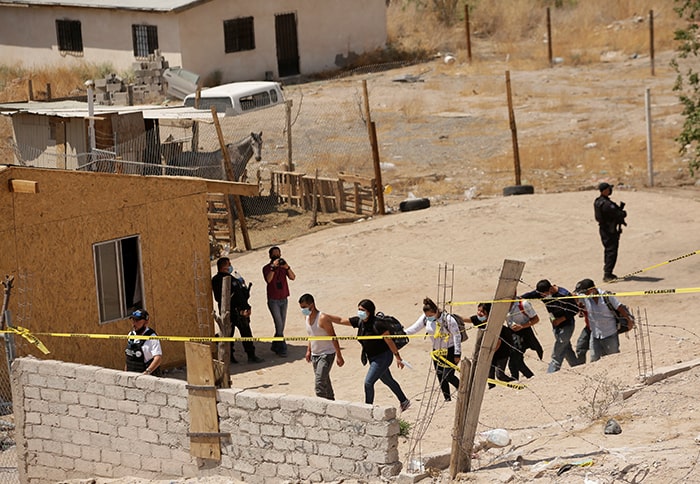 Migrants from Central America are seen in Ciudad Juarez, Mexico, June 9, 2021, after being rescued by the police from human smugglers. Local media reported that 140 migrants were held against their will inside a house. (CNS photo/Jose Luis Gonzalez, Reuters)

Walking a political tightrope by appearing with two presidents who have publicly criticized U.S. efforts to fight corruption in the region, Harris announced, nonetheless, that a new U.S. anti-corruption task force in the region is in the works.

“If we are truly to have a fight for democracies, especially in a world where they are increasingly under attack, one central agreement must be to fight corruption,” Harris said during a news conference announcing the task force just feet from Guatemalan President Alejandro Giammattei June 7.

Giammattei recently criticized the top lawyer for his country’s office of the Special Prosecutor Against Impunity, saying he was “biased.”

Making structural changes in the relationship among the governments of the U.S., Mexico and the nations of Central America is important, said Cardinal Ramazzini, but he admitted that it comes during a trying political time for Central America.

The Nicaraguan government, ruled by President Daniel Ortega and his wife, Rosario Murillo, has been detaining opposition candidates, incarcerating any competition that would pose a threat to him in the country’s upcoming presidential elections in November.

In El Salvador, President Nayib Bukele — who got rid of any checks to his power by firing five Supreme Court justices and an attorney general who had opposed him when his party took over legislative power in May — has openly displayed contempt for the U.S. 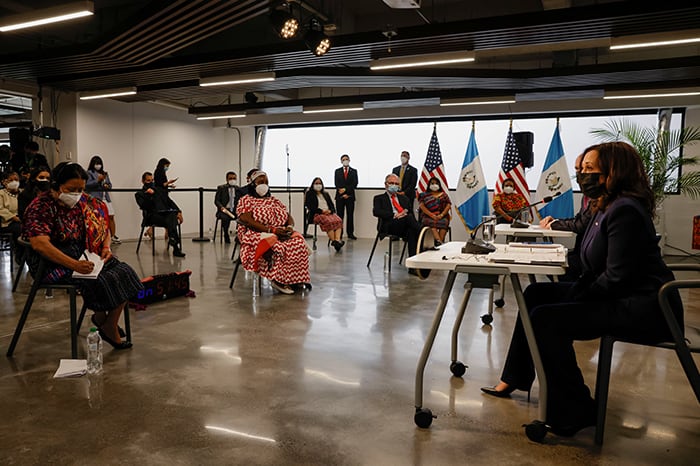 “We have to take into account the dictatorial attitude of the gentleman in Nicaragua … and another negative aspect, the attitude Mr. Bukele has adopted,” when it comes to countries collaborating on joint economic initiatives for the region that can help stem migration, said Cardinal Ramazzini.

It also does away with the dream of reviving the Central American Common Market, Cardinal Ramazzini said, recalling an economic agreement among Costa Rica, El Salvador, Guatemala, Honduras and Nicaragua in the 1960s that facilitated regional economic development through free trade and economic integration.

Some argue that many leaders in the region don’t want emigration of their citizens to stop, since the money they send home to relatives effortlessly props up their governments’ economies — to the tune of 14% to 21%, according to the World Bank — far more than any foreign aid that comes in.

The Biden administration’s plan is to inject $4 billion into El Salvador, Honduras and Guatemala to fight poverty, create jobs, address climate change as well as violence and to improve conditions in those countries so its citizens won’t leave. It hinges on governments’ cooperation against corruption, and greater transparency but many doubt the leaders’ commitment.

Catholic Church organizations, such as Catholic Relief Services, with long-term involvement in the region and a record on job creation, anti-violence and educational programs, may be uniquely positioned to help in that plan.

Sean Callahan, CRS’ president and CEO, who also attended the bishops’ meeting at Mundelein Seminary, said June 2 the organization has been in dialogue with the Biden administration. 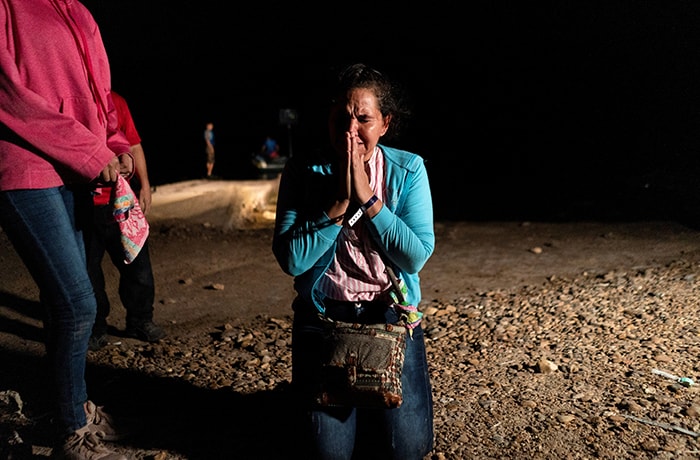 Recently, in places like El Salvador, because of the firing of the top judges, the U.S. Agency for International Development redirected U.S. funds that were going to national police and other Salvadoran law enforcement agencies, funneling the money instead to civil society groups, including some that fight corruption and promote transparency.

Military as well as national police in the region had received funding under the Trump administration to help keep migration to the north at bay, but U.S. officials ultimately pulled the funds and in a March 2021 TV show, former President Donald Trump admitted the money had been cut as punishment because “nobody knew what they (the governments) were doing with the money.”

“If you want something that’s sustainable, give it to the sustainable actors and let’s demilitarize the whole migration issue,” said Callahan.

The Mexican and Guatemalan Catholic bishops’ conferences, though they weren’t able to meet with Harris, reached out to her with statements.

“Irregular migration is the product of a failed economic and political system, which has not given priority to the solution of the structural causes that give rise to these migrations,” said the Guatemalan Episcopal Commission for Human Mobility in an open letter to Harris before her visit. 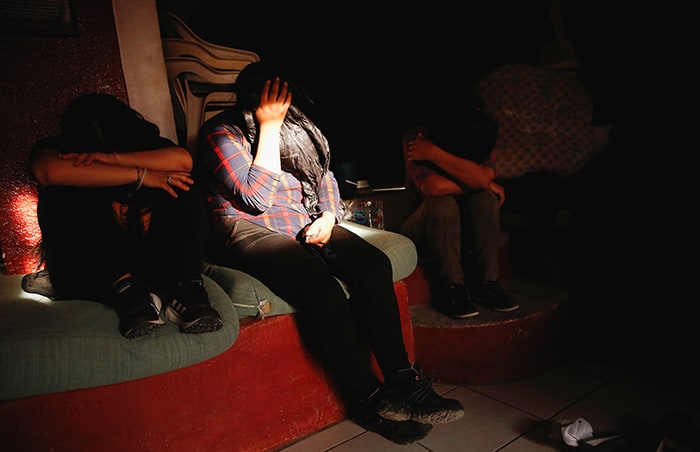 Migrants from Central America are seen inside a house in Ciudad Juarez, Mexico, June 9, 2021, after being rescued by the police from human smugglers. Local media reported that 140 migrants were held against their will inside a house. (CNS photo/Jose Luis Gonzalez, Reuters)

The “best policy,” the Mexican bishops said, is following the example of the good Samaritan, when “we take care of the weakest and most wounded in our societies, eliminating their dependencies and slavery, creating opportunities so that they can be more and more protagonists of their own destiny.”

Harris faced criticism of her trip in the U.S. Some took offense at her “do not come … you will be turned back” statement, as she tried to tell people in Central America not to migrate. But in the region, Salvadoran Bishop Oswaldo Escobar, who also attended the early June bishops’ meeting on immigration in Chicago, said the visit generated hope, though many doubted it would stop people from leaving.

“We value the effort of this administration in contrast with the previous one. That’s my personal opinion,” he told Catholic News Service June 10 via a WhatsApp audio. “But we’re fractured in the region and any effort will be more difficult than before, but we see the visit as something positive because the goal is to help.”

Any effort to help the region, however, has to go hand-in-hand with legalizing Central Americans in the U.S. without documents, he said.