Vice president “demonstrated a willingness to work with the Catholic community” on immigration, bishop says.

WASHINGTON (CNS) — Bishop Mark J. Seitz of El Paso, Texas, asked Vice President Kamala Harris June 25 to engage with the faith community as partners on a path to bring relief and a compassionate solution to immigration issues in the Americas and to “hear the voices” of those turned away at the border.

He also invited her to join Catholic bishops from the U.S. and Central America in an upcoming meeting in Washington to talk to Congress about the root causes of migration.

In the border town, where the bishop has in the past accompanied migrants seeking refuge at a nearby international bridge, the Catholic Church, along with other faith communities, has long had a front seat to the unfolding immigration drama and extended a helping hand, from shelter to clothing, to legal advice and food, to those at their doorstep.

So, when Bishop Seitz addressed Harris, after she visited a U.S. port of entry where U.S. Border Patrol agents screen asylum-seekers, he spoke with years of experience behind him, working with and witnessing the works on various faith groups, not just Catholics, in trying to address the topic.

“Why is your visit today important? Borders are places where the drama of human life — its suffering and aspirations — unfolds and they put squarely before us a moral choice — to build bridges of encounter or walls of fear,” he told Harris when she met him as part of a gathering of local leaders of nonprofits and faith groups that help migrants in the border town.

Dylan Corbett, of El Paso’s Hope Border Institute, who also attended the meeting, told Catholic News Service later that the vice president was more intent on listening than talking but said she “recognized the contribution the Catholic Church has made in immigration and demonstrated a willingness to work with the Catholic community” on the issue. 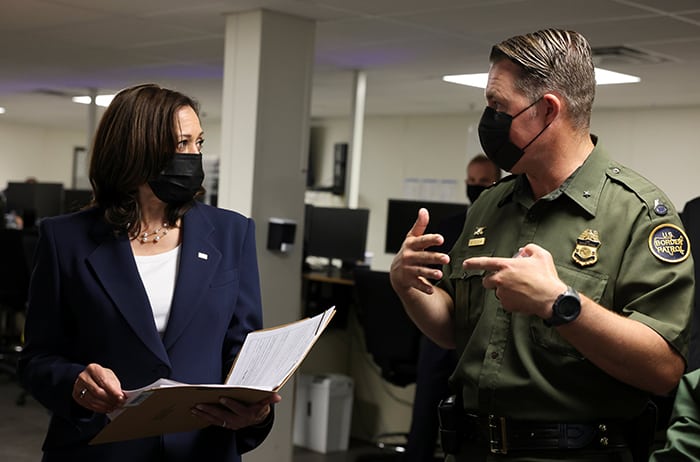 Bishop Seitz told Harris he welcomed her “on behalf of Christ, present in our borderland community in so many beautiful ways — present in our resilience, our spirit of compassion and service. And present in the poor knocking at our doorstep, in the migrant and refugee.”

The Catholic Church, along with the advocacy work of the U.S. Conference of Catholic Bishops and nonprofits such as Catholic Relief Services, has long focused on the issue of root factors, trying to figure out and alleviate some of the reasons that lead people from Central America, and other parts of the hemisphere, to leave home and migrate north, he told her.

But those migrating shouldn’t be looked at through the prism of “otherness” or as if they’re a problem to fix, Bishop Seitz said.

“We must also avoid the danger of thinking the problem is only with them: their corruption, their underdeveloped economies, their widespread violence,” he said. “This, too, is a form of ‘othering.'”

He continued, “We cannot ignore our historical complicity, our entanglement in an economy that kills, our inaction on climate change, our fueling of death-dealing violence with weapons of war and drug consumption, our obsession for power over the common good, our addiction to short-term results and eliminating opponents over the patient cultivation of social friendship, our indifference toward life, our racism. Addressing root causes means addressing these things, too.”

Bishop Seitz told Harris about the U.S. Catholic Church’s work recently during a meeting with bishops from Central America, as well as other Catholic nonprofits along the region and the U.S., including the Hope Border Institute in El Paso and Faith in Action, who have embarked on initiative seeking a solution to what the Biden administration, too, wants to address: the reasons forcing people en masse to leave their homelands.

Bishop Seitz spoke of an upcoming exchange of visits between bishops of the U.S. and those in Central America that may include a visit to Washington.

“I invite you to join us,” he told. “We need to work together, Madame Vice President.”

He told her to keep something in mind when thinking about the work of addressing “root causes” that force migration. 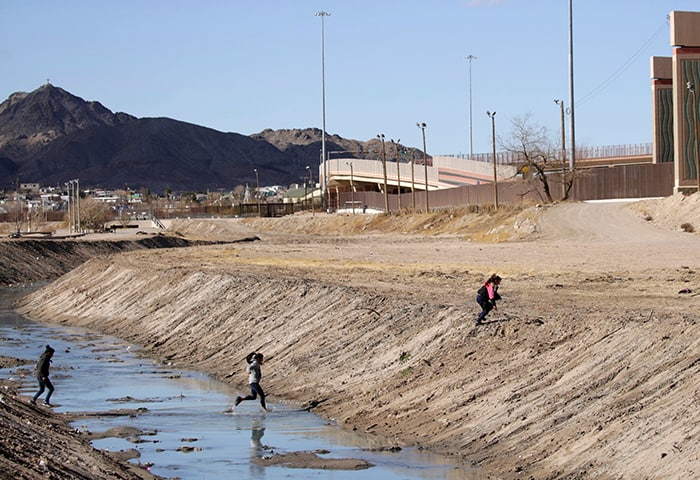 “As you do so, it is important for you to see the foreboding walls of steel that mark the southern boundary of this borderland community. And to see, beyond them, the suffering and aspirations that motivate people to leave family and homeland,” he said. “These are things that cannot be understood in the abstract, they must be experienced.”

But it also was important to address the plight of those who already are in the U.S., he told her, and to find a solution to their legal predicament.

“The sacrifices of the pandemic borne by our Dreamers, undocumented essential workers and their families, who ensured our health, nourishment and safety and made possible our recovery, must be matched by our standing with them in their struggle for citizenship,” he said.

“The Central American archbishop and martyr, Oscar Romero, once said that ‘there are many things that can only be seen through eyes that have cried,'” Bishop Seitz said. ” I invite you to touch the suffering flesh and hear the stories of those forced to approach the gates of this city seeking protection. We must stand with our neighbors in their struggle to be artisans of their futures.”

Harris thanked the bishop, who gave her a rosary blessed by Pope Francis during the canonization of St. Oscar Romero ceremony in 2018. The rosary was in a small box bearing a photo of the Salvadoran saint and the pope. 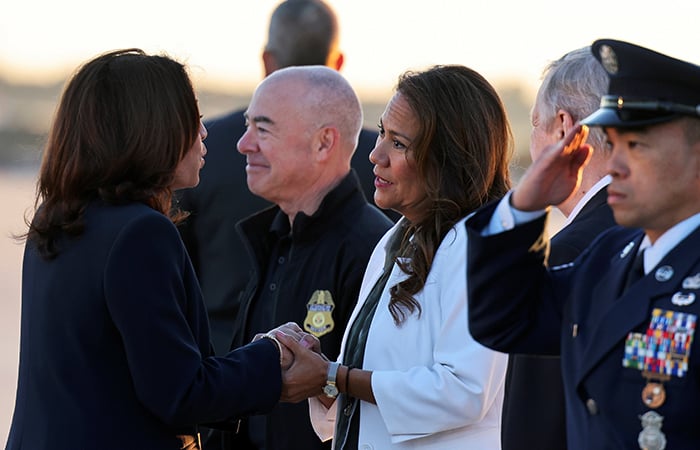 After Bishop Seitz gave her the rosary, it was “a very touching moment,” Corbett said. She quoted Micah 6:8: “You have been told, O mortal, what is good, and what the Lord requires of you: Only to do justice and to love goodness, and to walk humbly with your God.”

U.S. Secretary of Homeland Security Alejandro Mayorkas accompanied the vice president on the tour as did two Democrats from Congress, Senate Majority Whip Dick Durbin of Illinois and Rep. Veronica Escobar of Texas.

Harris was widely criticized by Republican groups — some who protested in El Paso — for not making the visit sooner and, later, for not visiting a different hot spot in Texas, near the McAllen and Brownsville area, which sees a lot of illegal border crossings, or another region in Arizona.

“It was always the plan to come here,” Harris said when reporters in Texas asked her to comment on the criticism she received. “And I think we’re going to have a productive day.”

The day included a visit to a processing center where she met with Border Patrol agents. There she said it had been her plan to visit the southern border after a trip to Mexico and Guatemala in early June, where she also was criticized, mostly by immigrant advocates, for sending a “do not come” message to Central Americans considering leaving their countries for the U.S.