Marian priest says St. Joseph is the model of renewal of fatherhood.

WASHINGTON (CNS) — St. Joseph is a strong role model for fathers because he was humble, he had an occupation and worked to provide for his family, and Jesus looked up to him, said Marian Father Donald Calloway.

“He was given the task of being the role model for the Messiah, for the God-man, so if there was ever anyone who could offer the example of what it means to be a father, to be a man,” it’s St. Joseph, he said.

Jesus, the Son of God, wanted to be like his earthly foster father, and “that’s extraordinary,” he added.

Since it was published in February 2020, over a million copies have been sold. It has been translated into 17 languages and remains on Amazon’s best-seller list.

In a June 14 interview with Catholic News Service from Steubenville, Ohio, Father Calloway said the numerous emails and letters he has received in response to his book illustrate that “people are just getting to know and love Joseph around the world.” 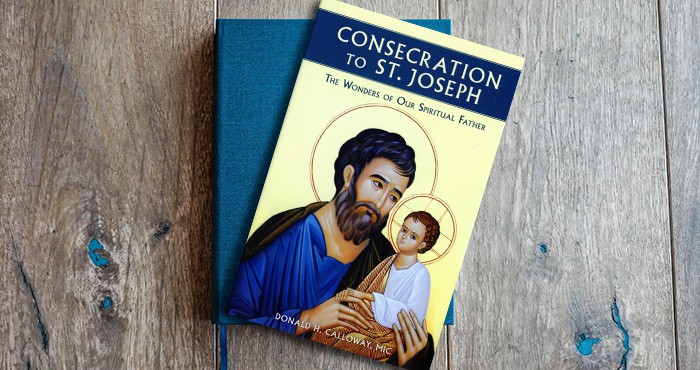 This is the cover of “Consecration to St. Joseph: The Wonders of Our Spiritual Father” by Marian Father Donald H. Calloway. Father Calloway says St. Joseph is the model of husband and father the church and world need today. (CNS)

Asked what qualities make the saint a good role model, Father Calloway replied: “I would definitely say his humility.”

“Obviously he had an occupation,” as a carpenter, and “he had to take care of his family, provide for his family and he never really got acknowledgment,” the priest said. “A lot of men going about their job (of) providing for their family don’t get a lot of credit or accolades (and) St. Joseph’s not particularly worried about a trophy.”

Biblical mentions of him come only in the first two chapters of Matthew and Luke.

In Joseph’s time, Father Calloway said, it was up to the husband, the father, to take the lead in the family’s observance of its religion — the leading of prayers, going to temple.

“The father was the initiator of that,” he said, so when the angel comes to the Holy Family to direct them to do this or that, “that angel comes to Joseph — not because he was more important but because he had the role of service and he does (what’s needed).”

“For men today, it’s a real challenge to be the spiritual leader of their family,” he added.

Father Calloway called it “a tragedy in our times that one-fourth of families today do not have a father. There are a lot of broken homes, families that are struggling. Now is time for the father to shine, to be that servant and sacrifice for others.”

The world needs that, and do does the church, he said. “We need good spiritual fathers. Now is the time for priests to be willing to serve, to lay down their lives. (Joseph) is the model of renewal of fatherhood across the board — in family and parishes.” 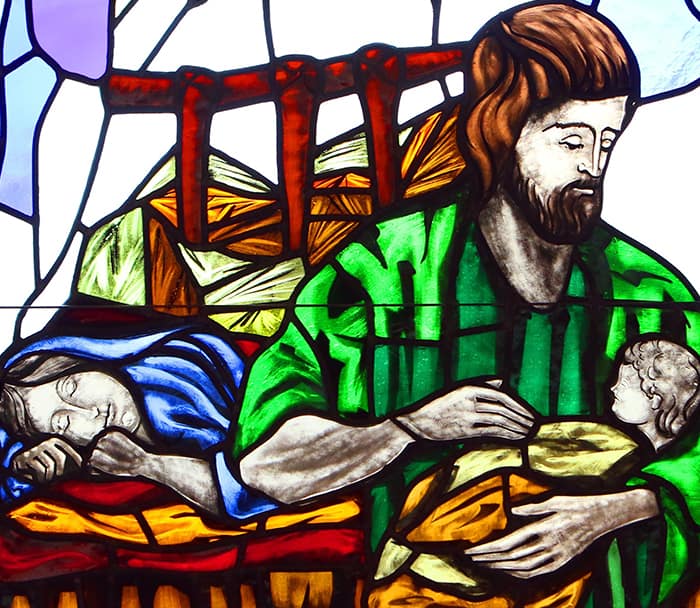 A depiction of St. Joseph cradling the infant Jesus while Mary sleeps is seen in a stained-glass window at St. Patrick Church in Smithtown, N.Y. (CNS photo/Gregory A. Shemitz)

In a February 2020 interview, Father Calloway told CNS his “greatest desire” was for the pope to declare a Year of St. Joseph for the entire church. “This would be an extraordinary grace for the church.”

He had even written the pope a personal letter the year before about how the church needed such a year “and it was hand-delivered to him by a bishop from Argentina. Thus, I know he is aware of this petition. Let’s pray he does it!””

Pope Francis proclaimed such a yearlong celebration dedicated to St. Joseph in a Dec. 8, 2020, apostolic letter, “Patris Corde” (“With a father’s heart”). He noted 2020 marked the 150th anniversary of Blessed Pius IX’s proclamation of St Joseph as patron of the universal church.

“I love St Joseph very much because he is a strong and silent man,” Pope Francis has said.

When he asked how he felt about the pope declaring the special year, Father Calloway joked, “I felt like the pope was my agent” for his book.

In all seriousness, though, the pope’s declaration was indeed an answer to his prayer.

In his book, “Consecration to St. Joseph,” Father Calloway urges individuals, couples, groups, schools, parishes, dioceses and the entire church to consecrate themselves to the saint. Besides his book, his website — https://www.consecrationtostjoseph.org — offers guidance and resources.

“We need his loving and strong fatherhood to help us return order to our homes,” Father Calloway added.

Featured image: Marian Father Donald Calloway, seen in an undated photo, says St. Joseph is the model of husband and father the church and world need today. The priest is the author of “Consecration to St. Joseph: The Wonders of Our Spiritual Father.” (CNS photo/courtesy Father Donald H. Calloway)