Charity and local clergy join with other voluntary agencies and faith leaders to assist however possible following the catastrophe.

MIAMI BEACH (CNS) — Staff members with Catholic Charities of the Archdiocese of Miami were on location and developing a response strategy June 24 near the stunning wreckage of a partially collapsed beachfront high-rise apartment building.

As of early June 25, some 159 people who lived in the 12-story building remained unaccounted for, according to local law enforcement officials.

Speaking by phone from the temporary reunification center for family, friends and displaced residents desperate for information about the collapsed Champlain Towers Condo in the beach town of Surfside, a senior director of community-based services for Miami Catholic Charities said she arrived at the “ground zero” site the afternoon the collapse.

“I have worked hurricanes, but nothing like this: It is just a look of sadness you see on everyone’s face. It is heartbreaking,” said Jackie Carrion, who said her agency is making temporary Catholic Charities housing and material assistance available following the catastrophe.

She told the Florida Catholic, Miami’s archdiocesan newspaper, the reunification center was buzzing with law enforcement, other charities and emergency response agencies, local religious chaplains including a Catholic pastor from Miami Beach, and distressed relatives and other people seeking updates on the situation.

The Surfside township north of Miami Beach is popular with a vibrant mix of South Americans, tourists, Orthodox Jews, Russians and others.

The Venezuelan Embassy in the U.S. said June 25 that it had learned six Venezuelan nationals were among the missing.

Miami Catholic Charities expected to add local counseling services for anyone in need and as members of the regional Catholic community began to say they knew someone who lived in the building. 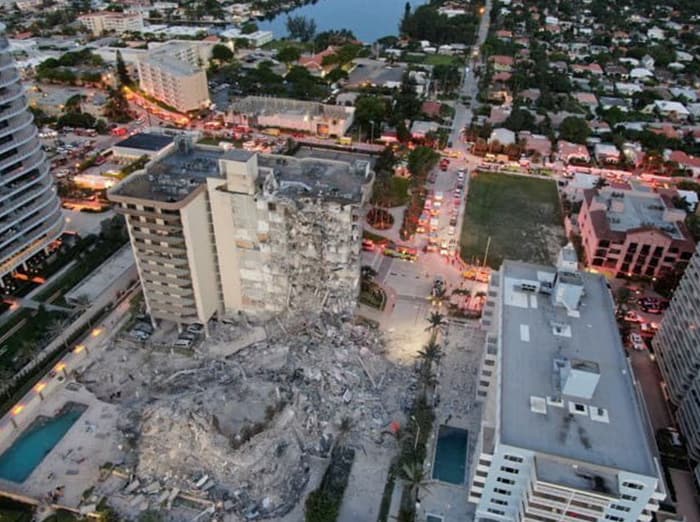 Video showing the building’s collapse in the early morning hours of June 24 and the subsequent news footage of the rubble brought to mind scenes of 9/11. At least four fatalities were confirmed early June 25.

Rescue workers had recovered 35 survivors from the wreckage, including a teenage boy and his mother.

There were about 55 units in the tower that collapsed, news reports said. An attached tower housing the remainder of the 136-unit complex remained standing but its residents were evacuated.

Law enforcement said they expected the death toll to climb higher as the slow work of search and rescue continued. The collapse occurred at 1:30 a.m. (local time) and left what has been described as a horrific pile of “pancaked” wreckage.

Teams of search and rescue personnel were working around the clock at the scene, while the community waited to learn what caused the event and if there will be more survivors.

“I saw a lot of families supporting each other (today),” Carrion said. “There was a moment when the police called for a member of each family to go into the building (for private consultation). People want to know what is happening to their relatives, friends and loved ones.”

Catholic Charities, she added, have three rooms currently available for temporary housing at its New Life Family Center housing development in downtown Miami and emergency food vouchers for survivors. Carrion was joined at the ground zero site by Father Juan Sosa, pastor of nearby St. Joseph Parish in Miami Beach. 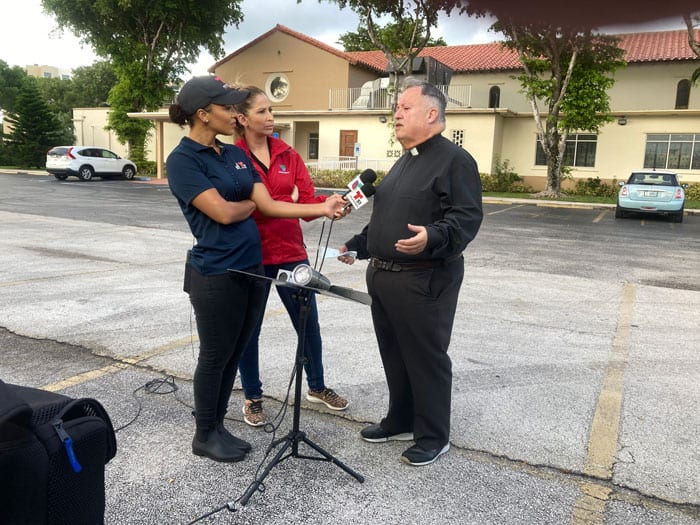 Father Juan Sosa, pastor of St. Joseph Church in Miami Beach, near the partially collapsed condo building in Surfside, Fla., speaks to the media before the 8 a.m. Mass June 25, 2021, which was offered for victims of the collapse. Father Sosa said 10 of his parish families who lived in the building were unaccounted for, while two others had been accounted for. (CNS photo/Tom Tracy, Florida Catholic)

“I was able to speak with Father Sosa, who mentioned he was there earlier that day as well, and while I was speaking with him someone approached him requesting some kind of assistance and he attended to them. There are a lot of people helping, assisting the families,” Carrion said.

In addition, St. Joseph Church offered its morning Mass June 25 for all those affected by the condo collapse.

Miami’s WSVN Channel 7 News reported late June 24 that a student from a local Catholic school, Msgr. Edward Pace High School, was among those pulled from the rubble, along with his mother. It was unclear what injuries the two sustained.

“We all woke up this morning learning about the tragic news of the partial collapse of a 12-story condominium in Surfside. Search and rescue teams continue to sift through the rubble to find survivors and to recover the bodies of those who did not. Our hearts go out to all those affected by the tragedy,” Archbishop Wenski said in a June 24 statement.

“Our Catholic Charities and local clergy have joined with other voluntary agencies and faith leaders to assist in whatever way they can,” the archbishop added.

Catholic Charities of Miami launched an appeal for financial contributions for those affected by the building collapse.

Tracy writes for the Florida Catholic, newspaper of the Archdiocese of Miami.