Maryknoll priest recalls the heroes he met as a first responder on Sept. 11, 2001

“How could this happen?” Those words rang out all around me—at Transfiguration Church, where I serve in New York City, and throughout the streets of Lower Manhattan. It was Sept. 11, 2001. No one could comprehend the reality that two commercial airplanes had crashed into the lofty Twin Towers of the World Trade Center. Those words summed up the fear, disbelief and anger we felt as we realized we were under attack.

Now, 15 years later, in a world threatened by terrorism we relive the horror of Sept. 11, 2001. But when I recall that day, along with the horror, I hold other images in my mind and heart.

I see staff members of the Millennium Hotel ministering to the burned, bruised and disoriented people fleeing the flaming North Tower as I arrived to give them spiritual comfort. I see the woman with seriously burned arms being escorted out of the building and calling to me, “Father, please call my daughter and tell her that I am alive.” She was the first of several victims who dictated phone numbers to me.

I see another woman who was brought out on a stretcher so severely burned that only part of her face was visible through the bandages. I prayed the Lord’s Prayer with her as her eyes moved in response.

I remember running to grasp the iron fence around St. Paul’s churchyard as the South Tower collapsed, and three other people clutching my leg as we were plunged into the darkness of falling debris. Silently we supported each other struggling to breathe.

I remember seeing the light again and the devastation all around us as so many of us rummaged through the area looking for survivors. I will never forget the police officer who emerged from the rubble and screamed orders for us to leave the street immediately as the North Tower threatened to also come down. Heeding his warning, I began heading toward Broadway. When air pressure suddenly pushed me several yards forward, I realized the North Tower had collapsed. That officer saved my life. 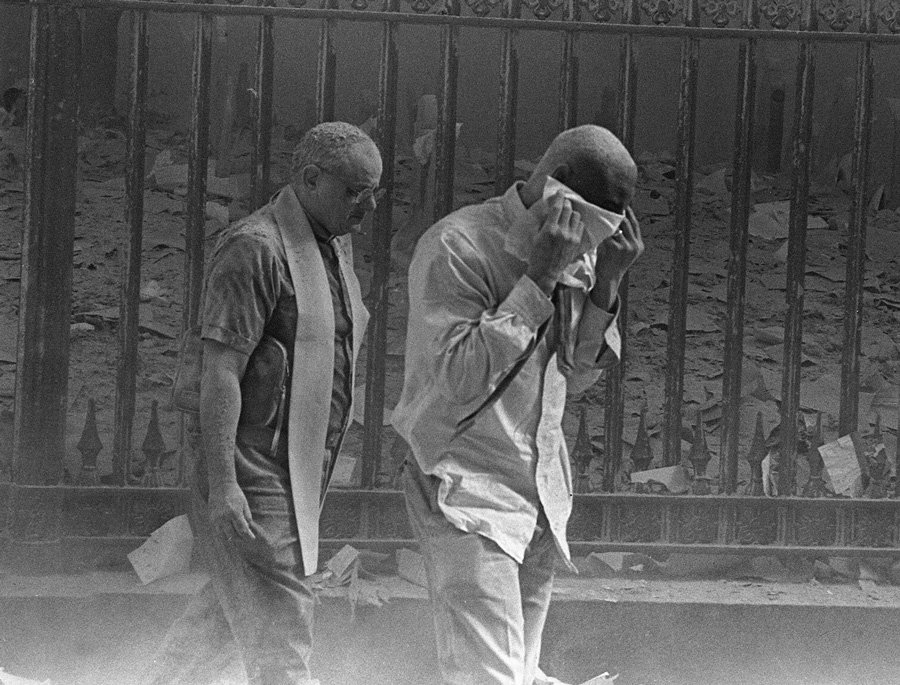 As I stumbled along covered with ash and with blood dripping from my nose, I remember ambulances stopping and the drivers offering to take me to the hospital. I refused and slowly made my way back to Chinatown. As I passed by the federal and county courthouses in Foley Square, I remember the court officers who attend the noon Mass at Transfiguration Church recognizing me. I picture them running up the steps to get a water cooler tank and returning and pouring the water over me to try unsuccessfully to remove the mysterious ash material that covered me from head to toe. I visualize more and more people, both uniformed and not uniformed, appearing to help those in need in this chaotic and confusing situation.

I remember the looks of horror and compassion on people’s faces as they saw me, still ash covered, walking up the hill adjacent to Transfiguration. At the school, where the children had been purposely kept unaware of the tragedy, some of them cried when they saw me. I cried too. The parish staff was visibly relieved I had survived.

Then came the days and days of funerals for firefighters, executives, office workers and those we knew. Amid the unspeakable pain and mourning, I remember rescue workers, volunteers and visitors from around the world who came to lend a hand and grieve with us.

Today when you visit the site of the 9/11 World Trade Center disaster, you will see that the beauty of the reflecting pools is an expression of what we want to remember about 9/11: the sacrifice and heroism of the people that far outweigh the hate of those intent on destroying us.

I think that each of us in our own way will have the opportunity to experience a 9/11 in our lives, when we are called to risk all we have for the good of others, knowing that they would do the same for us. For me that is the story and meaning of 9/11.

Father Raymond Nobiletti, from Brooklyn, New York, was ordained a Maryknoll priest in 1969 and served in mission in Hong Kong. In 1991, he was assigned to Transfiguration Parish in Chinatown, New York City, and he was a first responder to the attack on the World Trade Center on Sept. 11, 2001. He passed away in July 2021 at Maryknoll, New York.