More than 5,000 people have fled fighting between the Venezuelan army and cocaine traffickers and are stuck in a remote Colombia border town.

BOGOTÁ, Colombia (CNS) — Church groups in Colombia are mobilizing to support thousands of Venezuelan refugees who recently fled a military offensive and are stuck in a remote Colombian border town.

More than 5,000 people are currently sleeping in shelters in Arauquita as fighting between the Venezuelan army and rebel groups that traffic cocaine continues just a few miles away in the Venezuelan state of Apure.

The refugees have accused the Venezuelan army of arresting people without warrants and looting homes, as they try to root out a group of rebels. Refugees also are scared of getting caught in the crossfire. Since fighting broke out in late March, nine rebels and eight soldiers have been killed, according to the Venezuelan government, which has sent tanks and fighter jets to the area.

“We left within half an hour of seeing the planes, because we were afraid bombs could fall on us,” said a refugee from the Venezuelan town of La Victoria, who wanted to be identified only as Gabriel.

He took a boat and crossed the river with his wife and two daughters, landing in Arauquita.

“We’ve had neighbors whose homes have been broken into, and my wife doesn’t want us to go back because she’s afraid the soldiers could grab me,” Gabriel told a local TV network, VPI.

In Arauquita, which has a population of 30,000, the Arauca department government declared a state of emergency to speed up fundraising for refugees. 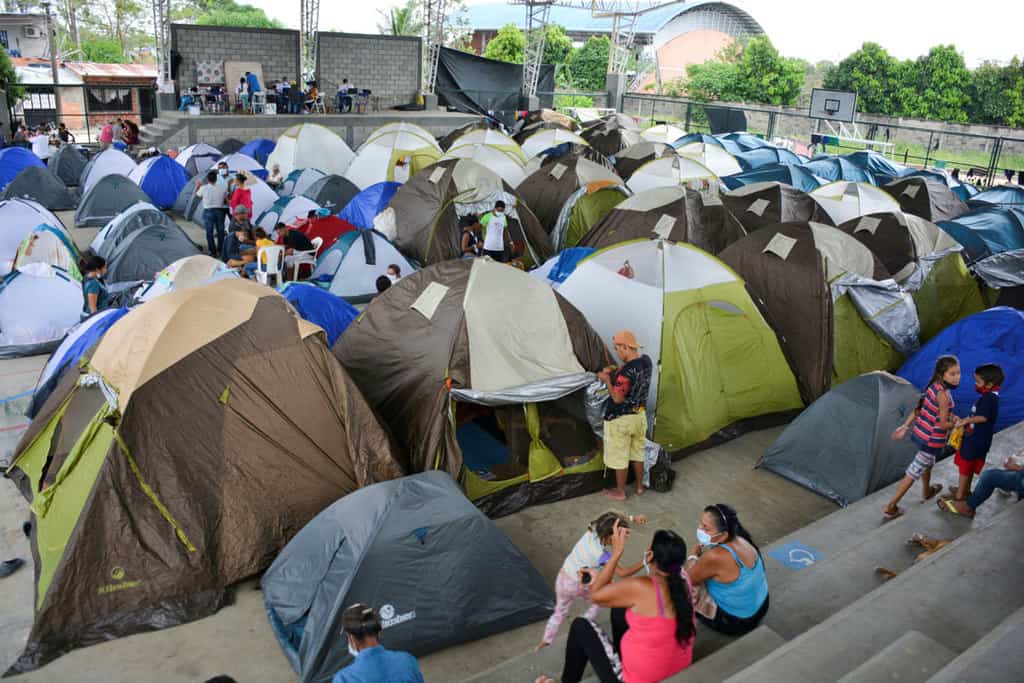 Venezuelan refugees are seen inside a coliseum in Arauquita, Colombia, April 5, 2021. A temporary camp was set up after the Venezuelans fled their country due to a military offensive. (CNS photo/Reuters)

Laureano Daza, director of Caritas in Arauca, said a school, a local basketball gym and a soccer field in Arauquita have been turned into shelters that are holding about 700 people. Daza said the rest of the refugees are staying in local homes.

“People are showing a lot of solidarity,” he said. “But there is also a lot of overcrowding.”

Daza said there is no knowing when the fighting will stop or when it will be safe enough for the displaced families to return to Venezuela.

He said Caritas has helped about 600 people with food and sanitation kits that include face masks, toothbrushes, soap and women’s sanitary supplies for women, which sometime are scarce in Venezuela.

This support has been delivered mostly to families escaping to Colombian villages along the Arauca River, which marks the border between both countries. In Arauquita, the U.N. Refugee Agency and the World Food Program provide support to the recently arrived refugees.

In Bogotá, Bishop Héctor Fabio Henao, director of Caritas Colombia, called for greater solidarity with this group of refugees and asked people to donate to a church fund for Venezuelan migrants.

“These are people who are in need of international protection,” Bishop Henao said in an interview published on the bishops’ conference website.

More than 5 million people have left Venezuela since 2015 as the country’s economy implodes following years of mismanagement that has led to food shortages, hyperinflation and the lowest wages in Latin America. 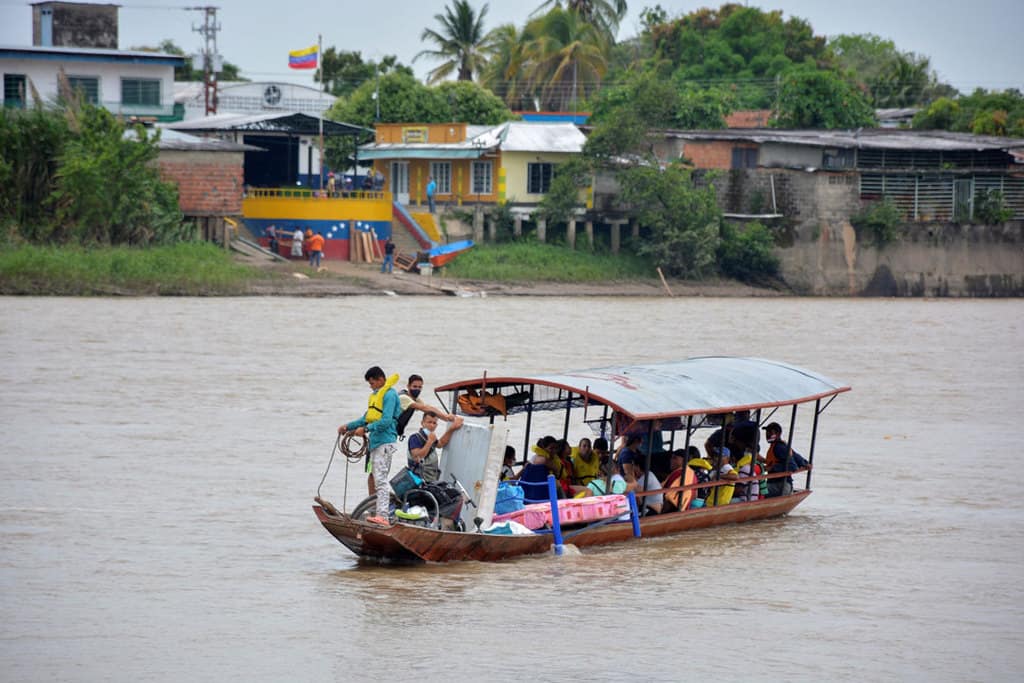 Colombia has received about a third of these migrants and refugees, and its government recently passed a law that will provides work permits, access to health care and a path to permanent residency to 1 million Venezuelans who are currently undocumented.

But only Venezuelans who arrived in Colombia before March, or who enter the country legally, are eligible for the protection.

Daza said the situation in Arauquita will present officials with a new set of challenges.

“Some of these refugees will want to settle in Colombia now and stay with relatives in other parts of the country,” Daza said. “They will need help with transport to get there” and with documentation.

For years, the area around Arauquita has been fought over by rebel groups that move drugs and have a presence on both sides of the border.

Colombia’s defense minister said fighting is currently taking place because the Venezuelan army has decided to push one of these groups out of the area, in order to hand control of local drug trafficking routes to a group led by Iván Márquez, a Colombian rebel who abandoned a 2016 peace deal with Colombia’s government.

Venezuela’s socialist government denies it is staging alliances with rebels and says Colombia is to blame for the violence because it is not doing enough to dismantle armed groups on its side of the border.

Venezuela’s defense minister says his country is fighting terrorists who “have the support of Colombia and the CIA.”

Featured image: Venezuelan refugees walk down a street in Arauquita, Colombia, April 5, 2021, after fleeing their country due to a military offensive. Church groups in Colombia are mobilizing to support thousands of Venezuelan refugees who recently fled the military offensive and are now stuck in the remote Colombian border town. (CNS photo/Reuters)