With both of his arms stretched forward, he pushed a stroller that carried his 2-year-old son while carrying his belongings in a blue backpack that hung from his shoulders.

Piñeros was making a 1,500 mile-long trek to Ecuador, where his family had been offered work in a farm. He left his hometown of Caracas, Venezuela, in the middle of September, on foot, because he could not afford a bus ticket.

“In Venezuela, we could no longer feed our children properly,” said Piñeros, who had been walking with his wife and three children for two weeks.

“It may not be the best time to travel,” he admitted. “But we are willing to do anything to improve our quality of life.”

Thousands of people are once again leaving Venezuela as neighboring countries like Colombia, Ecuador and Peru reopen their economies and lift restrictions related to the coronavirus pandemic.

Jan Piñeros pushes a stroller carrying his 2-year-old son as he walks along a road leading to Pamplona, Colombia, in late September. Pineros and his family were walking from Venezuela to Ecuador, where they had been offered work on a farm. (CNS photo/Manuel Rueda)

The poorest are leaving on foot, and joining 5 million people who have already left Venezuela to escape hyperinflation, food shortages and the lowest wages in the Western Hemisphere.

This new wave of migration has prompted church groups in Colombia to reactivate aid programs that had been suspended this spring, as lockdowns slowed down Venezuelan migration.

In the Colombian border city of Cucuta, by the end of October the local diocese plans to have distributed bags with food, face masks and sanitizing gel to 4,000 migrants walking along roads that lead out of the city. The supplies were purchased with the support of Caritas Poland, a local supermarket chain and the Vatican’s Dicastery for Promoting Integral Human Development.

“What worries us is that there are many more families on the road now,” said Msgr. Israel Bravo, vicar general of the Diocese of Cucuta. “Before it used to be mostly men, but migrants are now bringing their families.”

The pandemic has made leaving Venezuela harder.

Gasoline shortages force migrants to walk for weeks just to reach the border. In Colombia, municipal governments have ordered shelters and soup kitchens to shut down in a bid to prevent large gatherings.

To make the journey less dangerous, some church groups are trying to provide migrants with assistance along the toughest stretches of the road. 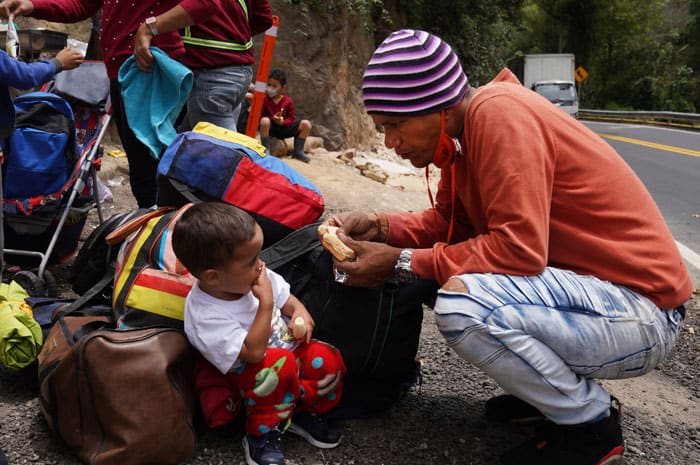 Venezuelan migrant Jan Piñeros of Caracas shares a meal with his son as they rest in early October in Pamplona, Colombia. Pineros and his family were making a 1,500-mile-long journey, on foot, to Ecuador. (CNS photo/Manuel Rueda)

In the mountain town of Pamplona, Caritas France is supporting a program run by the local diocese that provides orientation, food and clothes for cold weather to Venezuelan migrants.

Pamplona is located at 10,500 feet above sea level and gets cold at night. It’s one of the first stops along a mountainous road that leads into the center of Colombia.

“We had four shelters here in Pamplona, but all of them were shut down because of the pandemic,” said Angie Rincon, coordinator of Let’s Share the Journey, the project financed by Caritas France.

“There is a lot of frustration among the migrants because they expected support that is no longer there,” Rincon said.

Her project is providing 8,000 migrants with backpacks that contain energy bars, toiletries, gloves and ski masks for the cold weather.

The project is also trying to organize transport on buses across the freezing Paramo de Berlin, a plateau located at an altitude of 13,000 feet that separates Pamplona from the center of Colombia. But that has not been possible yet, Rincon said, because of regulations imposed by the Colombian government since the pandemic broke out.

“Bus companies are only allowed to take migrants with residence permits or with stamped passports,” Rincon explained. “That’s very hard to obtain nowadays.”

Colombia has shut down border crossings with Venezuela since the pandemic started. Most migrants now entering Colombia are using illegal crossings controlled by criminal groups.

Many reported having to pay bribes to these groups to get across the border. Some had to give up most of the cash they carried with them.

“We had to pay about $5 each and give them our cellphones,” said Englis Ochoa, a 17-year-old who was traveling with her mother to the city of Cali, where they hoped to find work. They were trying to get a ride outside a gas station near Pamplona. “We had a Samsung Galaxy and a Motorola.” 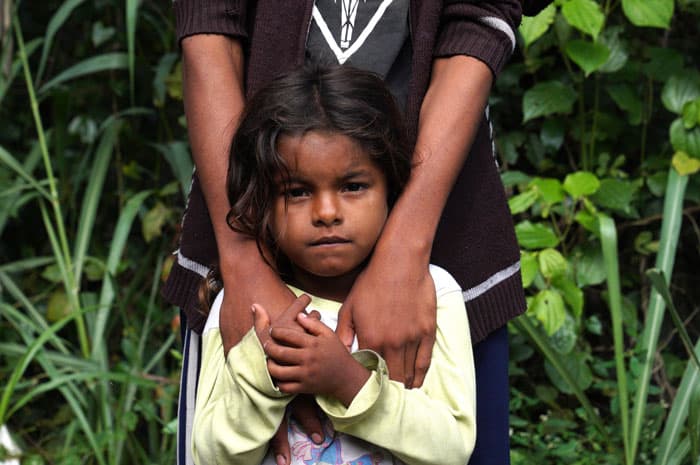 A migrant girl rests on the road leading to Pamplona, Colombia, in early October. Her family was walking from the Venezuelan state of Portuguesa to the Colombian city of Bucaramanga, where they hoped to find work. (CNS photo/Manuel Rueda)

Despite the risks and hardships encountered along the journey toward cities in Colombia, Ecuador and Peru, humanitarian groups expect large numbers of Venezuelans to leave their country in the following months.

Colombian immigration officials said in September that around 200,000 Venezuelans could enter the country before the end of this year. The minimum wage in Venezuela is currently less than $2 a month, while in Colombia and Peru, it’s about $250 a month.

“We can stay in Venezuela and die of hunger, or come here to find a solution,” said Carlos Olivera, a 44-year-old construction worker who was walking along the highway with his family.

“I think God will help us,” Olivera said. “He helps those who persist.”

A worker for the humanitarian group Consornoc registers Venezuelan migrants arriving in late September in Pamplona, Colombia. Consornoc hands out backpacks with food that are supplied by Caritas France. (CNS photo/Manuel Rueda) 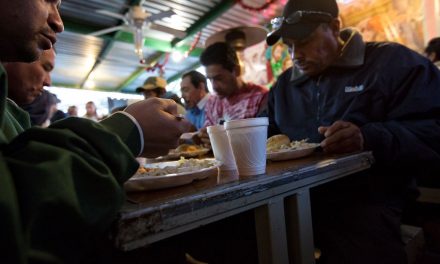 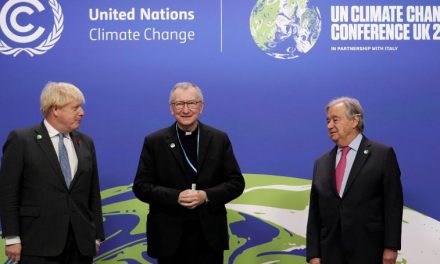 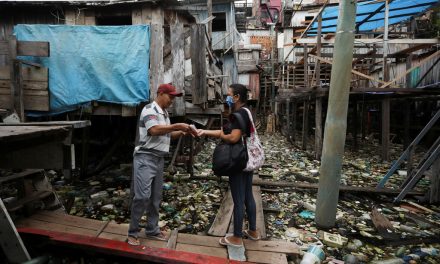 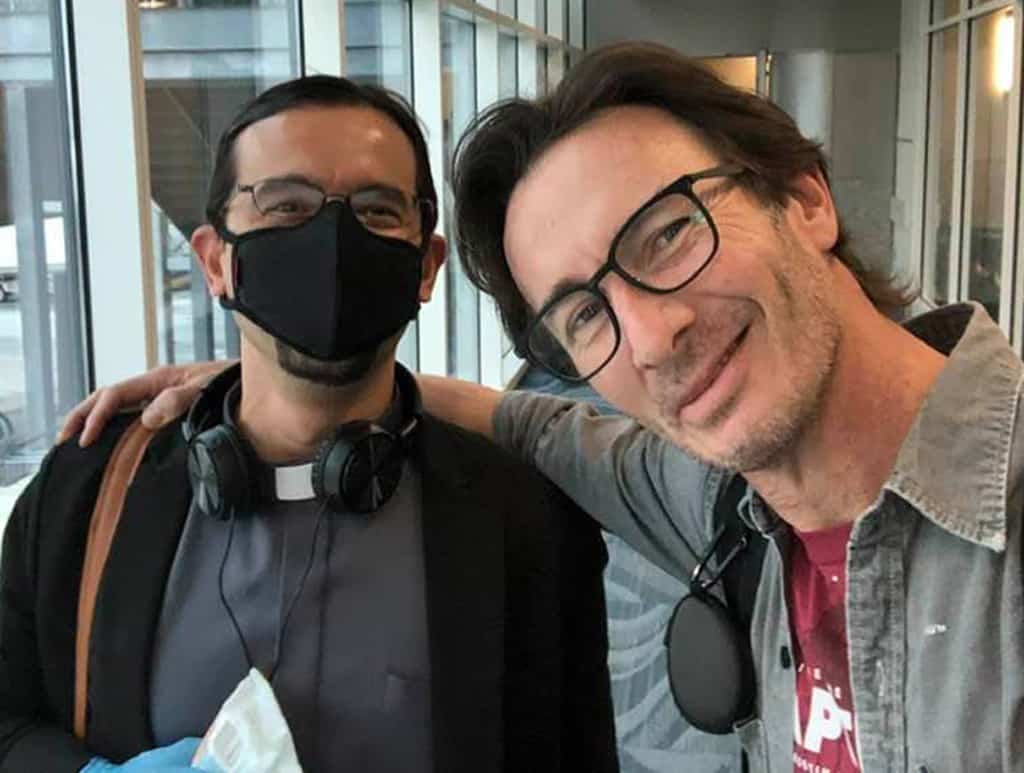 Getting home in the time of coronavirus