Living “human fraternity” is a process that requires effort, emphasis and repetition, the pontiff adds.

ABOARD THE PAPAL FLIGHT FROM IRAQ (CNS) – The Catholic Church’s commitment to dialogue with other churches and with other religions flows from the Gospel, but Pope Francis said he knows some Catholics disagree.

“Often you must take a risk” to promote harmony, he told reporters March 8 as he flew back to Rome from Baghdad. “There are some criticisms: ‘The pope isn’t courageous, he’s reckless.’ He’s doing things against Catholic doctrine. He’s a step away from heresy.'”

Still, he said, through prayer and listening to the advice of experts and aides, he has become convinced that God wants the church—and all humanity, for that matter—to continue promoting a sense of belonging to one human family.

And, he said, it does not matter if some religions, sects or groups seem further from sharing that vision.

“The rule of Jesus is love and charity,” the pope said. “But how many centuries did it take us to put that into practice?”

Preaching and living “human fraternity”—recognizing that all men and women, created by God, are members of the same human family and brothers and sisters to one another—Is a process that requires effort, emphasis and repetition.

“You are human. You are a child of God. You are my brother or sister,” the pope said.

With sporadic violence continuing in Iraq, the pope’s trip March 5-8 involved a massive security operation with the deployment of thousands of police and military officers. Even the Vatican police and Swiss Guards wore bulletproof vests under their dark suits, an unusual practice on a papal trip. 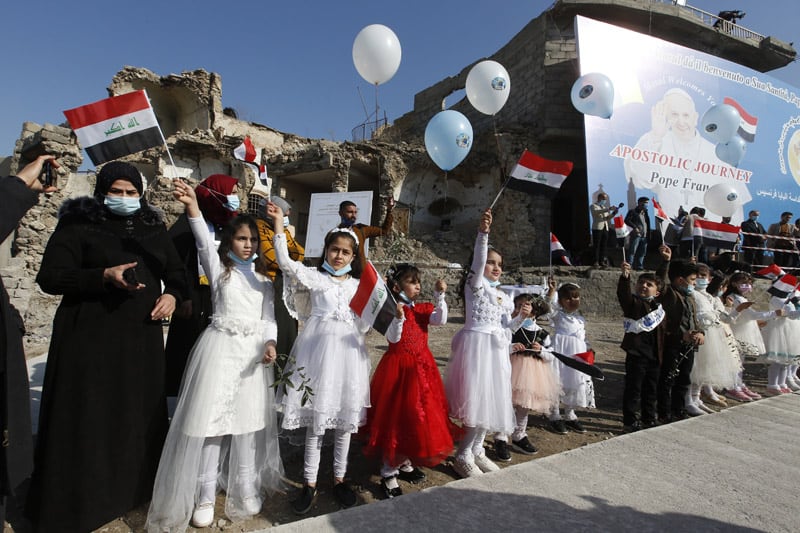 Children wave Iraqi flags before Pope Francis’ arrival for a memorial prayer for the victims of the war at Hosh al-Bieaa (church square) in Mosul, Iraq, March 7, 2021. (CNS photo/Paul Haring)

But the other danger was posed by COVID-19 and the risk that people gathering to see the pope, who has been vaccinated, would create a surge in the already-rising number of cases in Iraq.

Pope Francis said the pandemic—not the security issue—was what made him repeatedly think, “maybe, maybe not” about the visit.

Decisions about foreign trips are “stewed over time,” the pope said. “I thought so much, prayed so much” about the Iraq trip because of the coronavirus pandemic, “and in the end I made the decision freely, but it came from within. And I said to myself the one who helped me decide this will take care of the people.”

And even though many experts do not expect the pandemic to be resolved by the fall, Pope Francis said he has promised to go to Budapest, Hungary, for a day in September to celebrate the closing Mass of the International Eucharistic Congress, which was postponed from 2020.

The other trip he would like to make soon, he said, is a visit to Lebanon.

Cardinal Bechara Rai, patriarch of the Maronite Catholic Church, even asked him to stop in Lebanon on the way to or from Iraq, the pope said, but doing that would seem like giving the Lebanese people “crumbs” given how they are suffering. 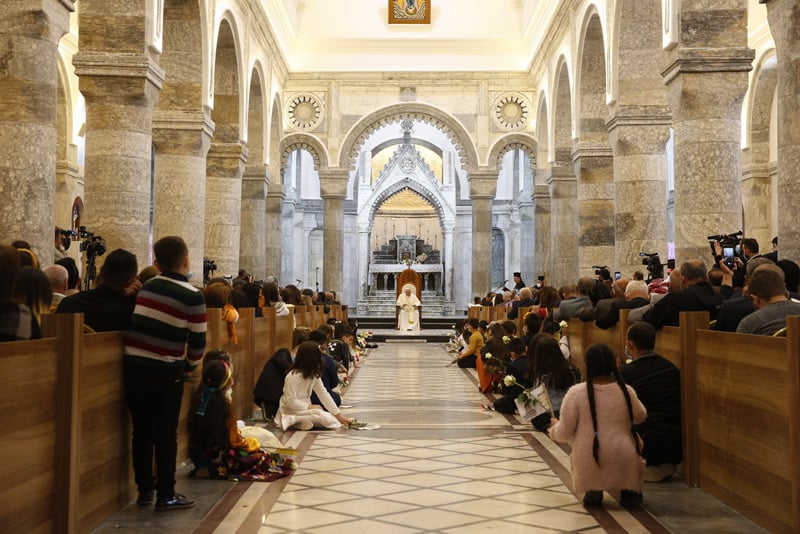 Pope Francis visits with the community at the Church of the Immaculate Conception in Qaraqosh, Iraq, March 7, 2021. (CNS photo/Paul Haring)

Asked about his meeting March 6 in Najaf with Ayatollah Ali al-Sistani, an authority figure for Shiite Muslims in Iraq and around the world, Pope Francis described him as “a great man, a wise man, a man of God.”

The meeting, he said, “was good for my soul” and was another step on the path of promoting greater understanding and cooperation with Muslims.

The day after meeting the ayatollah, Pope Francis traveled to Mosul, a city terrorized and left largely in ruin by Islamic State militants who controlled the area from 2014 to 2017.

Even though he said he had seen photos of the ruined churches of Mosul, Pope Francis said standing amid the rubble was “unbelievable, unbelievable.”

But even more touching, he said, was the testimony of survivors, including of a mother who lost a son, who spoke about the importance of forgiveness and of rebuilding.

“We are so great at insulting people and condemning them,” he said, but too many people have forgotten the power of forgiving others.

Asked when, if ever, he will make a trip to Argentina, Pope Francis repeated that he imagined either dying or resigning and remaining in Rome, “my diocese.”

He joked that he had spent 76 years in Argentina and didn’t see why people wanted him to spend more time there.

But, denying he had what he termed “patrio-phobia,” he told reporters that he had planned a trip to Argentina, along with Chile, in November 2017. However, the trip was pushed back to January 2018 because of elections in Chile. And January in Argentina would have been just too warm. 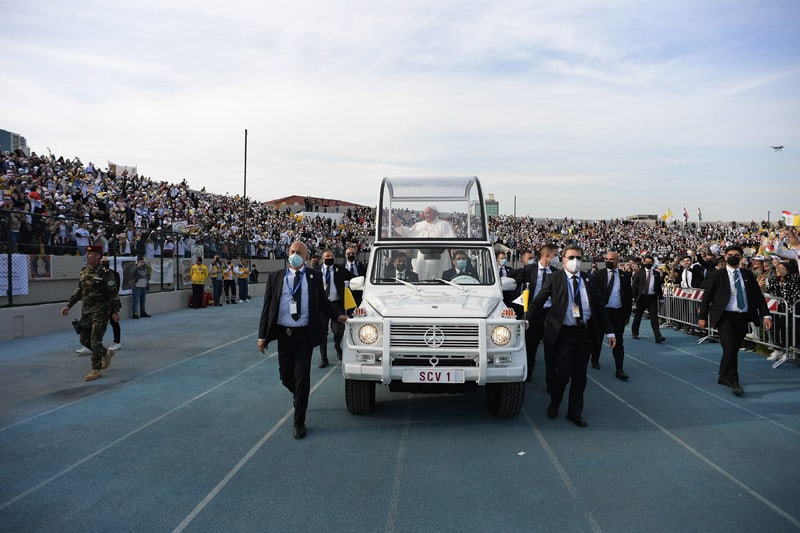 “I don’t know if the trips will slow down now, but I can tell you that on this trip, I’ve felt more tired,” he said, adding that being 84 comes with some baggage.

However, he said, he does enjoy being with people, especially “after these months of imprisonment” because of the pandemic and the lockdown in Italy.

“I feel different when I am far from the people,” he said, adding that he would continue to follow the recommendations of government health authorities as far as holding general audiences or other events that could attract a large public.

“Closeness to the people of God” is an essential part of being a priest, the pope said. “The only ones who save us from pride are the holy people of God,” otherwise priests run the risk of acting like “an elite caste.”

Aboard the papal plane, Pope Francis talks about his trip to Iraq. (Catholic Nesws Service’s video)